The Impact of Child Abuse

Most people don't talk about it; being an adult survivor of child abuse, that is. There are millions of adults walking around today who are victims of physical abuse, sexual abuse, emotional and psychological abuse that started when they were young children.

Child abuse already is known to increase the risk of suicide. And a new Mayo Clinic study indicates that a history of child abuse not only can lead to depression, substance abuse and personality disorders, but child abuse makes most psychiatric illnesses worse," according to Magdalena Romanowicz, M.D., lead author of the study.

We'll be exploring that more on tonight's HealthyPlace TV show.

For 21 years, Diane Champe was isolated by her parents and mentally, physically, emotionally and sexually abused. "I was so brutally traumatized that I was covered from the top of my head to the bottom of my feet with hives and the pupils in my eyes were usually dilated."  Diane is now 58 and has been through 23 years of therapy, 5 psychiatric hospitalizations, a divorce, a lawsuit against the company that fired her and after all that, she says "I'm a winner."  She'll be here to share her story about the impact child abuse had on her and how she came out on top.

In the second half of the show, you get to ask Dr. Harry Croft, your personal mental health questions.

Also in June on HealthyPlace TV

"Being in an unhealthy relationship stinks," writes Suzi, a new visitor to the HealthyPlace.com website. In her email, she discusses her predicament of being stuck with all the household chores, always being put down, yet she says "I find it difficult to leave him."

Sometimes though, the difference between a healthy and unhealthy relationship isn't as clear cut as Suzi's situation.

So what can you do to when you're in an unhealthy or abusive relationship?

And how do you create healthy relationships?

Living with a Mental Illness

For some, living with depression, anxiety, bipolar disorder, ADHD or other mental illness is extremely rough. But, others somehow manage to survive and thrive. How is that?

Having a family member with a mental illness can also be extremely wearing.

Stress and Challenges of Parenting a Child with a Mental Illness 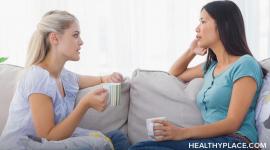 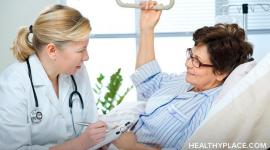 Self-Advocate for Your Mental Health: How to Talk to Doctors

How to Stop Comparing Yourself to Others

How to Diagnose Mental Illness

Wondering: "Do I Have Anxiety?"