Why is Ritalin prescribed?

Ritalin and other brands of methylphenidate are mild central nervous system stimulants used in the treatment of attention deficit hyperactivity disorder in children. With the exception of Ritalin LA, Concerta and Metadate CD, these products are also used in adults to treat narcolepsy (an uncontrollable desire to sleep).

Most important fact about Ritalin

Excessive doses of this drug over a long period of time can produce addiction. It is also possible to develop tolerance to the drug, so that larger doses are needed to produce the original effect. Because of these dangers, be sure to check with your doctor before making any change in dosage; and withdraw the drug only under your doctor's supervision.

How should you take Ritalin?

Follow your doctor's directions carefully. It is recommended that methylphenidate be taken 30 to 45 minutes before meals. If the drug interferes with sleep, give the child the last dose before 6 p.m. Ritalin-SR, Ritalin LA, Metadate CD, Methylin ER, and Concerta are long-acting forms of the drug, taken less frequently. They should be swallowed whole, never crushed or chewed. (Ritalin LA and Metadate CD may also be given by sprinkling the contents of the capsule on a tablespoon of cool applesauce and administering immediately, followed by a drink of water.)

Give it to the child as soon as you remember. Give the remaining doses for the day at regularly spaced intervals. Do not give 2 doses at once.

Keep out of reach of children. Store below 86 degrees Fahrenheit in a tightly closed, light-resistant container. Protect Ritalin-SR from moisture.

What side effects may occur when taking Ritalin?

Side effects cannot be anticipated. If any develop or change in intensity, inform your doctor as soon as possible. Only your doctor can determine if it is safe for you to continue giving this drug.

These side effects can usually be controlled by reducing the dosage and omitting the drug in the afternoon or evening.

Why should Ritalin not be prescribed?

This drug should not be prescribed for anyone experiencing anxiety, tension, and agitation, since the drug may aggravate these symptoms.

Anyone sensitive or allergic to this drug should not take it.

This medication should not be taken by anyone with the eye condition known as glaucoma, anyone who suffers from tics (repeated, involuntary twitches), or someone with a family history of Tourette's syndrome (severe and multiple tics).

This drug is not intended for use in children whose symptoms may be caused by stress or a psychiatric disorder.

This drug should not be taken during treatment with drugs classified as monoamine oxidase inhibitors, such as the antidepressants Nardil and Parnate, nor for the 2 weeks following discontinuation of these drugs.

Your doctor will do a complete history and evaluation before prescribing this drug. He or she will take into account the severity of the symptoms, as well as your child's age.

This drug should not be given to children under 6 years of age; safety and effectiveness in this age group have not been established.

There is no information regarding the safety and effectiveness of long-term treatment in children. However, suppression of growth has been seen with the long-term use of stimulants, so your doctor will watch your child carefully while he or she is taking this drug.

Blood pressure should be monitored in anyone taking this drug, especially those with high blood pressure.

Some people have had visual disturbances such as blurred vision while being treated with this drug.

The use of this drug by anyone with a seizure disorder is not recommended. Be sure your doctor is aware of any problem in this area. Caution is also advisable for anyone with a history of emotional instability or substance abuse, due to the danger of addiction. 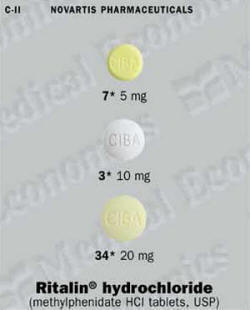 If this medication is taken with certain other drugs, the effects of either can be increased, decreased, or altered. It is especially important to check with your doctor before combining this drug with the following:

Antiseizure drugs such as phenobarbital, Dilantin and Mysoline
Antidepressant drugs such as Tofranil, Anafranil, Norpramin, and Effexor
Blood thinners such as Coumadin
Clonidine (Catapres-TTS)
Drugs that restore blood pressure, such as EpiPen
Guanethidine (Ismelin)
MAO inhibitors (drugs such as the antidepressants Nardil and Parnate)
Phenylbutazone

The effects of Ritalin during pregnancy have not been adequately studied. If you are pregnant or plan to become pregnant, inform your doctor immediately. It is not known if this drug appears in breast milk. If this medication is essential to your health, your doctor may advise you to discontinue nursing your baby until your treatment with this medication is finished. 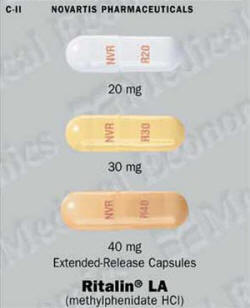 The average dosage is 20 to 30 milligrams a day, divided into 2 or 3 doses, preferably taken 30 to 45 minutes before meals. Some people may need 40 to 60 milligrams daily, others only 10 to 15 milligrams. Your doctor will determine the best dose.

These tablets keep working for 8 hours. They may be used in place of Ritalin tablets if they deliver a comparable dose over an 8-hour period.

This drug should not be given to children under 6 years of age.

The usual starting dose is 5 milligrams taken twice a day, before breakfast and lunch; your doctor will increase the dose by 5 to 10 milligrams a week. Your child should not take more than 60 milligrams in a day. If you do not see any improvement over a period of 1 month, check with your doctor. He or she may wish to discontinue the drug. 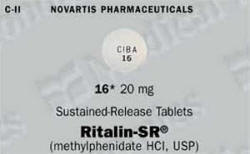 These tablets continue working for 8 hours. Your doctor will decide if they should be used in place of the regular tablets.

The recommended starting dose is 18 milligrams once daily in the morning. At weekly intervals, your doctor may increase the dose in 18-milligram steps, up to a maximum of 54 milligrams each morning.

Your doctor will periodically discontinue the drug in order to reassess your child's condition. Drug treatment should not, and need not, be indefinite and usually can be discontinued after puberty.

If you suspect an overdose of Ritalin, seek medical attention immediately. 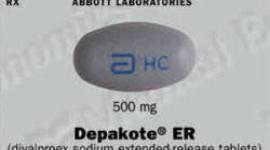 How to Offer Mental Health Support to Someone Who Rejects It