Fear of Flying? Try This

I Was Afraid of Flying

The fear of flying is a common fear. I had it in the worst way. For me, like many others, fear of flying especially increased after 9/11. I thought about being in a plane crash a lot. A lot, a lot. Every time I heard a plane fly over, the video ran in my mind of myself sitting in an airplane after having just found out we were going to crash.

My Fear of Flying Scenario 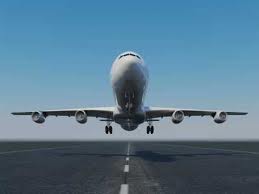 There I am, in crash position (because after all I am a rule follower) with all awareness that I was falling helplessly to my demise. And I am: Totally. Freaking. Out. Desperately, frantically wishing I was anywhere, anywhere else but here.

The second common fear of flying scenario that played on my internal DVD player was crashing and surviving--albeit for only a few agonizing days-- on a deserted island, injured, with decomposing corpses and more dying people all around me.

I was terrified of the time I would live through that. Death would be a welcome escape from the trauma of what I’d be witnessing and soon expected for myself. It is similar to the phenomenon where abused people antagonize their abuser. When the anxiety of pending abuse becomes overwhelming, they encourage it to finally come already, to relieve the anxiety of anticipation. They can handle the pain better than the expectation of impending pain. The pain known is better than pain unknown.

I feared the time I spent knowing my end was imminent and the fact that there wasn’t anything I could do about it. I feared having nothing to comfort me through the suffering, when I was out of my mind in panic. How else would I be?

I understand that many people in the world have lived and died through similar terrifying situations of unjust torture or slow “unbearable” deaths; in war, during accidents or through natural disasters. I don’t know what it is like, but I can imagine how petrified I would be. In fact, I was imagining it every day and it was taking up a lot of my time and head space. I had to do something about it, especially because I was planning a trip to Australia by plane.

Geneen Roth, author of Women, Food and God writes, “If you take anything to the end, you’ll find God.” So in my recovery from anxiety, I needed to take this fear of flying to the end. In doing so, I needed to take these ‘fantasies’ to the end to see what was there besides the story of fear and suffering. Ugh! Death and decay was not a pretty place to go, how would I find the Light there? Where was the Goddess in a plane crash?

Get a Different Perspective

I invited myself to view these crash scenes from ‘above the battleground.’ From this audience position, I was away from the overwhelming chaos of the scenario and I could see it symbolically. Being a person who believes that things happen for a reason and that what matters most is how we respond, this distance helped immensely.

From here, I wondered what might be the point of surviving a crash injured and dying, watching death and decay around me until I succumbed to death myself. If I saw experience as merely a step on my spiritual path, then the point of living through this atrocity would be some learning I would extract from the experience. I figured the lesson would be realized in the actions that I took. Some evolvement of my soul could occur as I responded conscienciously to the situation.

I imagined the choices I could make and the actions I could take in those few days post crash. I didn’t have to just lie there and take it. There were contributions I could make to my fellow survivors such as comforting them, attending their injuries and sharing food. This line of thinking changed my focus to what I could affect rather than what I couldn’t. Originally, the fear made me feel completely out of control, but realizing I could respond pacified my panic.

That we have the power to be agent in our lives is called personal agency. Despite what happens to us, we always have the capacity to respond. Even plummeting to my doom, I can always take some action; like hold the hand of the person next to me and tell them I appreciate them. In every situation, I have opportunity to learn something. And, when there is no other choice, no matter what it is that is happening to me, I will always be able to say a prayer.

Affirmations in Preparation for a Flight

Several times a day, I pictured myself in the plane, feeling calm, safe, and laughing. I saw myself having fun on the plane, rather than that video of me panicking. Within two weeks, my fear was almost completely gone.

I got on the plane to Australia (4 flights taking 30 hours to get there), felt well, and ended up laughing at some videos shown inflight. I created my reality by my imagination. We can create situations of fear or pleasure by our thoughts, feelings, and expectations. Why chose fear?

Now I take flights with no problem. Have you ever been afraid of flying?

[...] And two: How To Write An Affirmation That Works where I tell why sometime affirmations don’t work and how you can tweak something small and shift everything. I have also written how I used affirmations to cure my fear of flying. [...]

[...] myself and take action toward my goals. I can trust myself, I can take action to get rid of you. I can fly in a plane, I can present a workshop, I can go to the concert. I can do anything I want to [...]

Kelly,
Let me know if it works!

Every time I get on a plane, I have that fear. It's not overwhelming, but it's there. I'll have to try this, Jodi. Thank you.

I was reading and before reaching the end and reading what you would do as a survivor for just few days, I directly figured myself calming others, and showing them the "beauty" of having the chance to still have few days before dying, few days where they can make peace with who they are, with the people around, with the whole universe but mainly with God, because we know that some people's reaction would automatically "accuse" God and ask him why me? As for those who died instantly, they can be grateful not to have suffered from physical pain. I don't like to think of death as something bad. I never do. I am too upset now that my friend is dying, but i am so happy for her. I am upset because I will miss her, so it's in me, nothing to do with her.
I am not really scared of flying, but I am "over stressed" in a plane. It's not fear of death or plane crash or terrorist act. It's the change. Its an amplified anxiety of what I feel anytime I move room my comfort zone, nothing more.
I loved this article. I also loved the comparison you made wit the abuse. The fact that waiting is sometimes worse than the pain itself. It is SO true!

I am glad it touched you so much! We are two peas in a pod! This is kind of like how you were during the war, with your sibling, distracting them, etc. Like Anna Frank!
Love,
Jodi

exactly! you remember!!
I used to calm them down, and lay down on top of them to protect them with my body! I was just 7 when it started.
I didn't read Ann Frank although I have it at home somewhere. I must find it and read it. For some reason my classmates read it, but I wasn't allowed to. I wonder why? Maybe when I read I will understand.
I have no idea what it is about. I know its the diary of a girl and its too emotional.