Can We Really Predict Suicide Risk with a Blood Test?

About a month ago the news was awash with headlines like: This Blood Test Can Predict Suicide Risk, Scientists Say (thank you, Time.com) suggesting that, well, there was now a blood test to find out if you’re at risk for suicide.

When I heard this I thought it was so outrageous that I dismissed it out of hand. But the major news organizations reported headlines like this and people, amazingly, bought into it.

As I said, there is a kernel of truth here, and when I looked into it, I did find it interesting. Essentially, scientists have found a gene expression (SKA2) that is significantly lower in those with suicide risk. This genetic variation may be responsible for cortisol (the hormone you release when you’re stressed) modulation, meaning that people with suicide risk have significantly more cortisol floating around. (This, by the way, makes sense as we know that a huge risk for suicide is massive anxiety and/or panic attacks.)

So, if you take a person’s blood, you can find this genetic expression and extrapolate their risk.

You know, sort of.

Here’s the thing, no, single thing can ever predict behavior because behavior is extremely complicated. The reason why behaviors manifest is a combination of physiology, psychology and the environment and this gene only covers one of that trio. This basic fact should automatically put make the assertion of genetic suicide prediction suspect.

The results of the study state that:

SKA2 significantly interacted with anxiety and stress to explain about 80% of suicidal behavior and progression from suicidal ideation to suicide attempt.

Can We Predict Suicidal Thoughts and Actions?

80% is not bad, not bad at all, but then, I’m not a statistician and the statistics reported in the actual paper do not look nearly so promising, according to professor of translational epidemiology, Cecile Janssens, in her Huffington Post article:

The scientific article reports that the SKA2 gene increases the risk of suicide by 1.15-fold.

So if the risk of suicide were 1% (which obviously it isn’t), the increased risk as predicted by this gene would be 1.15%. This increase in risk was replicated in two populations: one of only 30 women, and one of only 22 children. These are not statistically significant numbers – by a long shot. 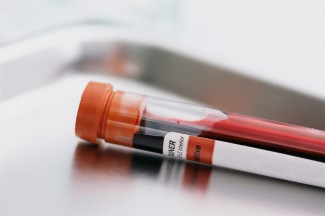 Anyone else see a problem with that?

As Janssens mentions in her article, the genes used to predict breast cancer actually foretell of a more than 400% increase in risk, and that is why that test works – because while it certainly can’t predict cancer 100% of the time, it absolutely can predict a significant change in risk. This new gene variant cannot do that for suicide.

Conflicts of Interest in the Suicide Blood Test

And if you read the small print you’ll see that two of the senior authors are co-inventors on a patent to “evaluate risk of suicidal behavior using genetic and epigenetic variation at the SKA2 locus.” I’m not saying the science isn’t accurate here, I’m just saying that the scientists have a vested interest in media spin.

Can We Use Genetics to Predict Suicide?

In my opinion, as a layperson, I say, no, we are nowhere near this. The above suicide blood test is, in my opinion, something that lays the foundations for a money grab.

We saw this a few years ago with a blood test for schizophrenia. A company had a proprietary blood test that would “predict the likelihood of schizophrenia” in an individual. Well, I debunked their claim after pouring through their “science” that had holes large enough to drive a truck through. Sure enough, last I heard, this company no longer offers this test. I hope it was because someone sued them into the Stone Age.

Because while I’m a big believer in science, I’m also well aware that people will do anything to make a few dollars – even off the backs of people with mental illnesses. And just imagine if you could take your 12-year-old daughter for a blood test that really would show whether she was at high risk of suicide. Is there really any amount of money that many parents wouldn’t pay?

So, by all means, do use all the science at your disposal when looking at serious issues like mental illness and suicide but make sure you understand the science behind it first.

[P.S. People are rarely interested enough in the science to read scientific papers – I get that. But laypeople can get the same final take from people like doctors and like the above epidemiologist. Those people really will pour through the data. They’re nutty like that.]

1. thank you for sifting through the data.
2. you are smarter than I am (don't say that often)

When I read about this study and this test, I thought, "Good luck on that one." There are such a myriad of factors that play into a person's mental/emotional state; depression, anxiety,physical health issues, social background and yes, genetics, traumatic experiences or experience, shall I go on? If scientists can design one blood test that can take ALL of those variables into account and determine a person's chance of attempting or committing suicide..that's got to be the ALL time greatest blood test in the history of the world!