So, here's what was popular in the world of Breaking Bipolar in 2015.

#5 -- The Depression After a Hypomania: People characterize bipolar as consisting of elevated moods and depressed moods, okay, but few people acknowledge that what goes up, must come down and there is typically a pattern to these elevated and depressed moods. In my experience this equals a severe depression after a hypomania (or, likely, mania as well). 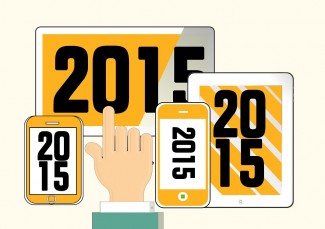 #4 -- I Can't Make a Decision, Everything Feels Wrong: While many people with depression suffer from difficulty in decision-making, this seems to be something people rarely talk about. Here I talk about what it feels like when you're frozen and can't make a decision because every choice feels wrong.

#3 -- Reasons for Suicide: When Your Brain Lies to You: I've said time and time again: the bipolar brain lies to you. It is convincing, sure, but it still tells absolute lies and sometimes these lies can make you believe that suicide is the only option left. This article talks about these lies and what we can do to fight the lies of the bipolar brain.

#2 -- Bipolar and Being Denied the Disability Tax Credit: In Canada, we have a special tax credit for those who are disabled and I, in spite of having a crippling disability called bipolar disorder, have been denied this tax credit. In this article, I talk about how it feels to be denied something that feels rightfully, and painfully, yours and how wrong this particular denial is. (Not to mention how unfair it is to make it so difficult to those with a mental disability as opposed to another type.)

#1 -- What It's Really Like to Stay in a Mental Hospital: Far and away, this Breaking Bipolar article is the most popular of 2015. It's probably because of the misconceptions around staying in a mental hospital and the varied experiences of psychiatric hospital stays as well. In my experience, mental hospital stays are not like in the movies and they can be a great turning point for you, or, possibly, not. (You might also want to read What I Learned about Psych Hospital Stays.)

I like to think that I have represented what's really on the minds of people with bipolar disorder, to some degree, this year, but did I miss something? Is there something you would really like to see discussed? Is there something that you felt passionate about that didn't make the top five? Do let me know in the comments below.

When Your Loved Ones Don’t Believe in Mental Illness
#BellLetsTalk – Help Raise Funds for Mental Health Jan. 27th
Renita
January, 11 2016 at 8:12 am

Sarah
I think you're missing the point I'm trying to make. It's equally important as suicide but not politically acceptable to talk about so it gets swept under the rug
I'm well aware that up to 50 percent of people with bipolar will attempt suicide and some will succeed. I agree it's not to be taken lightly. So medication DEFINATELY has it's place. My mother died by suicide. I have bipolar 1 and I DO take medication but I am very concerned about the side effects
My point is that suicide is not the only way that someone with bipolar can die
Sometimes the treatment can be just as deadly as the disease in the long run.
A small example of the deadly side effects is Rebecca Days comments about Accepting Weight Gain on another thread. I'm sure you will agree that weighing 340 pounds puts a person at greater risk for a premature death

I would normally like to discuss these side effects, and other areas of treatment like the hierachical nature of some hospitals, which can lead to people being traumatized in treatment, suffering greatly and then naturally avoiding treatment.
However I end up in a battle with someone on the internet who thinks a reasonable contribution to the discussion is to call me a drug addict. Who will not listen. Very frustrating.
The bipolar suicide rate is very real and I think the families of these people would not say it is 'sensationalised'. However neither would the families of people suffering from losing a loved one in treatment, want this information suppressed.
I will not be engaging further this discussion, since this topic usually results in ad hominem I need to erect a boundary, but I will be thinking further on the topic of side effects.

I'd like to hear more about the overall mortality rate directly attributable to the taking of bipolar medication, not just the sensationalization of suicide due to the bipolar disorder itself.
While I understand the need for medication in many cases I am getting sick and tired of constantly hearing about the numerous side effects being swept under the rug like they either don't exist or are less important. Because they DO exist and they ARE very important to many of us.
There are always two sides to every story. We need to stop tip toeing around the issue like there's an elephant in the room.
Antipsychotic related obesity, causes heart attacks, strokes, diabetes, neuroleptic malignant syndrome, etc. What about lithium related toxicity, kidney and thyroid problems. What about the ever popular lamictal and the deadly Stevens Johnson Syndrome. What about the increased rate of cancer among bipolar patients. What about the risks of driving while under the influence of some of these medications, for instance Seroquel. What about birth defects, miscarriages, etc
These are powerful drugs people that can either give you back your life or take it away prematurely. Not to be taken lightly
Here's one article I found particularly disturbing

Hi Lisa,
Try Googling NAMI or the DBSA for a support group in your area.
- Natasha Tracy