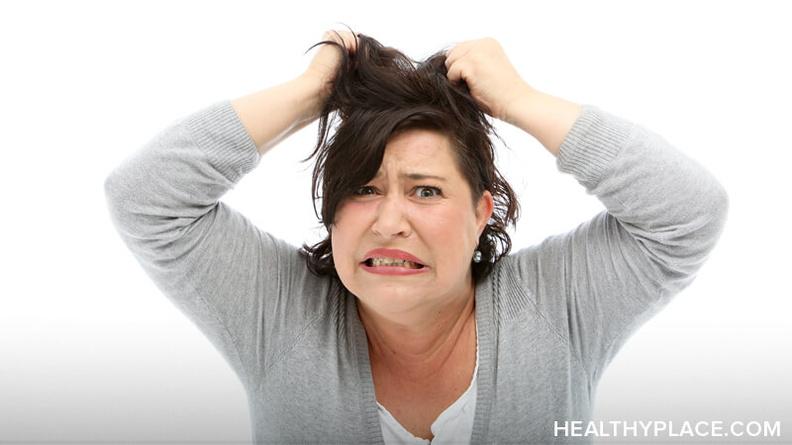 Angry, frustrated, irritated and anxious – did I ever mention that bipolar mania, hypomania and depression are not the only mood/emotional states of my bipolar disorder? While most of these aren’t, technically, symptoms of bipolar disorder, they are common expressions of, or occur with, bipolar disorder. So, sometimes, instead of being “simply” depressed or hypomanic, I also feel dramatically anxious, frustrated, angry or irritated.

How Common Are Anger, Frustration, Irritation and Anxiety in Bipolar Disorder?

Irritation – or, rather, irritability – is actually a symptom of bipolar mania/hypomania. So if one is experiencing mania, hypomania or a bipolar mixed state, irritability is actually very common. And, of course, if the world is irritating you frustration would seem to be a natural offshoot as well.

Additionally, while I’ve described before that anger is not a diagnostic symptom of bipolar disorder, it does seem to be a common expression of the illness. Even when bipolar disorder is in remission, anger levels in those with bipolar disorder are elevated. For me, it just feels like the world is grating on me like sandpaper on raw nerves so I feel like getting angry – at everything.

While these emotional states suck – like, really suck – they are possible to deal with.

Therapy, such as cognitive behavioral therapy (CBT), can teach you how to better deal with dramatic emotional states whether they are outside of depression mania/hypomania or not. Learning to spot the emotion and deal with it in a healthy way before it spills over into the outside world is critical. While I feel, right now, like strangling a person you’ll notice that I’m not up on assault charges because while I feel these things deeply, I don’t let them alter my behavior is extreme ways.

Therapy can also help you deal with other things in your life that may be worsening your anxiety, frustration, irritation or anxiety. We all have stressors and sometimes therapy is the best place to explore those and to find new ways of coping with them.

And while it sounds simplistic, deep breathing is something that I find critical when experiencing these types of strong emotions. Really. I feel this immense frustration with everything and everything in me tightens. To fight back, I very purposefully take deep, slow breaths and the oxygen does release the stress slightly. This is a biological reaction that you can use to your advantage. Sure, I have to do it over and over again every few minutes, but it still works.

Additionally, it’s always a good idea to talk to your doctor about these types of emotional states as they could be helped with a medication change or they could even be a medication side effect (some of my anger I attribute to one of my medications but the benefits outweigh that side effect).

You Are Not Your Frustration, Anxiety, Irritability and Anger

People always say, “You are not your illness.” This is true. It is also true that your frustration, anxiety, irritability and anger are also not you and likely bipolar-related. If this is the case, then, it’s important to treat these things like what they are – symptoms of a medical illness. They are not character flaws nor are they personality traits. They are traits brought on by a miswired brain.

This doesn’t mean you don’t have to take responsibility for them or your actions related to them – actually just the opposite; a proactive stance is critical – but it means that these emotional states can be helped and you can start to deal with them better and let them affect you less.

Distraction as a Bipolar Coping Skill
Maintaining Boundaries with Bipolar Over the Holidays
Ali
April, 11 2018 at 5:00 pm

I have a boyfriend with bipolar and we used to drink together and relationship became volatile. We stopped drinking but he gets bouts of anger and frustrations. Both of us are trying to sober up from alcohol but I feel demeaned and broken. How can I cope

Hi Sonia,
I'm sorry to hear you are experiencing these problems. While you and your boyfriend are getting sober, things might be a bit rocky -- but they may even out once some time passes.
I recommend open communication and telling your boyfriend how you feel. If you truly feel you can't get over it but want to stay together, couples therapy might be the best idea.
Good luck.
- Natasha

Thank you for such a clear summary of bipolar symptoms. This has helped my sanity levels. Keep up the great communication ;)

You can take more than you know. Life is what it is. I am learning to accept whatever happens will happen for a purpose. Depression and anxiety still hits me pretty hard, but their effects are not as long lasting as they use to be. Yes I feel lonely, but I have taken the effort to socialize with someone. That helps. Exercise helps. And just letting go helps. PS. I am leaving for 6 days on a business trip. I won't take any technology with me this time other than my flip phone. I need the escape. Keep going...you are stronger than you know.

Oh these emotional states.frustration.anxiety.hopelessness.anger.they are taking a lot of energy and im trying to switch from negative to positive thoughts,im trying to survive.maybe thats the problem.im not living,because i dont really want to and im costantly trying to challenge that thought.i dont know how much more i can take.