The Effects of Lack of Sleep on Bipolar Disorder 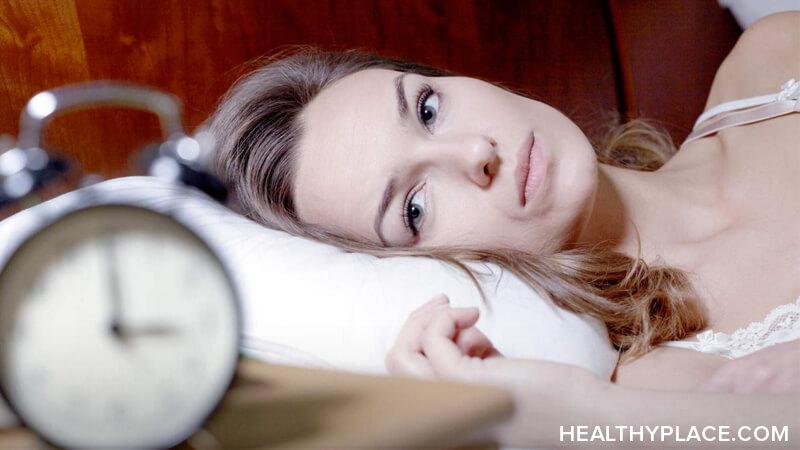 There are nasty effects on bipolar when I suffer from a lack of sleep. Luckily for me, I usually do have a decent sleep thanks to my medications but, sometimes, my body just decides to wake up at 3:00 a.m. and refuses to go back to sleep. I know this happens to many people but I also know that most people don’t have bipolar disorder. And I know that, for me, if I have a lack of sleep it really affects my bipolar disorder negatively.

I have talked about sleep and bipolar disorder before (What's the Deal with Sleep and Bipolar Disorder?). Getting a good night’s sleep is critical to achieving or maintaining mental health wellness. And if I’m not sleeping well over a longer period of time, it’s usually indicative of a mood episode like a hypomania or mixed mood. I know to watch my sleep carefully.

Effects of Lack of Sleep in Bipolar Disorder

I don’t know how people without bipolar disorder deal with a bad night’s sleep. My guess is they’re just really tired and foggy the next day but with an extra cup of coffee, they function mostly as normal. Being tired because you woke up in the middle of the night and didn’t get enough sleep sucks, but it’s nothing compared to how I feel after a bad night’s sleep.

For me, if I wake up, even two hours too early, I’m toast the next day. The effects of bipolar disorder due to lack of sleep include:

And I can definitely say an extra cup of coffee doesn’t help. I can drink a gallon of coffee and it does absolutely nothing for me.

Dealing with the Effects of Lack of Sleep on Bipolar Disorder

Unfortunately, the only way I know to deal with lack of sleep and bipolar disorder is to, you guessed it, sleep. And, unfortunately, that doesn’t seem to fix the situation immediately, but I know the next day, assuming I get a good night’s rest, I should be okay.

Because the tough thing about lack of sleep and bipolar disorder is lack of sleep tends to breed lack of sleep because it alters mood. So because lack of sleep can build on itself, doing what I can to try to deal with it as soon as possible is paramount for me.

So what I find is that any night where I don’t get enough sleep leads to a lost day, which is incredibly frustrating. That said, I try to stop it from becoming a lost week or worse. That self-care is really important.

APA Reference
Tracy, N. (2017, August 22). The Effects of Lack of Sleep on Bipolar Disorder, HealthyPlace. Retrieved on 2021, August 5 from https://www.healthyplace.com/blogs/breakingbipolar/2017/08/the-effects-of-lack-of-sleep-on-bipolar-disorder

Others Have It Worse Than You and Bipolar Doesn’t Care
Handling Criticism About Your Bipolar Disorder Treatment
Connie Graf
December, 27 2017 at 6:21 am

I woke up on Christmas Eve at 3:15 A.M. and could not go back to sleep, this caused non-functionality all day, I still keep waking up in the middle of the night, I am going to ask for a higher dose of my sleep meds, maybe for once I'll sleep through the night.

I totally can relate. My mother leaves television on all night, which breaks my sleep and I'm aggravated the while day. Meds help but wear off Hopefully, I can master this sleep problem until I take further action.

Lack of sleep is becoming a problem for the younger generation where they are hooked to their smartphone and internet. My point is lack of sleep is prevalent.
Thank you for sharing your experience. I've not given much thought on the effects of lack of sleep on my condition. Usually I observe is an unproductive day should I sleep too little. And likewise, sleep is the only cure for sleep inadequacy. As for the lost day, I try to do some light activities that requires lesser cognitive skills . I like your approach about not letting one lost day turning into losing a week of productivity.

This is an excellent and relevant topic. For me having BP 1 for 25 years, waking up early is my "warning sign" that I am hypomanic and need to add PRN medicines that my Dr. and I have agreed upon. Unfortunately, these mild episodes last weeks and weeks for me, even while trying to do the right things. My Dr. says I manage well....(my job is not non-stress and "non-professional" anymore. I work part time, volunteer and have more flexibility to take naps, etc. However, I would welcome any suggestions for how to avoid or shorten these periods of hypomania that I get at least twice a year.

I hear ya. Since May I've been super busy at work. My stats have literally doubled. When they closed down another office we inherited their workload. I am totally wiped out by the end of the day. Wired but tired. Also worried about finances and the possibility of more downsizing this Fall...
The hormonal changes I've also been going through, especially the sleep disturbances and hot flashes due in part to menopause, and this summer's heat wave have added to my problems. These days I feel like a pig roasting on a spit!!! It's so hard to get a good night's sleep with all this internal/external heat going on. I keep telling myself over and over again that this is only temporary.
Unfortunately what's not temporary though is my bipolar. These sleep disturbances have taken their toll on it as well...
In an effort to get back on track again before the Fall/Winter months when my circadian rhythm changes again and plunges me even deeper into a hole I asked for some holiday time off, 4 weeks to be exact, and surprisingly I got it. It was either that or get my doctor to sign me off on sick leave.
So this is my first week off and so far I haven't accomplished much of anything, yet I am still hopeful. I know it's gonna take some time to implement the necessary changes. But for now I need to be gentle with myself and give my body time to rest