Permission for the Day Off Work Because of Bipolar 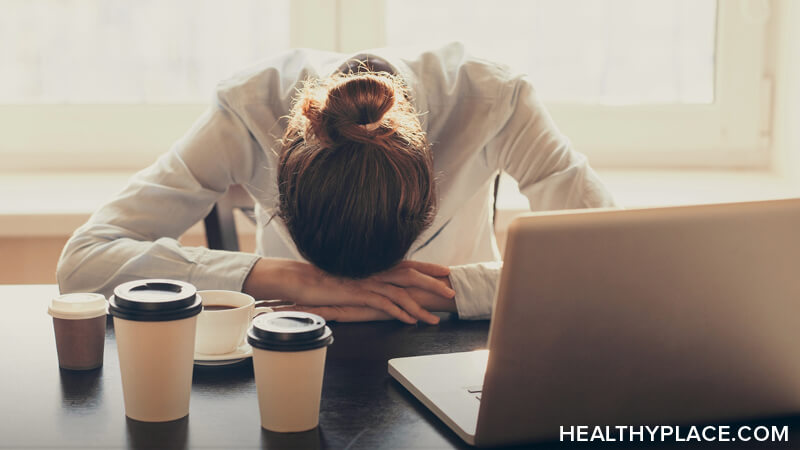 Why Do You Need a Day Off Work Because of Bipolar?

People vary, but I experience severe bipolar symptoms at random intervals. Bipolar disorder is supposed to be episodic in long intervals (untreated, this might be months) but it isn't for me. I cycle very quickly and my bipolar symptoms can change a lot from day to day.

Today, I'm suffering from four nights of insomnia. This is a very big deal for me. My brain doesn't do well with lack of sleep. When I have a lack of sleep or even interrupted sleep, my brain fails to work. I get foggy and scrambled and zonked and dizzy. The bipolar effects worsen and so do the medication side effects. I become shaky and weepy and headache-y and basically nonfunctional. And, not surprisingly, "nonfunctional" means I'm pretty useless at work, too. Basically, my brain hurts.

Why Not Take the Day Off Work Because of Bipolar?

It's very hard to allow taking the day off of work for a disorder that some people believe doesn't even exist. I would have a hard time taking time off for any illness, but it's particularly hard for a brain illness because of its invisibility. There is no coughing. There is no sneezing. There is no risk of communicability. So, surely there is no reason not to go to work.

But this is false, of course. Sick is sick no matter if you're sick with bipolar disorder or sick with the flu.

Getting Permission to Take the Day Off Work Because of Bipolar

I am my own boss but in my experience, I'm a bit of a difficult one at times. I'm a serious taskmaster. It's how I can be a contractor and make a living. And asking me for permission to take a day off work because of bipolar disorder is pretty daunting, actually. Although I can, theoretically, take the day off work anytime I want, and even though my clients are very understanding, it's hard for me to give myself permission to do it.

But I have to get better with this. I have to understand that sometimes bipolar disorder -- like any illness -- requires time off work. I have to believe this isn't a failure or frailty on my part but rather a symptom of my own humanity. Humans are delicate creatures and they require extra attention sometimes, to say nothing of the complexity and delicacy of the human brain.

In short, I need to learn to give myself permission to take time off work because of bipolar disorder; because, I've learned if I don't, things will just get worse. "Powering through" hurts me and my overall productivity. And that functional productivity is what I was worried about in the first place.

Tags: day off because of bipolar bipolar and taking a day off

APA Reference
Tracy, N. (2018, January 1). Permission for the Day Off Work Because of Bipolar, HealthyPlace. Retrieved on 2022, May 25 from https://www.healthyplace.com/blogs/breakingbipolar/2018/01/permission-for-the-day-off-work-because-of-bipolar

I Can’t Do It – Bipolar’s Invisible Barrier
Bipolar Disorder and Inner Restlessness -- What Is It; How to Cope
bipolarsurvivor
January, 19 2018 at 4:43 pm

You need to stop "advocating" for an illness you do not have. [moderated] and I'd be more sympathetic if I didn't suffer from actual Manic Depression. You do not. You are misrepresenting an illness you do not have and promoting misinformation that leads to misunderstanding, misdiagnosis and many harmed by very toxic drugs. Educate yourself, deal with you personal trauma, learn ways to heal and [moderated] Happy New Year to you.

Taking days off for any reason is a problem for people without professional jobs. 5 of my 6 kids work, but at minimum to near minimum wage jobs. They tell me that unless they can physically demonstrate the illness with a fever, vomiting, or diarrhea, they're assumed to be faking it. A mental health day would be aking to quitting, I suspect. I know they never risk it. Sad.

Well what ever happened to the idea of needing a "mental health day?" Oh wait, it was "off shored!"