Anger in Depression is a Secondary Emotion

This is not to say that anger is not real or normal. It is. And often justified. But anger comes second after a primary emotion comes first. Sometimes that primary emotion isn’t even recognized or realized because it is below the surface.

Imagine a tree, with its trunk and branches tall and large above the ground, and the roots under the Earth. What do those roots do for the tree? They feed it, right? So imagine the trunk and branches are the anger on your outside, the part that people see. But below the surface is the root of the anger, fueling it. If a student was walking down the hall at school and someone tripped him, he might jump up in anger ready to fight, angry. But right before that, he might have felt embarrassment. If a teenager is late for curfew and her parents have been pacing the house, when she walks in late they might argue and be mad and punish her. But right before that, they were worried. There can be any number of emotions below that surface that trigger anger, and depression is one of them. 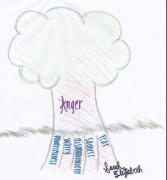 Irritability, short fuse, crankiness, feisty…rage, violence, fighting…outbursts of anger, though they may cause conflict in relationships, have been more socially tolerated in men than expression of sadness or depression. Trying to get help for an “anger problem” might not work unless the source is discovered and addressed. Some men will recognize they have a problem with anger and try to stop it, but if they don’t find a healthy outlet for the unresolved issues, they may acquire a new dysfunctional habit. Half of anger management is knowing triggers and working on self-regulation. But the other half is finding the source and addressing it effectively.

Some people who have bipolar disorder do have anger or rage during mania. And often, people come to counseling because they are angry or moody and assume they have bipolar disorder. But just as discussed above, the anger can also indicate other issues going on. It can be depression, anxiety, feelings of powerlessness, or a very common trigger, disappointment.

Children do not always know what is bothering them or why, but their discomfort may show in their acting out behavior. So anger in children may indicate abuse, ADHD, anxiety or even sleep disturbance or blood sugar problems. Anger is real, anger is normal. But anger alone may not be the problem. Digging a little deeper below the surface may show the true indicator of how to address it.

APA Reference
Merz, A. (2012, June 12). Anger in Depression is a Secondary Emotion, HealthyPlace. Retrieved on 2022, December 9 from https://www.healthyplace.com/blogs/copingwithdepression/2012/06/anger-is-a-secondary-emotion

How to Help a Depressed Friend: A Poem of Support to Share
Retirement is Depressing
Dr Musli Ferati
July, 5 2012 at 10:31 am

The presentation of anger as external appearance of body reaction to any emotional disturbances exhibits a genuine and original explanation of this irascibility conduct. Moreover, in real life experiences, we have to constrain with many undesirable events and situation as well, that provokes different unpleasant feeling that virtually might to display with an extenden spectrum of emotional expression. Even You confirm the veracity that underline emotions predict our emotional communication, there are a lot of argument that our cognitive background moderates definitive reaction that might be as anger or as enjoyment. Therefore it ought to create a positive and an optimistic out-look on the world in order to strengthen our mental health opposite many life impediments.