The Catalyst to My First Bout of Depression

The catalyst to my first bout of depression was almost thirteen years ago. That's when the official depression diagnosis was, anyway. That's not to say that I wasn't depressed before that. If I was, I didn't know I was. But that date marked the beginning of my journey to getting treatment for my depression.

It was January 2001. I was living my life as a wife and mother of three children, ages 14, 12 and 7. I had a full-time job that was very stressful, though no more stressful than it had been for years. I was in information technology support, carried a pager and was on-call 24x7. That meant that I was paged in the middle of the night, sometimes night-after-night, expected to analyze problems, solve problems, save the day.

I guess you could say I was a robot, or, at least that's how I described myself. Life became a series of movements, robotic movements. I just thought that's what wifehood and motherhood and working was all about. Millions of people do it every day. I was no different. Nothing special. 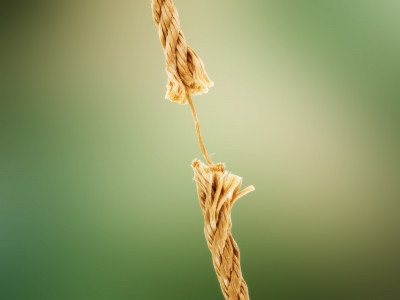 I didn't realize that, day after day, this pace at which I lived my life, along with what I came by naturally through heredity, I was like a rope unraveling, just barely holding on.

And then the rope snapped.

During CBT (Cognitive Behavioral Therapy), when asked if there was a catalyst, some event that caused the wreckage, oddly enough it seemed as though there was not. The only thing even remotely out of the ordinary was a minor fender-bender I was in on December 23rd, 2000. I was stopped at a traffic light and got bumped from behind. When I got out of the car to speak to the other driver, he sped away. I was shocked, dumbfounded, naive. I cried. That was it. I went on.

Christmas came and went, as did the new year. The holidays were over. I went back to work. A couple of weeks later, I fell into depression.

Pushed to the Limit and Over the Edge

My therapist said that anything, even something as seemingly innocuous as what I experienced, can be all it takes.

That day, when bumped by a stranger's car and abandoned, was actually a blessing. Though it was the catalyst to my first bout of depression, it also brought me to the treatment for my depression that I so desperately needed.

You can also find Liana Scott on Google+ and Twitter.

APA Reference
Scott, L. (2013, December 1). The Catalyst to My First Bout of Depression, HealthyPlace. Retrieved on 2022, August 8 from https://www.healthyplace.com/blogs/copingwithdepression/2013/12/the-catalyst-to-my-first-bout-of-depression