Make Your Own Luck to Defeat Depression-Related Anxiety

My depression goes hand-in-hand with anxiety, which leaves me feeling paralyzed with fear. For years I hid from life, until I started using my feelings of anxiety and the hopelessness of depression to convince me that I had nothing else to lose. I learned to make my own luck to defeat depression-related anxiety.

A year ago, I stood on a high school auditorium stage and announced that when I was in high school, I was too scared to go into the cafeteria because of all the students that would be staring at me. After speaking that sentence on stage, realized that I was standing in front of twice as many students as before, even though I felt a lot of anxiety still. What had changed?

Challenge Your Depression-Related Anxiety by Pushing Your Thoughts

The only difference between how I felt on stage compared to how I felt in my high school cafeteria was that, the second time around, I’d been ready for my depression-related anxiety. I knew I had nothing to lose.

I looked my anxiety in the face and said, “so what?” So everyone hates me? Fine, let everyone hate me. Sure, someone could boo me at my next presentation, they could yell to get off the stage and throw tomatoes at me.

Then I asked myself, "Have I ever seen anyone actually throw a tomato at someone else outside of cartoons?"

No. I’ve actually never heard anyone yell, “Boo!” at someone unless it was a joke. With those two thoughts I stand up to my anxiety and knock it down a few steps.

My depression-related anxiety is still there and will still keep yelling at me: "Someone could punch you in the face!" Then I tell my anxiety, "Yeah or I could be handed an Academy Award for my performance!” I remember that absolutely anything is possible, including the possibility of people liking what I say.

You know in the movie The Dark Knight Harvey Dent has his coin that he flips in the air? He constantly uses it to make decisions, but he has a secret that is later revealed: it’s actually a trick coin. It has two heads instead of one head and one tail, so each time he wants things to turn out in his favour, he calls heads. His trademark line is that “You make your own luck.” 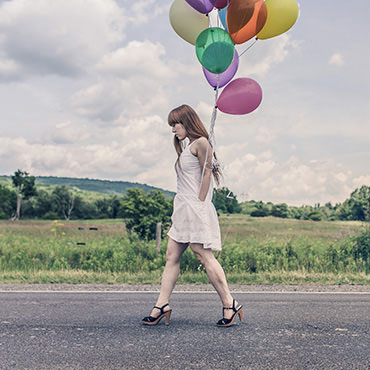 Later, Harvey Dent drops his motto and his character changes, but that coin thing really worked for him when he kept it up. I, too, believe that we make our own luck. It doesn’t magically erase the bad luck but we have to believe in the very real possibility that things will turn out in our favour.

How do you make your own luck? Consider what thoughts you have around something you do well. Maybe you know that you’re good at playing hockey, so you feel confident in shooting the puck. You don’t know if you will score each time you shoot, but that small amount of confidence you have makes it easier to take the shot.

Where else could you apply confidence, if only to tell yourself that there’s a 50% chance of doing well instead of badly? Things have to turn out well some of the time or else the whole world would be extinguished. If you place bets on yourself instead of against yourself, you just might come out with a big win.

You'll never know until you try. Try making your own luck to beat your depression-related anxiety.

You can also find Erin Schulthies on Twitter, Google+, Facebook and her blog, Daisies and Bruises: The Art of Living with Depression.

Surviving Winter and Depression
The News Can Trigger Depression
Pocket
March, 18 2015 at 6:22 pm

I visited your page and was really appreciated the tips that you have shared on luck to defeat depression. I found this article can inspire to every person. Depression takes an individual away from his aim, so it is needed to suppressed the depression whenever it mounts.PFF copes with mental depression with amazing videos.

Thanks for the encouragement. I suffer from depression and anxiety, paranoia, and fear as well. I drank beer every day for 30 years thinking my issues were alcohol withdrawal. Little did I know it was depression. I was sober for 5 months and started feeling better. Then I made the mistake of having a few beers again. I now know alcohol makes depression worse. Far worse. I will follow your advice and try to find good and luck today because you really have nothing else to lose.