The Science of Social Media Addiction

The Connection Between Social Media and Addiction 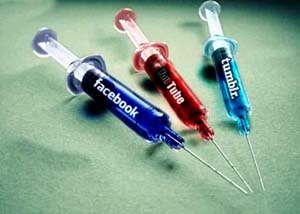 How does one become addicted to social media? If you’ve ever trained a dog, you’re familiar with negative and positive re-enforcement. For those of you that aren’t, here’s the basic break-down:

Social media tools use positive re-enforcement to drive traffic on their applications.

For instance, imagine you open an app and post a picture. If you’re one of the rare individuals who do not wait anxiously for comments, Likes, or shares – more power to you. You are not an addict. Individuals dealing with social media addiction obsessively check the app, waiting for the influx of “Likes” to create dopamine in their brain.

This little bit of dopamine actually creates cravings for the behavior which caused it.

The Science Behind Addiction

At face value, a little bit of dopamine may seem harmless. After all, dopamine and serotonin are naturally occurring brain chemicals that make us happy.

Dopamine-releasing activities (drugs, sex, alcohol, gambling, shopping, social media, etc.) do not provide long-lasting happiness and positive feelings. As a recovering alcoholic, I had to adopt new serotonin-releasing habits and then maintain them while fighting the cravings. In early sobriety, some addicts need antidepressants to manage their mental health while their body adjusts to new serotonin and dopamine levels.

About Becky Doyle, Author of the "Debunking Addiction" Blog
Coping with Smoking Cravings in Addiction Recovery
When to Get Rid of Social Media Relationships - HealthyPlace
March, 24 2017 at 9:56 am

[…] The Science of Social Media Addiction […]

[…] a hard time believing that someone could be addicted to their phone, you may find this article on The Science of Social Media Addiction very enlightening. Take a moment to genuinely consider your relationship with your phone, and […]

wonderful put up, very informative. I'm wondering
why the other experts of this sector do not realize
this. You must proceed your writing. I am sure, you've a great readers' base
already!