Or, “What Lance Armstrong Has to Do With My Eating Disorder Recovery.”

I was listening to NPR last weekend and they were, of course, talking about the Lance Armstrong interviews with Oprah, in which he admits to doping during the time which he won his seven Tour de France titles. (I wish I could find the link to this report, but after many hours of searching the NPR archives I couldn’t find it.) At one point during the segment, they quoted a psychologist whose point, in short, was that Lance Armstrong probably thought he was doing the best thing by lying about doping.

Many people, especially those with connections to the LiveStrong Foundation he founded, considered him a hero. He beat cancer and went on to win seven titles in one of the most prestigious sporting events in the world. 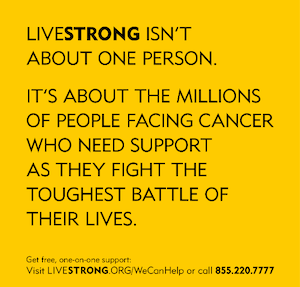 The psychologist said that because of that pressure to be an inspiration, Armstrong probably felt that keeping up the story was the most beneficial thing for everyone – especially those who looked to his story to keep going in their own battles.

Even before I took on this blog, I had people telling me how “inspirational” I am and occasionally the word “hero” is thrown out there by friends. And it’s true, I’ve come a long way since my first weeks at inpatient eating disorders treatment. But there is definitely a pressure to “keep up appearances” when people are looking to you as some sort of success story.

Recovery From An Eating Disorder

Not As Easy As I'm Making It Out To Be

When I began writing this blog, I agreed to be honest. Regrettably, I cannot say I’ve held entirely to that promise. While I haven’t lied, I have written articles that might make some believe that I’m further along in the recovery process than I actually am. After all, aren’t I writing with great confidence about the virtues of eating disorder recovery and how to stay in recovery against all odds?

Truth be told, I’ve been struggling. I am once again in the unenviable position of having to gain weight. When my dietitian told me, let’s just say I didn’t take the news well. I have no desire to gain the weight I’ve lost since I returned from treatment in August. And, if we’re being honest, it’s a pretty significant amount of weight.

I write a public blog, so stating all that basically is holding me accountable to the world. As much as I hate to do it, it’s the next right thing for my recovery.

What’s the next right thing for your own recovery?

I'm always real fascinated by the stories I read in newspapers and magazines about people who've gone from being seriously obese (and we're talking about life-threatening stuff here) down to their ideal weight. I mean these people work hard, harder than I've probably ever had to work in my life, to sort out their weight issues and it can take them years. So how come we all can't do the same?

I used to be anorexic and now I'm struggling with binge eating. It's so frustrating. I'm at my highest weight EVER, easily x-y pounds overweight.. wishing I could flip the switch back to anorexia. Toying with the bulemic avenue, but afraid of the repercussions. Don't know how to get help. I know my ED is my go to coping mechanism and my husband has been traumatically I'll for the past 5 years. I think in the Prairie region of Canada the resources are sadly lacking. Glad to have found this blog at least.
Thank you and good luck to you.

MaryLynne,
I certainly know how it feels to wish you could "flip the switch" and go back to anorexia. I felt the same way when I struggled with binge eating - but really, it's just different versions of the same issue. I'm sorry to hear about your husband - it sounds like you have a lot going on that is taking your focus away from you and your health. I know health care in Canada is quite different than here, but if you get a hold of me, I'll try to help you find some other resources to get you through (even if they're just online!).
Hang in there!
Jess
facebook.com/dancelittlejean

Jess,
It's never easy, is it? I'm exactly eight years out of inpatient treatment, and I've been ED behavior-free for about the last four or five. Most of the cognitions have disappeared, too. But every once in awhile I have to fight one back.
We all travel our own roads back to wellness--living in varying degrees of darkness and light until finally we can flip the switch all the way on. No two journeys look alike, but I want you to know that there is a life after anorexia. It's a rich one. One in which your daily activities and relationships aren't plagued by the shadows of "shoulds" and "shouldn'ts" and "can'ts."
You can do this. You deserve the freedom recovery brings. Everyone does.

Maggie,
Thank you for posting this. I hope all my fellow recovery warriors will read this and know that there is a rich and full life for them after their eating disorders and that recovery IS possible.
On behalf of all of us, thanks for being an inspiration.
Jess

This is a good post. It's really helpful to me to read how it really is for someone in recovery. Specifically to hear how someone else is grappling with difficulties, relapse or set backs. I've read a lot of blogs where people have stopped their eating disorder behaviors and while that gives me hope, it doesn't help me understand how others deal with struggles. When someone acknowledges their weakness it helps me feel more kind to myself.
So I thank you for your honesty.
What's next for me in my recovery?.....having just made a shift into abstinence after more than 21 years of bulimia...I'd say to just keep doing what i'm doing because it's finally working. I'm working hard on recovery, so I have to also be gentle with myself as I'm now facing a lot of difficult emotions that I've buried for a long long time. Thanks for your writing.

I'm glad this post helped you, Gel! Having grace and being gentle with ourselves in recovery is so key. I'll keep being honest and hope you'll do the same with the people in your life. :)

Thanks so much for sharing! I have had an eating disorder recovery blog for awhile now, and have been working on my recovery book for about six years. It wasn't until this past year that I truly have considered myself fully recovered--and that is probably why it wasn't until now, six years later, that I am FINALLY getting ready to publish the book. It can take a lot of time to get there--but as long as you find your reasons to recover, you WILL get there.

Justine,
Thanks for your comment! I am so glad you did because I love hearing from people who ARE fully recovered -- so that I and my readers know that it can happen! So proud of all the hard work you've put in. I'd love to continue to hear from you and your perspective on these blogs as I'm sure you've got great insight!
Jess

I've always believed that recovery is way harder than living an eating disorder. ED has always been a sort of coping mechanism for me and it's much easier to hide in unhealthy behaviors than deal with my reality.
I think a public blog is a great way to recover. If I had to blog all my shit, I probably would think twice about doing it.

Sarah,
Thanks for your comment! I definitely agree that living with an ED is far more *comfortable* than the process of recovery. However, in the long run, the discomfort of those first months and years of recovery gives way to a far more fulfilling and enjoyable life. If starting a blog would be a good way for you to recovery, then start one! I, for one, would be a faithful reader and cheerleader.
Jess

Jess, just because of what you've been through and what you HAVE accomplished (regardless of setbacks and struggles you're having), I do think you're inspirational. Through relapse or recovery, you're still going to be someone I look up to. You're like my older sister, you know? I love you no matter what, and I don't want you to feel that pressure from me. Of course I love it when you're doing well, but I'm not going to hate you when you're struggling. You're a good person, Jess. I'm sorry if I've even said something wrong in this response. But I wish you good luck with pulling things together. I'm here to support you.

Mckenna -
Thank you so much for the sweet words. You've said nothing wrong, my dear. I feel as if you are a sister as well, which is why I want recovery so very badly for you.
xoxo
Jess

This article makes a lot of sense to me. People have often said that my blog is "inspirational" and it really makes me wonder. And over the last year as I have gained all of my weight back, i've battled feeling like a complete fraud. I gave up blogging for most of the summer, because I didn't like the idea of people looking to me for advice, when I clearly don't have my s*** together. I don't exactly what took me back to blogging, but I hope when I do talk about weight and my journey I can be honest and open.

Jill,
So glad this resonated with someone. It's true that it's difficult for us to see ourselves as "inspirational" when we don't have it all together, but are writing as if we do. I hope you (and I) can be honest with our blog readers. I think it's the ups and downs that are more inspirational than just continuing success. It's also a way for people to better support us in our struggles.
Jess

There IS something to say in not judging one's recovery on weight/numbers alone....
So remember that.

Missy, I agree that weight is not all there is to recovery. However, there IS something to be said with nutritional restoration being the first step to full recovery. Your brain just works better when you are eating regularly and sufficiently. And, for recovering anorexics, this often means gaining weight.
Thanks for your thoughts!
Jess