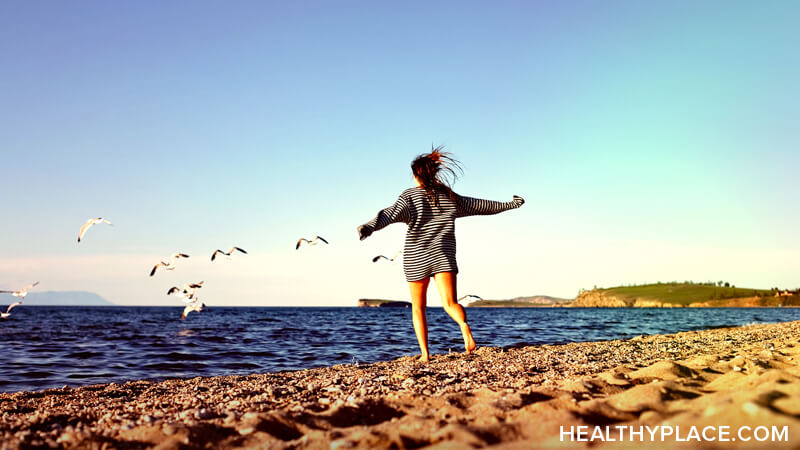 The unknown is what most frightens us. Alfred Hitchcock said, “There is no terror in the bang, only in the anticipation of it.”

Recovery is the big, scary, bang and, naturally, we do everything we can to protect ourselves from it.

What we don’t know can terrify us. Recovery, for all of us, is like jumping off a cliff with no guarantee that we’ll be held, caught, or safe, that we won’t go plunging down. What person in his or her right mind would say, “Yeah, jump off that cliff. That’s the best idea I’ve heard all day.”

No way. We have to, over time, build our courage so that we can eventually trust that there will be something else off the cliff, other than impending doom.

Lessen the Fear of Getting Fat

Being better, or being recovered, can come with many connotations. I used to think that recovery meant getting fat and being told to love your new, fat body. For many of us, recovery is terrifying because we truly, deeply believe that we’ll become obese.

I absolutely shared this fear. The truth is that, for most of us, it will mean having a little more weight on our bodies. I still remember being at the doctor’s office when I was asked if it would be okay for me to have five more pounds on my body. I remember my brain freaking out and thinking that five more pounds was UNACCEPTABLE (and yes, it was a screaming capital letter word in my brain).

Lessen the Fear of Your Homeostasis Weight

However, when the doctor asked me this, I wasn’t at my homeostasis weight -- which is what I call the normal weight your body’s at without effort. For me, that number was higher than when I was restricting constantly but lower than when I was throwing up multiple times a day. My homeostasis weight today is more than the five pounds the doctor asked me about.

The difference is that it wasn’t just thrown onto my frame in a week or two. As I recovered, I gained more muscle and a bit more fat, but I also healed my brain with therapy. In a sense, I fleshed out my body and my mind. I don’t blink twice today about the little bit of weight I was deathly terrified of years before.

Lessen the Fear of Change

Let’s say someone offered you an all-expense-paid trip to an exotic paradise. We’d be thinking sure, that sounds great, but what’s the catch? Our brains are not as trusting as we’d like to think they are. Change, even if it’s a positive change, can be uncomfortable and scary.

Humans struggle with change because we like some forms of structure. It takes time to expand our comfort zone around a new life change. If you’ve had your eating disorder for a while, maybe years or decades, it’s like saying goodbye to the one abusive relationship we’ve gotten close and intimate with. We’re familiar with it. It’s predictable. So even if it’s destructive we will usually choose it over healthier alternatives, at first.

The longer we engage in the benefits of accepting eating disorder recovery, the more the eating disorder will lose its grip, magic, and allure. Then we can step out of it and release it peacefully as something that no longer serves us.

Accepting Eating Disorder Recovery Starts Just As You Are

Change happens only when we first accept where we’re at. The more we think our eating disorder isn’t a problem, the longer we will remain trapped in it. The first step to change, as in Alcoholics Anonymous, is admitting that we have an eating disorder and that we need help to get better. We can’t do it alone and we don’t have to. There are wonderful therapists, books, and support groups. There’s an abundance of assistance and people who want to help us live our best lives without the eating disorder (Eating Disorder Help: Where to Get Help for Eating Disorders?).

The beautiful part about starting where you’re at is that when you face your darkness, it becomes less scary. One day you won’t have to look over your shoulder and fear that the disorder is around the corner waiting to pounce on you and pull you into its grasp again.

Change is a beautiful thing and it happens in the time it takes. It’s a process and that’s okay. Keep moving forward on your recovery journey. Remember, there are benefits to accepting your eating disorder recovery. You’ll get there as long as you keep going.