From a young age, promising athletes are instructed to show no fear, to be the toughest, fastest and most fearless competitors on the field. They are also told to never show weakness, whether it be physical or mental. And that fear of showing weakness, could be the culprit behind so many suicides and mental health issues in both professional and amateur sports.

“Succumbing to injury was like submitting to an opponent. If Seau was hurting during training camp, he would have doctors treat him in his dorm room or at his home to prevent teammates from seeing him in a state of weakness,’ (Jim Trotter, Sports Illustrated.) 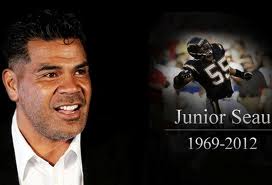 Junior Seau was a ten-time NFL All Pro linebacker who died of a self-inflicted gunshot to the abdomen. Much like any physical injury, Junior would never have dreamt of talking openly about his mental injuries, and now, he is gone.

And Sadly, His Story is Not Unique.

Just last year, NHL’ers Rick Rypien, Derek Boogaard, and Wade Belak all died by their own hands; Belak and Rypien of suicide and Boogaard from an overdose of alcohol and painkillers. As these three men were all ‘enforcers’ in the league, it begs hundreds of questions regarding both brain injuries as well as the inner-struggle of an athlete sought after solely for his physical prowess.

We may never know the exact reasons these men in professional sports chose to take their own lives, but one thing we do know is that they were not able to reach out, before it was too late.

It’s hard enough for a professional athlete to admit to themselves, let alone their teammates or fans that they have suffered from a dislocated shoulder, let alone a disconnected mind. Physical injuries can be seen. And for the most part, there is an effective treatment with an exact prognosis and assumed length of stay on the disabled list.

Mental illness is much less concrete. It is invisible, and society fears what it cannot see. A diagnosis of depression could mean an afternoon off the field, or a two-year hiatus. A diagnosis of drug-dependence may require a month long stay in a treatment centre, or the end of a promising career.

But with proper treatment, especially at the first onset of symptoms, the prognosis for many mental illnesses is actually quite promising. But if stigma prevents athletes from seeking treatment, the end result is unfortunately addiction, or even more tragically, suicide.

Athletes Are Not Exempt

But just because mental illness is complicated, it does not give us an excuse to shove it under the rug. One in four Americans will suffer from a mental illness at one point in their lives. Athletes are not immune to it and I would wager that with the stresses or professional sports, may actually be more prone to some forms of mental illness.

By pretending that athletes are somehow immune to mental health issues, or somehow 'tougher' than the rest of us, we aren't doing anyone any favours. In fact, we are risking lives by making it more difficult for athletes who legitimately want psychiatric help to come out of the mental health closet.

Cyber-Bullying and Suicide
The Other Side of Psychosis
JILL
October, 18 2013 at 8:58 pm

Does your site have a contact page? I'm having trouble locating it but, I'd like to shoot you an email. I've got some suggestions for your blog you might be interested in hearing. Either way, great website and I look forward to seeing it develop over time.

The real cost of Mental Health stigma is much more than we mediate at first look like. As you have mention, mental illnesses are invisible, but their consequences are of horrible if they remain intractable by appropriate psychiatric guideline scheme. Usually, people are enforced to refuse on properly time psychiatric treatment, in order to avoid many prejudice on mental illnesses and their long term treatment. The same is value for sportsmen, whose professional and social career is exposed to numerous dangers.On the other hand it is yet unbelievable that people are unconscious to importance of mental well-being and remain still unconscientious to fatal repercussions of maltreatment of any mental disorders. Indeed, unlike other non-psychiatric diseases, mental illnesses lead to disastrous damage of global wellness either for mentally ill person or its social milieu. These bad consequence along humane historic development has been of incalculable price: numerous civil and world wars with billions victims at any time and world wide, daily suicide victims, material and financial expenditures and so on. It is a global mistake against mental health and its frequent and different disorders, which one remains till nowadays incorrigible. Unforgivable fault!

I'm not so sure I agree that there is a great prognosis for serious mental illness, at least with the current mental health system. Some people do well, many do not. And, at the first sign of symptoms, the course of illness, and therefore treatment, really isn't clear. Many people with early symptoms of psychosis, for example, do not go on to develop schizophrenia, and trying to do early intervention only makes them worse. That said, I do think that there are useful interventions like supportive therapy and DBT that might be appropriate even very early on before it is clear how serious an illness is going to progress and if medication is necessary. And getting people off illegal drugs can "cure" many people of apparent mental illness.