Exploring the Link Between Creativity and Mental Illness

According to a recent study of 1.2 million people, the link between creativity and mental illness has been confirmed.

I have believed this to be the case since reading the eye-opening book by Dr. Kay Redfield Jameson ‘Touched with Fire: Manic Depressive Illness and the Artistic Temperament’ back in 1996 and am endlessly pleased that such a comprehensive study with a large sample size has found comparable results to her initial hypothesis. 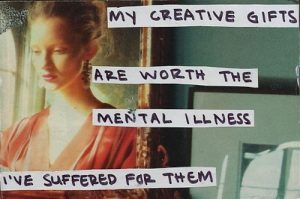 I came across this book in high school when a psychiatrist had managed to convince me that I suffered from bipolar disorder. This book gave me hope. It gave me hope that this daunting label that I had on my shoulders didn’t have to be all bad; that perhaps, there were even some benefits. That maybe, just maybe, my life wasn’t over.

The exciting thing about this study is that it could potentially change the way that mental illness is viewed, and treated. Simon Kyaga, one of the study’s authors, stated that ‘if one takes the view that certain phenomenon associated with the patient’s illness are beneficial, it opens the way for a new approach to treatment. In that case, the doctor and patient must come to an agreement on what is to be treated, and at what cost.’

He goes on say ‘in psychiatry and medicine generally there has been a tradition to see the disease in black-and-white terms and to endeavour to treat the patient by removing everything regarded as morbid.’

The Benefits of Mental Illness

As a survivor of mental illness and also as someone who considers himself to be quite creative, these words ring true in a very personal manner. For many years, I didn’t understand why the very ‘symptoms’ that were etched in my most intense creative bursts had to be drowned with medication.

I think this study should free us to think of mental illness in a whole new way. That essentially, it isn’t all bad and in fact, there could even be some great benefits.

Of course, any depression that results in social withdrawal, suicidal thoughts and distorted thinking needs to be immediately addressed. But what about the depression that allows an author to come up with the most twisted fiction of his career? Or the hypomania that allows for the creation of a symphony or the paranoia that is the root of an award-winning psychological thriller?

Cure the Madness, Kill the Creativity?

I wrote some of my best music when I was ‘mentally ill.’ I even released a five song EP alongside my memoir of songs that I wrote in the desperate lows of depression and during the flowery highs of psychosis. This isn't to say that I haven't written material that I am equally proud of in a totally mentally healthy state but these tunes capture something a little different.

When I was mis-diagnosed as having bipolar disorder (a topic for another column) I was placed on mood stabilizers that completely numbed every creative bone in my body. I couldn’t get in touch with those deep, often troubling emotions that fueled my art. I could barely feel any feelings, whether good or bad. It’s no wonder that I, alongside millions of people, decided to stop taking them.

We need to stop viewing mental illness in black and white terms. For some people, that very depression that we are trying to cure is the one thing that makes them feel real. And for others, those late-night writing streaks are all that connects them to the rest of the world.

There is a fine line between the sick and the well, and this study has just blurred the line even further.

What I at least will take from this study is that creativity and mental illness are inextricably intertwined.

And we cannot affect one, without affecting the other.

Your article isnt helpful to mentally ill people at all. Romancing creative talents and linking their works to mental illness has been written about for decades – well before the world started talking about mental illness.
The creativeness comes from being isolated and alone, stuck in your head for unhealthy periods of time.lost. This is also where the sadness is, and its also where the comfort is. Alone and sad, the creativity born from circumstance. Drugs neither help or hinder this process. Im ill, my mind is alone, im alone and I do creative things to dream and escape my thoughts. Mental illness destroys lifes - Its never worth it.

Hi Travis,
I just read over the blog you're talking about and I can definitely see where you're coming from. What I think that blog is trying to say is that something positive can come from mental illness, but it's a tricky situation to not then romanticize it. As you say, the creativeness can stem from being alone with our own thoughts and act as an escapist activity rather than facing what we're going through head on. It's a matter of recognizing when it goes back to being a negative again.
Thanks so much for your input.
-Laura

This is unfortuante misinformation from people who fear, have a taboo against and perpetuate stigma against having a mental illness. It is an unfounded truism that it romanticizes mental illness. A person of normal intelligence isn't going to think cutting themselves with a personality disorder, putting themselves at risk with bipolar disorder, lying in bed, comatose for days or weeks with depression, or going mad with paranoid schizophrenia is romantic. If someone thinks this, they are either not mentally ill, thinking they can think for those who are or they are mentally ill that have been convinced that people without mental illness think they are in a better position to know what makes people with mental illness tick.

I too am arriving to this page late, but I fully agree that there is a link between creativity & mental illness.
I have anxiety & depression. I like to write & make people laugh. I tend to write the best, funniest things when the dark depression cloud starts darkening my mind.
Thank you for writing this!

Dear Chris,
I'm coming to this page a couple of years late, but thank you for sharing your experience and these study results.
Did you ever publish a page on your misdiagnosis of bipolar disorder? I'm interested to learn how you determined that it was not what you had, and how you were able to get the cooperation of your doctors in reexamining the diagnosis. From my recent experiences, it seems that my medical professionals feel that believing you don't have bipolar disorder is a symptom of bipolar disorder.
Thanks so much! Hope you are doing well :)

I strongly believe there is a link between mental illness and creativity, I have always been a creative person and my imagination seems to have no limits and my thoughts are sometimes so vivid that they scare me. I have suffered from severe bouts of depression from the age of 13, I am now 30 and have probably had about 16 bouts. I also suffer from OCD and anxiety disorder and sometimes suffer with psycosis. Despite these debilitating and extremely scary episodes I have managed to get through university and now work as a designer. Luckily my colleagues and friends are extremely supportive and understand that I have periods when I can't work. ...maybe if I didn't have this illness I wouldn't have a job that I enjoyed so much?

interesting thoughts on the link between creativity and mental illness. I am a psych nurse of 20 years and have long believed that one of the things that has prevented me from experiencing severe mental illness, is my lack of creativity. I have never had what one could call, imagination. I struggle to visualize anything without an actual picture and any attempt at art is very concrete, never abstract. I truly believe that there is more to learn about the mentally "ill" brain. Thanks.

I've read Dr.Jameson's book as well, and found it quite interesting. It's great to see studies that point in the direction of a mental illness-creativity link. I can think up whole short stories when I'm in an early manic state, but when I write them down, they turn into gibberish. I had that happen on a exam too,I thought I did great. When I got it back I almost failed, the essays made no sense at all. My writing is much better when the bipolar is controlled, my thoughts are more organized. The meds don't seem to be dulling my creativity as I feared they would, and I'll take that.

I can see how this can be true for some people. I was a very good writer of stories and poems prior to my depression diagnosis. Now I can't write anything, its just gone :-(

Whatever you once had, you can have again! If you can get the depression managed, the writing can come back. I wasn't able to write for a long time as well but it eventually came back. Don't give up hope!

Good Article Chris! There was definitely a sweet spot on my way down to crazy town, I was filling a journal with drawings and writing in less than a month. When I really lost it, I filled a journal in about a week, but it was mostly gibberish.
When they pumped me full of drugs, I filled a journal in two months, then half a journal in three, and then eventually I could barely produce anything. Didn't feel much either.
I'm still working on the same journal now, ten months later.

Thanks for reading Tim. I hope you get that journal completed soon!