The Stigma of Self-Harm

The reasons that a person might harm themselves are as vast and complex as our individual genetic makeup. However, there seems to be one predominant goal associated with self-harm: release.

“I would resort to cutting myself for two reasons: the first being to release the tension, the build-up of emotions and thoughts that I just could not deal with. I wanted to scream but couldn’t,” said Julia P. who has battled and overcome self-harming behavior.

Self-harm manifests itself in a number of ways but can be defined as any behavior that causes ‘deliberate and often repetitive destruction or alteration of one’s own body tissue, without suicidal intent,’ says Armando R. Favazza, M.D., the author of Bodies Under Siege. 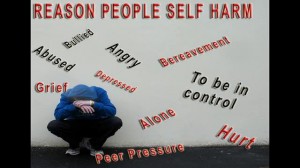 The most prevalent form of self-harm in Western culture is cutting, which involves taking any sharp implement such as a knife or a razor blade and cutting across the skin, usually drawing blood. (10 Ways People Self-Harm)

There has always been a certain stigma surrounding self-harm. It was once thought of as a cry for attention or as a failed suicide attempt. In fact, evidence points to the fact that most people who engage in self-harming behaviors are not trying to end their lives but are rather using it as a coping mechanism for unbearable emotional pain (Why People Self-Injure). And many go to great lengths to hide their self-harming behaviors, which dispels the myth that it is simply a plea for attention.

Self-harm can disguise itself as cuts around the arms, wrists, shoulders, stomach, inner thighs and ankles but can also include branding (burning the skin with a hot object), hair-pulling, self-strangulation, stabbing, carving words or symbols into the skin, head-banging, pinching, biting and even piercing and tattooing, when it is done to relieve emotional stress.

Self-harm does not have its own category in the Diagnostic and Statistical Manual of Mental Disorders but is rather mentioned as a symptom of other disorders, including depression, eating disorders such as bulimia nervosa and anorexia nervosa and personality disorders. It is also commonly found in patients suffering from severe anxiety.

'With Each Cut, I Would Feel Calmer'

“I would want to scream but couldn’t. It was like I wanted to blow up and scatter all over the place. I would desperately search for something to stop it. I just pulled a knife from the drawer and started cutting like a maniac, up and down my arms and upper thigh. I would usually choose a serrated knife. I liked to feel the ripping. With each cut I would feel calmer. It was easier to deal with; I had something to focus on. It would give me a high . . . an almost euphoric feeling,” said Julia P. putting words to her battle with self-harm for the first time.

Although Julia cut to gain a sense of calmness, there were other reasons as well, that are all too common within the realm of self-harm.

“ I would cut and it would help me release the emotions that were hidden and building up to an almost unbearable level. It would help me cry when I couldn’t,” she said.

What Are the Precipitating Factors to Self Harm?

Self-harm has been linked as a response to a number of childhood incidents, including sexual abuse, assault, incest, feelings of worthlessness and helplessness, negative self-images as the result of an eating disorder, drug and alcohol abuse as well as family disruption or the death of someone close.

Although self-harm can be found across all cultural and age brackets, symptoms tend to begin at around the age of 14, according Dr. Favazza.

Although it is impossible to predict who might be inflicting self-harm, there are some signs to look out for, including wearing long sleeves in hot weather, spending more time alone, claiming to have an over-abundance of freak accidents, scars, cuts, bruises and other unexplained blemishes.

Every situation of self-harm is different but one thing is for sure. If you or someone you know is cutting himself or hurting himself in any way, it is important to talk to a mental health practitioner, because there are likely underlying psychological reasons for the behaviour that need to be addressed.

In some cases, medications such as SSRI anti-depressants, including Paxil and Zoloft, have been found to be effective, but individual cognitive behavioral therapy, which is centered around finding healthier ways to cope with life stressors, has been more effective at terminating symptoms.

In many cases, simply talking about it with a loved-one, trusted friend, teacher, or guidance counselor can be enough to start the healing journey. Self-harm is much more common than was once thought and is certainly nothing to be ashamed of. Talking about it and taking the issue out of the closet is the first step toward a healthy body and mind. HealthyPlace has more comprehensive self-injury information here.

'Is It Just Me?' Teens Transforming Stigma
Thinking Critically About Therapy
Leif Gregersen
April, 28 2013 at 4:50 am

I have self-harmed and I can say this article is really bang-on. The only thing I would add to it would be why I thought I wanted to self-harm. I was going through hell from depression, poverty, loneliness and all kinds of problems and I literally wanted to show on the outside the pain I was going through on the inside. It really seemed like people looked down on me because I was unable to do a lot of things and wasn't going to College or had any money. I wanted to make a reason for people to understand I was really sick with Bipolar Disorder.