When mental illness stigma comes from your own friends, it can be a very jarring and hurtful experience. Even the people that you hold close and trust can be guilty of judgement, hurting you emotionally, and may even stigmatize you. I have been diagnosed with bipolar disorder for 13 years, and even as of late, I have had plenty of experience with friends and mental illness stigma.

Stigma from friends may come in the most subtle ways and I honestly do not think that a number of my "friends" even realize that they have stigmatized me, and your friends may not know this either. I am assertive and people generally perceive me as confident, which is a good thing, right? Perhaps some of the time it may be, but I have found that due to my strong personality, I have run into the issue of having people being afraid to approach me when they have a personal issue with something I have done. Am I really that scary? Some seem to think so.

My Experience with Friends and Mental Illness Stigma

Having had a psychotic break many years ago, where my own reality became total 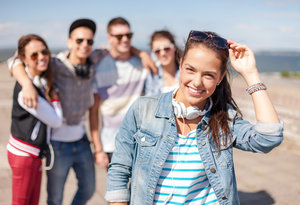 unreality, I did some questionable things. I would write for days on end with sleepless nights and devise 33 page electoral strategies to make me Prime Minister. It was not a wish, or a fleeting thought, but my writings were brilliant in my eyes. I also believed that the Prime Minister was stacking my bank account with endless amounts of money. At the time, I held two debit cards, and both were from the same banking institution, but both had the same pin code. One card held all the rent money as shared with my roommates and the other was my personal bank account. Psychotic or not, anyone could have made the mistake of exchanging one for the other at some point, but I unknowingly spent around $200 that was not mine.

In retribution, once I was finally hospitalized, my roommates had taken my key from me and then the stigma kicked in. I felt that I was being perceived as untrustworthy, or even worse, dangerous and unpredictable. I received threatening phone calls from them upon my release from the hospital, and I tried to explain that I honestly could not tell the difference between the two bank cards and I really did not know what I was doing. I apologized over and over again and promised to pay back the money as soon as possible. All I had at the time was $35 for food, a disconnected cell phone and a quarter of tank of gas. I felt so guilty for my actions, but now I realize their perceptions of me have actually nothing to do with me as a person. It is about them.

Mental Illness Stigma and Friends – It is About Them, Not You

We all have our issues, problems and concerns, but when these things are not brought to your attention, it can be nearly impossible to resolve any issue that may come up between friends. If I hurt you, tell me. If I made you angry, tell me. The much needed direct communication that is required to grow a friendship will help alleviate and conquer any mental illness stigma that may be coming from your friends. I have learned that people’s own perceptions of you is often about themselves and their own insecurities and fears, and if someone is judgemental and hurtful, then it is best to really decide if you want that person in your life.

I have been known to hold a grudge, but there is a difference between holding a grudge and just realizing that if I constantly surround myself with people who bring me down, then that is where I am going to be, at the bottom of my own emotional pit. Instead, I have chosen to cultivate friendships that may have been on the sidelines, not realizing the importance that they could truly have in my life. I want friends to lift me up, not cause me to feel mental illness stigma, and most of all be direct with me at all times because I am not unpredictable, dangerous or scary. If you were my true friend, then you would know this.

Have you ever experienced stigma coming from your own friends and what have you done about it?

APA Reference
Paquette, A. (2015, May 21). Friends and Mental Illness Stigma, HealthyPlace. Retrieved on 2022, August 15 from https://www.healthyplace.com/blogs/survivingmentalhealthstigma/2015/05/friends-and-mental-illness-stigma

I ended up living back home with my parents. It is hell on Earth, I am sorry to say. They are plain terrified of me, and I can only walk on crystal for so long. In fact, the whole walking on crystal caused me to become very verbally aggressive (a form of expression, they themselves have turned into an art form). So it became/is a viscous circle. It takes up so much of my energy, leaving me hording energy at all costs just to be able to make it to work.

For me stigma and shunning come from my brothers- and sisters-in-law. After 27 years, they are never going to understand, let alone like me. It's hard on my spouse to accept that his sibs and I are never going to have honest, positive relationships. I've been living with the stigma for 45 years; my expectations are low.

Being diagnosed with bipolar disorder changes your social standing. You are rudely dropped from a position of equality to an inferior place. I think friends first want to rescue you by convincing you that you are not sick, then abandon you because they don't associate with people below them. The thing is that they are not conscious of their treatment of you because they occupy a place of privilege where they are seldom if ever challenged for their behavior. It may be innocent, but it is also crushing.