There’s no denying mental illness stigma is a year-round occurrence, but, sometimes, different points in the year make that stigma feel more poignant (What Is Stigma?). Summer is one of those times because it boasts good weather and longer days, and, typically, people encourage each other to be outside. It’s time to “enjoy the weather” so to speak, but that’s not always so easy. Summertime mental illness stigma can be a problem. 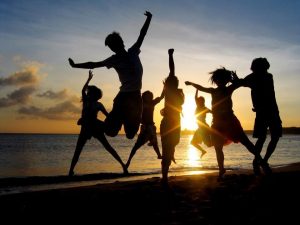 While a lot of people are eager to get out and soak up the sun, it can be really difficult to battle mental illnesses, even with the bright sun shining down on us. Depression doesn’t care how warm it is outside and anxiety doesn’t care about how awesome an opportunity sounds (mostly because anxiety will give you a dozen reasons about why it’s not so amazing after all). Those truths are hard to change and hard to deal with; it’s even more difficult when summertime mental illness stigma comes into play.

Here are some examples that can make people with mental illness feel less than great:

These probably seems like innocent enough words, but when they’re used to apply pressure to someone, especially after someone has said "no" or expressed their discomfort, it’s not so light-hearted anymore. Words have a lot of impact and weigh on a person; and when that person is already struggling, they’re hard to deal with.

It generates thoughts of “Why can’t I just go?” and “What is wrong with me?” (Friends and Mental Illness Stigma)

Invite People Out and Avoid Mental Illness Stigma This Summer

It would be completely ludicrous of me to suggest that people should just stop inviting their friends out during the summer for the fear of risking becoming a part of that stigma, in particular if your friend hasn’t been open about mental illness.

Instead, maybe give something like this a try: If you invite your friend out and he says he doesn’t want to go, even with gentle nudges, you could say, “Okay, maybe next time,” or “Is there something else you’d like to do?” It might sound kind of hokey like that, but my point is to try to find a compromise, and if you can’t find one, acknowledge that day just might not be a good day.

If you’re unsure how to help out your friend, ask how to best go about the situation. Working with someone instead of trying to blindly figure out what to do is probably the best way to go about it. Be a team and let that friend know you’re there (How to Help Someone with a Mental Illness).

Speaking as someone who deals with mental illness stigma more in the summer, even I don’t know how to deal with it sometimes. Having a support system is key to making it even a little bit easier.

For more about dealing with mental illness stigma during the summer months, watch this video.

Suicide and the Selfishness Stigma
Mental Illness Stigma and Handling a Job
Steph
May, 21 2016 at 1:41 pm

Summer is my hardest season. Thanks!

great advice in summer season 2016. Thanks

What a fantastic post! This really resonates with me! I have struggled with depression for more than 20 years and yes, I have had issues with it even in the summer! Actually, sometimes even more in the summer because here in Montreal, Canada, our summers are generally very hot and humid, so "getting out and about" is even more difficult when it is dangerously hot, especially when you are like myself and the heat and humidity really affect you. Thank you so much for sharing.