How Biphobia Hurts My Mental Health 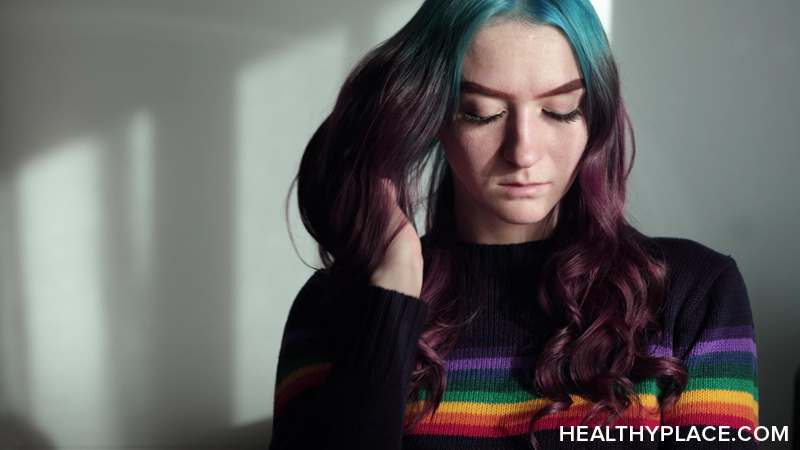 My last post examined harmful misconceptions about demisexuality (lack of sexual attraction without emotional intimacy) and how they are detrimental to the mental health of demi people. In this follow-up post, I want to talk about one of the most prevalent and harmful, yet -- in my opinion -- under-addressed issues in the queer community that causes immeasurable damage to social and mental health: biphobia.

Why Biphobia Is Harmful to My Mental Health

There is a wealth of information available online that examines the causes, manifestations, and consequences of biphobia on the mental (and physical) health of bisexual people, so for the purposes of this post, I'll be focusing on my own experiences with biphobia and how they have negatively impacted my mental health.

I grew up in a very conservative religious environment where I was conditioned to believe that queerness of any stripe was wrong, sinful, and intolerable. Add this to an overall societal misunderstanding of bisexuality and a lack of representation of bisexual people in the media, and I did not know that bisexuality was even a real orientation until I was much older. Yet, I remember that some of the earliest crushes I had as a child were on other girls, though I didn't recognize them as crushes at the time.

By my freshman year of high school, I had come to reject the teachings I received growing up about sexuality and queerness. However, I didn't come to the realization that I was bisexual until I was 23 years old. I believe it is something that I've always known about myself but was unable to acknowledge until I had put in a lot of work to extricate myself from my childhood conditioning and trauma. Thankfully, I had the support of several wonderful queer folks in my life that made the process easier. It was nerve-wracking to come out, but when I finally did, I also felt an overwhelming sense of joy that I was finally able to accept and be myself.

Unfortunately, there have been times when that joy has been rudely ripped away. I have been on the receiving end of biphobia from both straight people and other queer folks and have often felt as if I don't really "belong" anywhere. To further complicate matters, at the time of this writing, I am currently in a straight-presenting relationship. Straight people tend to have a hard time believing that I could possibly be attracted to other genders when I'm married to a man, even commenting that I've "already picked a side." On the other hand, more than one queer person has told me (in certain terms or otherwise) that because I did not come out until I was an adult, and because of my current relationship status, I have not "earned" the right to call myself queer.

The feelings of never quite fitting into either realm that I'm not "enough" for my own community, and of being perceived as "greedy" or "confused" do little to help my tendencies towards depression and anxiety. Human beings are a social species and need to feel like we belong and that we are seen and cared for. To have an integral part of your identity repeatedly erased or berated attacks the very core tenant of what it means to be human.

Navigating Biphobia and Tending to My Mental Health

I've come to accept that biphobia is something that I will always have to contend with, which -- as with anything -- is the first step towards healthy coping and navigation.

I have made it a priority to, insofar as possible, only surround myself with people who accept and embrace my identity. (Sadly, this has required cutting quite a few people out of my life, which has been difficult at times, but worth the effort.) I am happy to help educate folks who are genuinely curious and want to understand bisexuality better, but I do not engage with trolls or people who make demands on my time or emotional labor. Being intentional about who I spend time and engage with has done wonders for my mental health, not just relating to my bisexuality but in other facets of my life as well.

I have also learned over the years not to take biphobia personally. The majority of the time, people who perpetuate biphobia are either ignorant or have their own vulnerabilities, insecurities, and traumas surrounding their sexuality that need to be addressed and healed. It is not my responsibility to convince those people that my sexuality is real and valid, and that realization has been incredibly liberating.

Perhaps the biggest thing that helps me navigate and push back against biphobia is by offering myself as a source of support and comfort for other queer folks, bi or otherwise, who are in need of validation, especially for my peers who are newly out or grappling with their identity. Giving others a safe space to be themselves builds strong community ties that make us all safer, and being a part of that process helps me as much as it helps others -- and gives me hope that things can change.