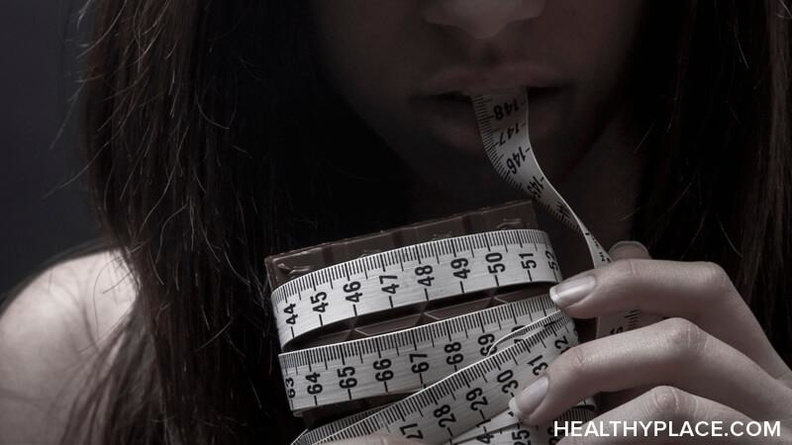 Why would a person purposefully starve, even to the point of death? "There is something very seductive about not eating very much, thinking that those around you are weak and have to eat," says Angela Lackey, our guest on the HealthyPlace Mental Health TV Show speaking about her experience with anorexia nervosa. "It makes you feel strong and special; you don't think about the fact that you can die from anorexia and that many people do die from anorexia."

In the fall of 2006, when I was 41-years-old, I developed such severe migraines that I had to be taken to the emergency room several times a month for pain and anti-nausea shots. The migraines were so bad that I would throw up five to six times, sometimes more, and sometimes was given IV fluids for dehydration. I started to rapidly drop weight, often two to three pounds a week, without trying.

I looked at my naked body in the mirror, stripped of 20 pounds, and was utterly frightened by how I looked. I turned to my husband and said,"I hope you don't expect me to diet to maintain this ridiculously low weight."

Many people thought 105 pounds was just the perfect size for me, and I got many compliments on my "slender, delicate, tiny" figure. I started thinking, "I must have been fat before, that's why all these people are now telling me how great I look." I began to get scared that I would gain the weight back and become "fat" at 125 pounds. The fear took hold and wouldn't let go, so I started cutting food. First it was a little bit here, a little bit there. As I wouldn't feel hungry, I would cut a little bit more.

Then came the holidays of 2007. My husband and I had friends over for dinner. I was still trying to eat somewhat normal, although my husband and I were already arguing over the amount of butter to put in the rice. By then, I knew I wanted to lose a few more pounds. Still, I tried to eat normal at dinner, and succeeded. And right after that dinner, even before the company had left, I marched into the bathroom, closed the door, and swallowed a half-packet of laxatives to get rid of the food. I've not eaten normal since that day. I was 42.

Have you been diagnosed with anorexia nervosa? Or are you going through eating disorder recovery for yourself or with a loved one? Please share your comments below.

Managing Bipolar Disorder Symptoms on the Job
Life with Schizophrenia: A Journey from Torment to Triumph