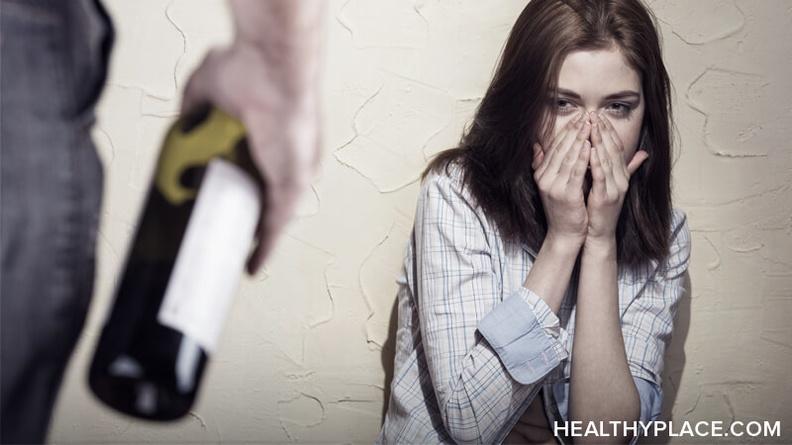 In an abusive relationship, it is important for abuse victims to realize the warning signs of impending abuse. We need to know that the relationship is a battleground ready to erupt in controlled violence at any second. You, the targeted victim, can learn to predict when abuse is about to happen if you pay attention to tell-tale signs within yourself and broadcast by your abuser. I can tell you what happened within me before abuse erupted, and my hope is that you will be able to use the examples in my list to recognize and write down your warning signs of impending abuse too.

In general, in the days or hours leading up to a domestic abuse incident, I would feel:

I lived through years and years of thinking that I suffered from depression and anxiety because of a problematic brain illness that could explain my physical symptoms, thought patterns and paranoid feelings. The anti-depression/anxiety medication helped, but it did nothing to explain to me the truth. The problem wasn't inside of me, it was in my environment. My body and mind were enacting "fight or flight" symptoms in reaction to the hostility in my home. My body was telling me to "get out of here!" but I didn't listen to me.

Like my internal symptoms, there were things my abuser would do before erupting.

Days or hours before he'd attack, he would:

Right before unloading an abusive attack, he would:

In the beginning, I told myself that he was frustrated when he acted that way. I knew "frustrated" wasn't the right word, but calling his actions that helped to divert my attention from the likely outcome. His frustration would abruptly end as soon as he evoked the emotion out of me that he wanted. As soon as I was angry and incoherent, he would switch into calm mode and I would feel like a fool for getting so out of control.

He seemed to want me to be angry so he could validate his own feelings of anger by seeing them in my face. I think that he "trained" me not to cry (my innate reaction to the fear and pain he induced) because tears did not mirror his anger - tears showed that I felt differently about the situation than he did, and abusers don't want their victims to be different from them. He didn't want me sad or scared, he wanted me angry.

It Isn't Fair That We Must Be So Aware

It is important for abuse victims to know the warning signs of impending abuse so you can initiate a plan that protects you from it. It isn't fair that victims of abuse must be the ones constantly on guard, ready and waiting for "it" to happen again. It isn't fair that when "it" does happen, we are the ones who must leave the situation in one way or another. The abuser is the dysfunctional catalyst in the hell that has become our home, but we must be the ones to take care of ourselves.

After you make your list of warning signs, please take some time to think about what you can do before and during the abusive incident that is coming. Stop pretending it will never happen again, you know it will, it has repeated itself time and again.

There's a free domestic violence safety plan on my website. I hope you download it (scroll to the bottom of the page for the free version).

ever live life walking on egg shells. nothing is ever good enough, no support in my interests, always running my kids down or finding something negative of what and how they live. I use to be the fun guy always laughing and joking now I am a recluse. I also have ptsd from Vietnam and no support there. I feel like I am beaten down and there is no recovery. Am I suicidal NO. Do I wish I would go to sleep and not wake up yes. Intimacy no way she is not interested at least in me. The major obstacle is I really do LOVE her, but 7 years how much longer can a person take it.

This article really resonated for me. I am a man in a verbally abusive relationship. much of it fueled by my wife's drinking. I can feel "spidey sense" go off a good 12 - 24 hours before I get my "beating" - which is verbal not physical. but I am told that it is a kind of tough love that is good for me. my wife is also a lawyer so you can only imagine the circular word games that are played - the being forced to disprove a negative, etc. , etc. I used to just blame it on the booze - sort of a sideways version of being able to forgive but I know that is not true. So many words so much confusion. Like the article above the anxiety interupts my work for at least a day prior and days afterward. And yet when I try and leave it is all about how much she loves me, etc., etc.

Aha moment! I have been thinking he likes to see me sad or gets a thrill out of scaring me but when you wrote that he wants me to feel angry like him (his teddy bear) it all makes sense. I do go more often into anger now and have seen that he looks like he enjoys it before he starts to put on a 'victim act'. Now he can say I am the problem and I am abusive. I am playing into his trap of 22 years of looking like the 'bad one' to everyone including myself. Trouble is I am so emotionally overloaded I always have some sort of reaction and find it hard to remain calm, if I do he will provoke me until he gets a reaction and I am not in a position to just leave the house.
I have read your book ( I contacted you once with my thanks) and am making my way through your blog posts- you are really a good writer Kellie and your work is helping me as I try to survive my situation.

Thank you, Sharon, again. Yes, you are definitely right about them turning things completely around on you! They want you to feel angry, bad, defeated, useless,...they want to put those feelings into their "teddy bear" because then they don't have to feel them, and with you out of control (in your mind or actions) they feel more in control.
Patricia Evans is the author who came up with the "Teddy Story", but I do talk about it in the book.
I remember those days before I just left the house. I understand that option is not available to you. Try to "leave the house" in your head. When he is berating or lecturing you, look at him if he expects that you look at him, but go into "definition mode" in your head. When he says something that hurts you, define what he just did to you in your head. This keeps you focused on the fact that he is using his abusive toolbox to get a reaction out of you; you are not a robot and tools like his don't work on you.
One of the best books I can recommend to you is Patricia Evans' book "Controlling People: How to Recognize, Understand, and Deal with People Who Try to Control You"
The "understanding" part helps you to turn the switch in your mind from "I have to defend myself in a way he understands (but makes me feel bad about myself)" to "I can defend myself in a way that makes me feel better about myself (without falling into his traps)."
One more thing - Sharon, you are not "trying" to survive - you ARE surviving. You already are a survivor. You have the choice to stay or leave or leave for a while and then return... the choices are there for you all of the time. You currently CHOOSE to stay, and that is okay. Own that decision and use it to empower yourself.