Personality refers both to who you are at your core and how others perceive you to be. Personality is a slippery word because it includes both what you feel to be true about yourself and what other people think about you - your thoughts that lead to emotion (invisible) and behavior (visible).

So, on the one side of personality, we have the invisible core of "who you are" as defined by you. On the other side of personality, we have the visible version of you as defined by other people. Gurus say that "authentic people" are those who say as they do and do as they say. In effect, the goal of authenticity is to project your definition of yourself to everyone else consistently, and align the invisible with the visible.

Nothing challenges our personalities more than living in The Big Lie (aka abuse). The Big Lie confuses our thoughts and emotions to the point of feeling insane. We see ourselves behave in ways we never thought we'd behave. The resulting emotions of anxiety, fear, and emotional pain reflect our sense of "losing ourselves" and disappearing because our actions and words no longer accurately show "who we are".

By and large, the abuse victims I've spoken with are the most authentic people I've ever met after they've come to accept that they're being abused. These "victims" are now survivors, and they will continue to be survivors so long as they continue to be authentic. Being authentic is a choice, and survivors know it. When it comes down to it, an abusive relationship leaves you with two choices:

Both choices result in abuse. Your abuser wants you to be exactly like them all of the time so they don't have to use their energy to control you. This is impossible.

Choice number two keeps you in the cycle of abuse and the cycle of abusing your Self. Pretending to be someone you are not causes confusion, anxiety, irrational thoughts, and erratic emotional reactions. These feelings can hide the fact that you are not being true to yourself and are instead lying to yourself. Choice number two does not allow authenticity because you listen to your abuser instead of your Self. 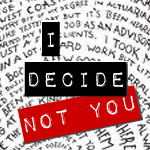 Abuse causes personality changes. It is up to you whether you want to keep those changes or not.

Sometimes, our first rebellious thoughts are to go back to being the way we were before (flirtatious) because "gosh darn it, that abuser doesn't control me anymore!" But is that what you really want? Would flirting help your career?

Our minds tend to want to revert to what was familiar. When this happens, we might forget that there are options between flirtatious and closed off. After you end the abuse (whether by leaving or staying due to a miracle change), part of the fun is deciding who you are NOW.

You get to make or re-make yourself according to who you want to be. It is an option you felt you didn't have during the abusive relationship, yet people blessed with normal relationships get to do it all the time. Finding your authenticity after abuse is, to some extent, trial and error. You may make some mistakes. From those mistakes, use your freedom to change your behaviors and thoughts.

Before too long, your emotions will settle into peaceful bliss and your authentic self will learn to appreciate your strengths and accept your weaknesses. Your life will be blissful because you decided who you wanted to become.

Unfortunately, if you stay long enough to experience physical violence resulting in traumatic brain injury, your personality may biologically change and you will no longer get to choose who you are. Verbal abuse is a red flag for physical violence.

After Emotional Abuse: Do the Side-Effects Ever Disappear?
Three Important Skills You Need To Cope With Abuse
Sabrina
May, 12 2022 at 1:29 am

Does some of the info in this article also refer to childhood sexual abuse?

I'm so glad you covered this topic. I really gained some insight from your article. I was in a very abusive relationship for four years - it finally ended in 2019 my ex was sentenced to prison. I have been able to breathe a sigh of relief while he is incarcerated and I have slowly began to heal. Through trauma therapy, I have accepted my situation, grieved my former self, and laid her to rest. I have since been trying to get accustomed to my new self - a journey that has its positives and negatives. I feel extremely uncomfortable in my own skin, around men, around family, and especially around friends I've know for a lifetime. The hardest part is seeing the look on their face when I say or do certain things that are out of my character of my former self. It makes me feel completely isolated and misunderstood. I have struggled with drug addiction, and a diagnosis of CPTSD and bipolar II that was a direct result of the abuse. All those elements combined make me feel like a mess, but still have hope that I will figure it out. Thank you for this article and for all the people who commented - sharing our personal stories of abuse is tough, but so vital for healing.

I have been raped, hit in the head and controlled for over one year. He was coming to My country after 3 hours everytime when I had different opinion. Didn’t accept for who I was. Threatening me and my family. I was so scared constantly on the phone talking in language I didn’t know. Couldn’t cut him out as he was unpredictable. I was 25 and it was 10 years ago. Had a nightmares and personality change until now and still after 10years Im feeling numb plus didn’t understand people from my own country and don’t remember things. After 10 Years I feel like I’m not from my own country and can’t adapt my own culture.

Ive been controlled for as long as I can remember.by first my father and school peers.and latterly by spouse. I find my I’m always expecting to be hurt all the time. And I’m getting internally angry at people I’ve had it for too long I escape into a make belief world when I’m alone then have. To reaadjust tot the expectation of the people who control me.
Help

Hello John, I am Cheryl Wozny, one of the authors from the Verbal Abuse in Relationships blog. I am so sorry to hear about your situation, but I am very glad that you found the courage to reach out to someone and seek the help you need. Depending on your location, you may have access to a wide variety of resources in your community. You can start by visiting our page for Referral Resources here: https://www.healthyplace.com/other-info/resources/mental-health-hotline-numbers-and-refer…. Mental Health America in your area should have some great places for you to start learning how to heal and move forward. I wish you the best of luck getting the support you need to help your situation.

Hi Kellie, I have been looking through your blogs and really connected with your story. I'm trying to make a decision on what would be best for me and my 3 month old baby. His father is deployed and I made the decision to leave the relationship but have been confused if I should let go of it completely and give up all hope.
I go around in circles sometimes thinking I did things that created more chaos in the relationship with my mindless retaliation after constant verbal abuse. The last straw was an incident that became physical with my child in my arms. My ex has convinced me in some ways that my past behaivor has been just as "bad" and he never really took responsibility for what happened, minimizing it by putting it back on me that I too need help. I admit that I do! :)
I want to do whatever I can as a mother to make the best decision for me and my son and not sure what the next step is. I am moving out on my own and my ex will be returning from the deployment in the beginning of December. I am a school teacher in North Carolina and do not have family in the area. I want to feel as emotionally strong as possible to be prepared for when he gets back. I told him the relationship is over for now but he would like me to reconsider for the sake of our child. Any suggestions or feedback you can give me would be greatly appreciated.