The Cycle of Violence Doesn’t Tell the Whole Story 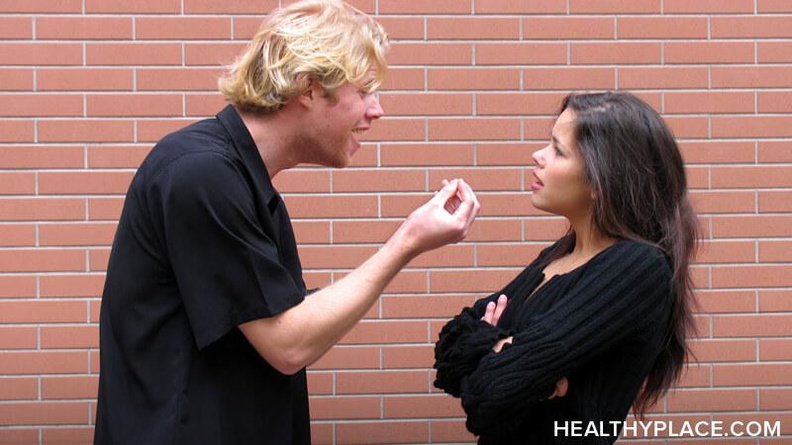 We tend to speak of the cycle of violence and abuse as if it were a constantly turbulent system, but we rarely discuss the routine that makes it easier to stay in an abusive relationship, the mind game that soothes the volatile system into manageability. The wheel of violence and abuse shows the cycle concisely, but too narrowly. The wheel shows the cycle as a rolling circle of abuse, honeymoon, tension-building, abuse, honeymoon, tension-building, abuse -- visually repeated infinite times with arrows circling around the wheel until we say to ourselves, "I get it! It's so simple." But then we feel shocked that victims of abuse don't just leave. After all, the wheel makes the cycle of violence and abuse so transparent that victims 'should be able to leave.' Despite its powerful (and necessary) message, the wheel simply cannot tell the whole story.

Danger lies in believing that the wheel tells the entire story of domestic violence and abuse. The lucky ones, the outsiders who do not face abuse in their homes, see the simplicity of the wheel and imagine the cycle spinning as clearly as the simple chart lays it out. It is no surprise they wonder why abuse victims don't quickly get it and get out. After all, we can see right there on the chart the undeniable nature of the cycle of violence and abuse. Surely the victims can see the truth too. The visually simplistic aspect of the wheel maintains the idea that victims of abuse must be stupid, asking for it or enjoy the abuse to stay with their abusive partner.

To be clear, the wheel is a valuable tool for those living the cycle of violence and abuse. It accurately portrays the cycle within which victims find themselves inexplicably stuck. However, the wheel cannot explain why people stay within the abusive relationship. It is dangerous to leave out the whys because society's contempt and misunderstanding for the victims results in lack of resources for both victim and abuser.

The Cycle of Violence Spins Unpredictably

The cycle could spin extraordinarily quickly as the wheel implies. One day could hold multiple episodes of tension building, pain and apology. However, days like that tend to be rare because they emotionally (and sometimes physically) exhaust both victim and abuser. It feels as emotionally draining to abuse someone into submission as it feels to fight one's way out of the abuser's web. After 24 hours of giving and receiving abuse, making up and making promises provides a welcome respite for both parties. Typically, days like that act as a "blatantly abusive episode" instead of a normal day in an abusive relationship.

On the other hand, the cycle of abuse could spin very slowly, and years may pass between "blatantly abusive episodes." These slow-brewing cycles make it very difficult for an abuse victim to recognize their partner as an abuser and themselves as a victim of recurring abuse. It becomes more difficult for a victim to define the relationship as abusive when:

Slow cycles do not lend themselves to television dramas or movies, especially if the abuser avoids (or avoids leaving marks from) physical violence.

The cycle mutates depending on the immediacy of the abuser's perceived need to regain control of their victim (and therefore, themselves). The cycle spins fastest and most painfully when the abuser perceives an immediate threat to his or her control. When the abuser feels in control and comfortable for a time, he or she doles out maintenance doses of abuse to reassure them of their control and remind their victim that life could get really bad really fast if the victim makes a mistake. Maintenance periods, the times of slow cycling, define a term not often seen on the wheel: "the routine."

The routine makes staying in an abusive relationship manageable, and is one part of the answer to "why do they stay?"

Next week, we'll talk about the dynamics of the the routine in hopes of understanding why people stay in abusive relationships, especially those relationships that span a decade or more.

Tags: cycle of violence and abuse

Co-parenting with a Toxic Ex Challenges Abuse Survivors
The Routine Makes It Easier to Stay in Abusive Relationships
marij
April, 30 2015 at 1:56 pm

Where do I turn. It took me eleven years before I fled my home after another unnecessary rage resulted in saying he wanted to kill me. I know now I've been in a horrific cycle of PTSD....severe trauma along with difficult physical limitations these past few years. During divorce hearing, without an attorney, the panic, difficult breathing...fog I apparently agreed to his attorney motions. I didn't even get the agreement paperwork til my domestic violence advocate brought it to the hearing that morning...postmarked the day before the trial. I'm disabled, near penniless because I froze in terror of being in a room with two men...his attorney and a young kid serving as referee...he even yelled at me unjustified...and the PTSD then just took over my shaking body. I . I can't remember little of being in front of judge for settlement hearing. My initial attorney I now know joined forces with opposing counsel to prove I shouldn't be on disabity...my now exspouses anger and abuse skyrocketed when I was forced to apply for medical and was approved bringing in little money per month. I became a burden and useless without being able to work...to my spouse. Are there divorce attorneys who specialize in helping disabled people who can't function well with PTSD during a divorce? My initial low income attorney totally misrepresented herself as experienced with proven domestic violence and working with my disabilities that I put in writing
I want to survive these years of nightmare...but need advice on where to get an honest pitbull attorney like my abuser had. I'm getting PTSD counseling to cope but I need my settlement modified immediately. Because of the domestic violence no one knows an honest attorney who can understand my disability complexities..and how paralyzed I've become in scarey situations. I'm devastated and in Michigan. Please, help me.

I cannot give you legal advice or suggest an attorney.
It's possible to find an attorney here: http://michiganlegalhelp.org/organizations-courts/find-lawyer
Community services based on your county: http://michiganlegalhelp.org/organizations-courts/community-services
If you live in Macomb, Oakland, Wayne county: http://www.ladadetroit.org/ (If you don't live in one of those counties, this organizaton may point you to a similar resource in your county).
The key to finding the help you need is to 1) Be a pitbull yourself: Don't let go of finding the right help for you, tied with 2) ASK QUESTIONS: as you call these places, ask for what you need and then ask if they know where you can get it. As you ask questions and get their answers, you'll be able to formulate new questions. Those new questions may lead you back to the original services who turned you down, but call them anyway and ask the new question.
You have to go on an information gathering mission to find the right help for you. Fortunately, the Internet can give you several leads. Those leads may or may not be the organizations that end up helping you.
I am sorry for your troubles. I hope you find the help you need.

Thank you for writing this. Sadly, most people don't understand or have compassion for people that stay in an abusive relationship, or people who leave but struggle with recovering from the relationship.
I left a verbally abusive relationship. It was only 3-1/2 years long, but enough damage was done. I miss the good times, feel lonely and am not only grieving the loss of a relationship, but healing the trauma and self-doubt that was triggered by the abuse. I sometimes feel judged, even by close friends, who can't understand why I'm hurting and sad. Their attitude is "you should feel relieved. Get over it already."
Most people do not understand that while deep in an abusive relationship, it's sometimes difficult to notice the slow escalation of events, which slowly erode the victim's self-esteem. This is why leaving and healing from this kind of loss is much more complex than most other losses. Thanks for understanding and writing a great article.

Today marks the 2yr. anniversary of my ex assaulting me in front of my 2 children. It was a very traumatizing time for me. It wasn't his first time, it was the first time he got caught. It took him 8 months to finally plead guilty to the charge. He was hoping I would drop the charges. I'm glad he was convicted, and is serving probation for 2 years. As all abusers believe that they are not abusers, he distorts the truth by telling everyone I had him charged and that he was not to blame for "losing it". My children also believe it, they've forgiven and forgot it. I on the other hand will never forget it. Part of his probation order was attend an abuser program, which he quickly complied to, however, he did not acknowledge his abusive behavior nor did he feel accountable. Abuse is a choice he made and nothing else. Perhaps jail time would teach him.

This is soo true.

Amazing piece Kellie. I can't wait to read next week's on the dynamics of the routine. You sure hit the nail on the head!