Bulimia Recovery: Admitting You Have Bulimia

Admitting I had a problem was my first step to bulimia recovery. With time, wisdom, and experience, I’ve come to terms with my diagnosis and accepted that bulimia did not define me. My acceptance of the diagnosis was a starting point, a breath of fresh air, much like walking out of a room in college when you decide this party’s over, I’m heading home. As uncomfortable as that experience was, being diagnosed, for me, felt like coming home. 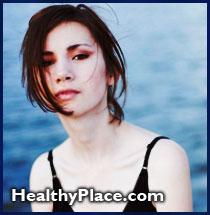 In 2007, I had my gallbladder removed after developing gallstones due to endless episodes of starvation followed by large consumption of high fat foods and purging over a period of about 4 years prior. It was just one of several eating disorder health problems and complications that I came up against. This coincided, in my life, with the stress of going through law school and realizing, with each passing year, that I had no interest in becoming a lawyer. Eventually, this lead me to a gurney, doubled up in pain, feverish and holding my father’s hand while being told I needed emergency gallbladder surgery or else my pancreas could be damaged.

Cut to me, summer of 2008, sitting in my therapist’s office while she read through my file, quietly. I started my eating disorders therapy many months post-surgery because, at first, I thought I could white-knuckle my way into bulimia recovery. That didn’t work and I ended up way over my head. My doctor, who I kept in the dark, had blamed the gallbladder attacks on stress and family history, but deep down I knew I had been playing Russian roulette with my health for those last few years. Strangely, the doctor didn’t think to ask anything about my eating habits. Had he asked, to this day, I’m not sure what I would have answered. Today, with hindsight, I know though, had I continued on that path, I probably wouldn’t be writing this blog today.

Afraid to Admit I Had Bulimia

The operation made me come to terms with the fact that I, at the very least, had some serious food issues. I feared admitting to having anything more than that, because admitting it would mean admitting to the world that I was suffering from a mental illness. I was petrified of being called an attention seeker, a nut job, or any of the other insults that are usually used to label those with any type of mental illness…and worse, I was afraid of being called shallow and made fun of for letting my self-image matter enough to manifest my “issues” into serious physical damage.

(Surviving ED author, Jess Hudgens, shares her story of overcoming stigma and coming out about her eating disorder. If you feel it's time to quit hiding, join the Stand Up for Mental Health Campaign.)

Hi there,
Thank you for sharing your story. After my nightly purge (some weeks/months are better than others) I began searching online for a "Dr. Google" diagnosis. Hoping in part that the info I found would confirm that yes, I do, or rather still, have an eating disorder yet at the same time thinking , nah, there's no way this us serious enough to be diagnosable as an actual disorder. You see, I have cycles. I started at 16 when I essentially dtopped eating, exrrcised exciessively, purged anything I did eat eve if it was just salad. I felt great! I was thin and pretty and people liked me. When I became pregnant with my first child that stopped. I was careful to eat enough heslrhy food for my baby. I liked food, I liked eating. After he was born, I started worrying about the weight I'd gained but I still wanted to enjoy the food. I didn't have as much time for exercising so I started purging. I could go months without doing it and then I would start again for months
I'm almost 52 now. I had a tooth implant this year and emegency gall bladder removal last month. Your mention of your gall bladeer caught my attention because it's not something I've found in any article so far to be related to bulimia. I wanted there to be a link, yet I didn't at the same time. I don't was to be "sick", damaged , crazy, imperfect, but I am imperfect in so many ways. I don't want to admit I may have a problem because I don't want to be that broken, weak person . But I am and I'm ashamed. It feels good to share. If I had not come across your post about your gall blader, my denial would have been easier. So thank you. I hope you are healing.

Hi Vic,
Thank you for reaching out and communicating your experience. I know it can be difficult, but I would encourage you to seek out help. Please see HealthyPlace's list of hotline numbers and referral resources (https://www.healthyplace.com/other-info/resources/mental-health-hotline-numbers-and-refer…), as well as our Eating Disorders Community page (https://www.healthyplace.com/eating-disorders). Once again, I appreciate the courage it took for you to share.
Mary-Elizabeth Schurrer
"Surviving ED" Blogger

Please how do you get help without telling anyone

Hi Louise. To begin, I'm glad that you are clear that you'd like to not throw up everyday and be able to be honest with your mom and dad. About your question about how to get help without telling anyone . . . some of that depends on your age. If you're a legal adult you can seek out a therapist on your own at anytime and what you say is bound by certain laws of confidentiality. My guess, however, is that you may be a little younger. Two things come to mind for me to share with you. First, the reason it took me so long to recovery is because I was terrified of anyone finding out and I refused to seek out the help I needed. Looking back on it, I wish I would have told someone safe WAY earlier so that they could have helped me get the treatment I needed. The longer the eating disorder goes on, it can make us feel more and more helpless against it (which you are not.) My advice is to get help even if it means you have to tell people. With that being said please continue to this next part. Second, you never have to say (to your parents or anyone else the words "I have an eating disorder." Rather, you can say that you're in an unhealthy place with food or body image, and that you want to see someone to be at a healthier place again. YOU get to choose what you tell people. With your therapist however, please be as honest as you can so they can best help you on your road to health and happiness. I hope this helps. Thank you for reaching out and please let me know if you have further questions.

I'm 34 and I've been bulimic now nearly 21 years. Like you guys I'm having serious issues with my gallbladder. Serious enough that for the first time in 21 years I've just gone 8 days without making myself sick out of pure fear of the damage I've done to my body! To say I'm scared is an understatement. I can't tell anyone they'd be so disappointed! Some days I could do it 5, 6, 7 times maybe more. Everything I ate came back up! I don't know why I'm writing here I just felt the need all of a sudden to say it to someone! Thanks for reading!

Hi Taylor. Thank you for sharing. You are loved and supported by this community no matter what part of recovery you're in and no matter if you have good days or bad days. Are you currently seeing a therapist or have healthy support in your life?

I had binging episodes that ended in pain. I would it the stress away to the point of colic pains in my left upper abdomen - this pulsating colic that comes and goes, and sometimes radiating to the middle of chest as a sharp prick when I take a deep breath, and sometimes radiating to the right shoulder blade.....I guess it's a gallbladder. I don't know what it is....I went to ER many times.....one day I realized that eating the way I did will lead me to a very early death, and the colic pain was a language my body spoke to me....So, I started keeping track of my food intake and slowly stopped binging by paying attention to my thoughts. emotions and admitting them. The binging stopped....over 6 months I even lost 10 pounds of "pregnant" belly. But the colics remained.....ultrasound test did not find any stones, and no doctor was able to diagnose my pain....I only know one thing - my intuition tells me that the colic pain started because of my binging....But I don't know if it's my spleen, gallbladder, apendycytis, ot stomach.....I only pray God now it will go away...

Hi Melissa!
Fear is entirely normal. You can't control what will happen once you embark on recovery. There might be a sense of loss accompanied with it at first because it's a big step to live without the behaviors that go with it, but it's minor compared to the relief and strength recovery will bring to your life. Everyone deserves to be free from ed. Good luck in your recovery.

@Melissa,
I won't pretend to understand your motivations, but in posting this publicly, you did ask for some help, so good job!
Asking for help shouldn't be something you should be afraid to do, we all need help sometimes. You'll know who the right person is and maybe it's even a stranger who works at a support network in your area.
As for ED defining you, i'd say that admitting it is a part of your life has already made it a part of who you are. What you do from here will be what defines you. You may feel lost at first but have faith in yourself, your will to survive this seems to be strong, you have all our support in getting there.

I'm 16 and I've had an ED for about 5 years (alternating between anorexia and bulimia). I've been contemplating about telling someone and getting help for a couple of months now. I guess the biggest thing holding me back is the fear of and the question of what comes after people know and after I have to stop. I feel like I would be lost without my ED.