Find out why Anafranil, Clomipramine is prescribed, side effects using Anafranil, Anafranil warnings, effects of Anafranil during pregnancy, more - in plain English.

Why is Anafranil prescribed?

Anafranil, a chemical cousin of tricyclic antidepressant medications such as Tofranil and Elavil, is used to treat people who suffer from obsessions and compulsions.

An obsession is a persistent, disturbing idea, image, or urge that keeps coming to mind despite the person's efforts to ignore or forget it---for example, a preoccupation with avoiding contamination.

A compulsion is an irrational action that the person knows is senseless but feels driven to repeat again and again---for example, hand-washing perhaps dozens or even scores of times throughout the day.

Most important fact about Anafranil

Serious, even fatal, reactions have been known to occur when drugs such as Anafranil are taken along with drugs known as MAO inhibitors. Drugs in this category include the antidepressants Nardil and Parnate. Never take Anafranil with one of these drugs.

All antidepressants can increase the risk of suicidal thoughts or behaviors. Read this FDA warning.

How should you take Anafranil?

Take Anafranil with meals, at first, to avoid stomach upset. After your regular dosage has been established, you can take 1 dose at bedtime to avoid sleepiness during the day. Always take it exactly as prescribed.

This medicine may cause dry mouth. Hard candy, chewing gum, or bits of ice may relieve this problem.

Store at room temperature in a tightly closed container, away from moisture.

What side effects may occur from taking Anafranil?

Side effects cannot be anticipated. If any develop or change in intensity, inform your doctor as soon as possible. Only your doctor can determine if it is safe for you to continue taking Anafranil.

The most significant risk is that of seizures (convulsions). Headache, fatigue, and nausea can be a problem. Men are likely to experience problems with sexual function. Unwanted weight gain is a potential problem for many people who take Anafranil, although a small number actually lose weight.

Do not take this medication if you are sensitive to or have ever had an allergic reaction to a tricyclic antidepressant such as Tofranil, Elavil, or Tegretol.

Be sure to avoid Anafranil if you are taking, or have taken within the past 14 days, an MAO inhibitor such as the antidepressants Parnate or Nardil. Combining Anafranil with one of these medications could lead to fever, seizures, coma, and even death.

Do not take Anafranil if you have recently had a heart attack.

If you have narrow-angle glaucoma (increased pressure in the eye) or are having difficulty urinating, Anafranil could make these conditions worse. Use Anafranil with caution if your kidney function is not normal.

If you have a tumor of the adrenal gland, this medication could cause your blood pressure to rise suddenly and dangerously.

Because Anafranil poses a possible risk of seizures, and because it may impair mental or physical ability to perform complicated tasks, your doctor will probably warn you to take special precautions if you need to drive a car, operate complicated machinery, or take part in activities such as swimming or climbing, in which suddenly losing consciousness could be dangerous. Note that your risk of seizures is increased:

As with Tofranil, Elavil, and other tricyclic antidepressants, an overdose of Anafranil can be fatal. Do not be surprised if your doctor prescribes only a small quantity of Anafranil at a time. This is standard procedure to minimize the risk of overdose.

Before having any kind of surgery involving the use of general anesthesia, tell your doctor or dentist that you are taking Anafranil. You may be advised to discontinue the drug temporarily.

When it is time to stop taking Anafranil, do not stop abruptly. Your doctor will have you taper off gradually to avoid withdrawal symptoms such as dizziness, fever, general feeling of illness, headache, high fever, irritability or worsening emotional or mental problems, nausea, sleep problems, vomiting.

If Anafranil is taken with certain other drugs, the effects of either could be increased, decreased, or altered. It is especially important to check with your doctor before combining Anafranil with the following:

Barbiturates such as phenobarbital
Certain blood pressure drugs such as Ismelin and
Catapres-TTS
Cimetidine (Tagamet)
Digoxin (Lanoxin)
Drugs that ease spasms, such as Donnatal, Cogentin, and Bentyl
Flecainide (Tambocor)
Methylphenidate (Ritalin)
Major tranquilizers such as Haldol and Thorazine
MAO inhibitors such as Nardil and Parnate
Phenytoin (Dilantin)
Propafenone (Rythmol)
Quinidine (Quinidex)
Serotonin-boosting drugs such as the antidepressants
Luvox, Paxil, Prozac and Zoloft
Thyroid medications such as Synthroid
Tranquilizers such as Xanax and Valium
Warfarin (Coumadin)

If you are pregnant or plan to become pregnant, inform your doctor immediately. Anafranil should not be used during pregnancy unless absolutely necessary; some babies born to women who took Anafranil have had withdrawal symptoms such as jitteriness, tremors, and seizures. Anafranil appears in breast milk. Your doctor may advise you to stop breastfeeding while you are taking Anafranil.

The usual recommended initial dose is 25 milligrams daily. Your doctor may gradually increase this dosage to 100 milligrams during the first 2 weeks. During this period you will be asked to take this drug, divided into smaller doses, with meals. The maximum daily dosage is 250 milligrams. After the dose has been determined, your doctor may direct you to take a single dose at bedtime, to avoid sleepiness during the day.

An overdose of Anafranil can be fatal. If you suspect an overdose, seek medical attention immediately.

There is a danger of heart malfunction and even, in rare cases, cardiac arrest. 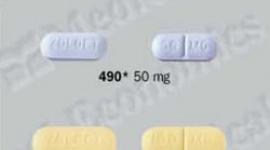 Mental Illness: Why Me?

3 Healthy Habits to Help You Deal with Post-Election, Societal Stress