Internalizing What Other People Think of Bipolar Disorder

What People Think of Bipolar

Some people are downright ludicrous when it comes to characterizing people with bipolar disorder. I mean, really, the “evil” word does come up (I Hate the Mentally Ill -- My Ex Was Bipolar and She Was Evil). People blame a bipolar partner for wrecking their lives. People say to never get into a relationship with a person with bipolar disorder. People say such horrible things about us that it contributes to self-stigma and discrimination from others.

The Negatives that Others Think about Bipolar Disorder 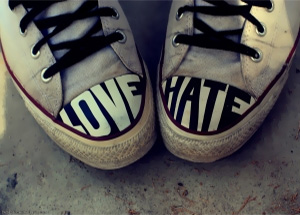 Those things are simply generalizations. Those things are just experiences that one person had with one person with bipolar that they are putting onto the rest of us. It’s like saying that “African-Americans are angry.” That statement wouldn’t be acceptable because it’s a generalization that’s not remotely true. And people would hear its unfairness and untruthfulness as soon as it was uttered (I would hope.). We would all recognize that characterizing a huge group of people in only one way was unacceptable and it’s the same for generalizing to all those with a mental illness, too. Are there angry African-Americans? I have no doubt that there are. Are all African-Americans angry? No, of course they’re not.

Internalizing What Others Think of Bipolar Disorder

I can tell you that on my dark days, I’m guilty of internalizing some of what others think of bipolar disorder (Living WIth Mental Illness And Self-Stigma). While I know, unequivocally, that I am not those things, some part of me still feels “lesser than” all the “normals” because of these harsh, cold, inaccurate statements. I think in a culture of negativity, this is pretty normal.

You Are Not What Others Think of Bipolar

But you are not what other people think of bipolar disorder. You are worth more than a mere sweeping generalization. You are a person – a whole person. You are a three-dimensional being with foibles and strengths and plusses and minuses. You are complex. You contain multitudes.

Because, as they say in Alcoholics Anonymous, “What other people think of me is none of my business.” And, really, it’s not. If other people want to believe untruths, let them. You know differently. I know differently. We know who we are and that’s what matters. Everything else can just be seen for what it is: petty smallness that should be put in the circular file where it belongs.

Video About Internalizing What Others Think of Bipolar

I have been told to my face that I did something weird. There was a toxic person at a table with me. She said something that agitated me and In a dramatic voice I imitated this toxic person.
Needless to say I ended the friendship with the person who said I did a weird thing. She knew I was bipolar and I m guessing she may have assumed what I had done was due to my bipolar.

... education, socioeconomic, and environmental factors etc can also deeply affect a person wellbeing and other's perception of them as well. People with a mental illness are often at a disadvantage
It's a given that not everyone will like you in this life for whatever reason, bipolar or not, depending on what the other persons particular value system is or their place in life
We are all stuggling with something... All you can reasonably be expected to do is your best with the hand you are given. If people don't like you, consider it their loss, move on and find someone else who does
I also wanted to add that while not everyone necessarily needs medication, depending on the severity of their illness many could benefit from cognitive behaviour therapy or other appropriate therapies. How we think also affects our behaviour. Ultimately our behaviour affects the way we are perceived by others

I get what you're saying. Over generalizing any group of people is unfair and not necessarily accurate. Many different factors go into making a person who they are
But you also have to remember that by it's very definition bipolar disorder is a mood disorder so it goes without saying that unmedicated people with bipolar fall outside the normal relm of moodiness. Moods often affect peoples behaviour (as does alcohol or even lack of sleep). Depending where a person falls on the spectrum of bipolar they can be be up or down, manic or depressed when untreated. Of course individual personalities can also come into play but that a whole different story.
It does a real disservice to people who have bipolar and are seeking treatment through medication and therapy to group them with those who aren't
Happy birthday by the way...