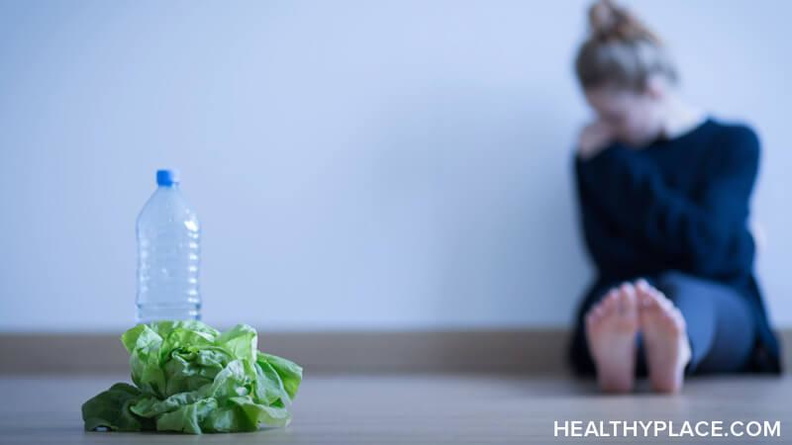 I remember my darkest moments last spring. I would wake up feeling very alone, even though my husband was right next to me. I often prayed that I would die that day so I wouldn't have to feel so bad. I was at my lowest weight, and felt little hope. I didn't want to face the world, and I often would make plans with friends only to cancel at the last minute because I found it too hard to be around people.

First comes the secrecy. After all, you aren't typically going to tell your spouse or loved ones that you have cut your calories down to the amount that wouldn't keep a small toddler alive or that you are throwing up your food several times a day. You aren't going to say that you need to make the rounds of fast food places when you are stuck in a binge/purge cycle.

You make excuses. You aren't hungry. You just ate. You are holding out for a special dinner/dessert/treat that never comes. You are too busy.

This shroud of secrecy weaves a barrier between you and your loved ones and friends. They begin to notice that you often turn down invitations to events in which food is served. Then one day, they simply stop asking you to come along.

I remember last fall when a group of friends when to the local wine and hors d'oeuvres walk held every year. I wasn't invited, even though I had gone with them before. I later was told they didn't think I would be interested because of the food.

That hurt. By nature, I am a outgoing person who likes to be around friends and family. But I also could understand why I wasn't invited. I had spent years either turning down invitations or picking at my food during social events.

The loneliness soon becomes part of your life. Everyone else is out having a good time, and you are at home with your eating disorder. And the cycle become hard to break.

It was still hard when I first started recovery and wanted to re-integrate into life. Some people were no longer there. Other people felt awkward around me if food was involved. I certainly couldn't announce to anyone at a party or other social event that I was in recovery from anorexia. (Try that as a conversation-stopper sometime. It just isn't the same as saying you are recovering from breast cancer or some other illness people automatically sympathize with.)

I still struggle with loneliness, although I have a core group of friends that I talk to and go out with. I still want to isolate myself, because it has become an ingrained habit even though I now am eating normally.

I would just say to those of you who have loved ones with an eating disorder to remember that a part of them still wants to be part of life. Please don't forget them. They could be feeling lonely and need you.

And I would encourage each person with an eating disorder to try very hard not isolate yourselves. Try to take part in social events as your comfort level will let you. At the bare minimum, keep in phone contact with friends and family so you feel less lonely. Finally, know as you get better you will return to full life. It just takes time.

The Summertime Blues: Navigating Eating Disorder Triggers Redux
What's So Important About Being Pretty, Anyway?" - Video
Suunie
May, 6 2013 at 2:00 pm

i was always alone because even if i was so skinny boned, i was always eating 3 meals a day - big meals. low caloric food it can last a meal for 3 hours so i had less calories i was enjoying my food i was more enjoying eating alone then be with my friends so i dont see them this is sad eating makes me happy because more than be with others ...

thank you angela...ashleyy i loved your openness honesty and senstive nature which shone through your comment..sometimes online support can break the silence and lonliness of recovery,fill time with what you enjoy..company i find can come in the from of a good funny movie, a good book, visiting little quirky shops, i like angel shops and card shops...going to the library...recovery is about getting to know and respect your personality, and learn to nourish your love of life...thinking of u and sending you a friendly word of hope..

NIcola, I just wanted to tell you that you are never alone and you can recapture the life you had. I am often scared and lost, too. Sometimes I still have to make myself get out and do things with people.
Ashleyy, that's what eating disorders do to us - make us feel disconnected from others. I hope you go into therapy or get some other kind of help if you slipping into relapse. Tell that negative voice to shut up and know that people do want to hear what you have to say. Don't believe that voice!
Grace, you are very wise -We are all children of God and need to help each other. Thanks for reminding me (and others) of that!

I've always been a bit of an anti-social person, but when my eating disorder took over I became even more so. If it wouldn't have been for my boyfriend, I would have likley gone weeks at a time without seeing anyone.
Even when I had a taste of recovery, and now that I am slipping into relapse, I sometimes feel my lonliness even more acutely when out in a crowd, or even at a smaller gathering. I often feel intimidated by everyone, like they are so much more worthwhile and interesting than I am. I feel a disconect because I feel on a whole other level than other people (not in a good way - I feel like they are all so much better than me, so why would they want to be around me or hear anything i have to say?). Even when I let my guard down and become more outgoing, like my normal self, i hear a voice in my head telling me to shut up, that no one likes me or wants to hear what i have to say. This makes staying at home alone even more appealing, although it only perpetuates the cycle, because if i'm home alone, i'm likley bingeing and purging.

this really resonates with me and is exactly where i find myself..lonely and sad...im single , no job, friends exist only online or through a text message on phone and i wonder why my life turned out this way i too was so bubbly , full of life, people enjoyed been around me..now i spend every moment alone, lost and scared

I used to smoke and eat a lot, and especially, drink lots of diet soda and chain smoke to deal with lonliness and moreso boredom. I ballooned from 120lbs to 190lbs when I also came to have a very serious mental illness (called schizophrenia). But now I'm doing better stable on Abilify, which I take religiously. The weight is something that still needs work. Having quit smoking as of April 1st, 20011, I feel my lungs are now ready to try a slow and long jogging, often, into my weekly schedule. But I also now have a computer, and the boredom has really taken a turn for the better. Fat people like me are often very bright (I dunno how much so I am myself), but we need to be their friends. We are all children of God, not just the "normal" folk; Skinny or fat, let's take the time to help one another. Peace.