Hope in eating disorder recovery is a vital key to success (Hope – the Foundation of Mental Health Recovery). Without hope, we have nothing to look forward to but a life tortured by our eating disordered voice and patterns. We have day after day of a cruel, incessant voice in our ears about what failures we are. Hope, even if just a sliver, is like a thin whisper of smoke over the mountains when you’re wandering alone in the forest. That smoke says, “If I can just make it there, over the mountain stretch, there’s a place waiting for me by the fire.” So how do we raise our heads and see the thin veil of smoke as we wander? How do we keep hold of hope in eating disorder recovery?

When I Didn't Have Hope in Eating Disorder Recovery

When I was younger, I felt as though I was alone and wandering in a deep, dark forest of my eating disorder from which I might never escape. I remember that song that said, “Despite all my rage I am still just a rat in a cage.”

I remember thinking about that sentence in relation to my eating disorder. I remember thinking that I felt trapped and no matter what I did, or how I badly I felt, escape from the cage of the eating disorder wasn’t possible. At the end of the day, I was still just a rat in a cage. I felt stuck, and the longer I felt stuck, the more I felt hopeless (You Think There’s Only Darkness, Hopelessness: You Are Wrong).

Hope in Eating Disorder Recovery -- The Hope of Rest

This weekend I heard of an experiment conducted with rats. In this experiment, they had two buckets of water with a rat swimming in each one. The rat in the first bucket was sporadically picked up by the researchers to get a moment's rest from the incessant swimming. It was out of the water for a few moments and then placed back in the water. The rat in the second bucket got no such rest. What this sad experiment found was that rat in bucket two, the one that got no rest, drowned in an hour. The rat in bucket one, however, the one who was given moments of rest, was able to swim for 24 hours.

The difference was that the rat in bucket one had hope. That little rat was given moments of rest and those small moments were enough to keep it going.

The Sliver of Hope in Eating Disorder Recovery 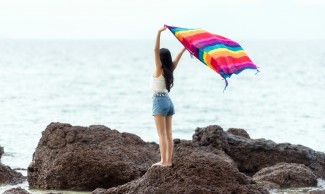 I thought about this in the context of eating disorders and addictions. I remembered how terrified I was years ago as I voluntarily checked into the eating disorder hospital. I remember writing in my journal, “I don’t think I can recover but I’m hoping I can prove myself wrong.”

The key was that I had a sliver of hope for my eating disorder recovery. I had moments, even if they were only seconds of each day, that I felt free. For a brief respite, I forgot that I was the shameful woman who couldn’t stop destroying myself and my relationships. I had flickers of moments that I wanted to see in flames. I wanted desperately to be happy and free. Yet, back then, I honestly didn’t think it was possible. But I hoped I'd prove myself wrong.

This season, as you’re surrounded by friends and family, by food, and travel, and maybe even stress and loneliness, be aware of those thin veils of smoke over the mountain. Often we don’t let ourselves hope for recovery because we’ve failed so many times before. Still, let yourself hope. Let yourself dream of a day that you’re free and happy. Hold that vision over the mountain as you walk through the forest of your eating disorder recovery. If you keep walking, step-by-step, eventually you will get there. If you keep going you can get there.

Check Out this Video on Holding Hope in Eating Disorder Recovery

How to Talk to Someone with Disordered Eating Around the Holidays
How to Set a New Year’s Resolution with an Eating Disorder
NoahDylan
December, 15 2016 at 11:15 am

I really believe we should never give up hope. Without hope, we don’t try, and if we don’t try we’ll never get anywhere.

Thanks Noah. I liked how it is really that simple - when we have hope, we try and when we try, we can get better. Thank you.