My Experience With Mental Health Stigma

Surviving a psychiatric crisis is one thing. Overcoming one is something completely different.

About eleven years ago, I was hospitalized in a highly secure psychiatric hospital for drug-induced psychosis. Not one of those fancy, new age psychiatric hospitals either. It was the type that sat on top of an ominous hill on the outskirts of town. The type that spawned hundreds of urban legends about town about the ‘people on the hill.’ The type that hadn’t been painted in fifty years and reeked of death, urine and incarceration. An asylum, essentially.

I had been abusing and selling Ecstasy, or MDMA in epic proportions. I was high all the time, which made it very difficult to notice that mania was enveloping me from within. In only a matter of a month, I was paranoid, extremely delusional, quick tempered and violent; for the first time in my life.

I was forcefully brought by police to the ER on multiple occasions, but somehow kept on talking myself out of being admitted. But once I was too psychotic and out of control to even keep it together long enough to talk to an ER psychiatrist, I was tossed inside and the metaphorical key was thrown away.

Locked Up and Livid

In only a matter of days, I became increasingly violent. I would attack staff, I would attack other patients. I would just simply attack anyone who got in my way and especially those who I blamed for my unjust incarceration.

I spent a good part of my stay in the "Bubble Room". Although the name sounds a little whimsical, it was nothing of the sort. It was a cold, hard, barren room with nothing but an inch thick mattress on the floor. There was a shatterproof bubble on the side of the room that allowed nurses to stick their heads inside to make sure you were still alive.

The man that went into the bubble room and the man who came out four months later, were far removed from one another. My sanity was gone. My personality was gone. I had done things I never thought I would do. I terrified people, and I terrified myself. 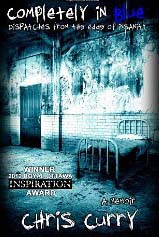 When I eventually got out, I truly began to understand what mental health stigma meant.

Being from a relatively small town, and being the extremely eccentric resident ‘crazy guy’ for a month until I was hospitalized, it was hard to escape stigma. I had made quite the name for myself staying up for weeks at a time and causing havoc in every nook and cranny of the city. I was taken away forcefully from the newspaper office, the University, the radio station, some bars and a few of the local high schools. If you didn’t witness my reign of insanity first hand, you undoubtedly knew someone who had and definitely had heard of ‘Crazy Chris.’

The Crushing Sound of Psychiatric Silence

I moved out of the city and entered my psychiatric turtle shell, to only emerge a decade later. No one I met ever heard about my hospitalization. I wouldn’t tell girls I was dating and wouldn’t tell people that I considered great friends.

But something has changed in the past ten years. Maybe it’s because the world is becoming less stigmatizing towards people with mental health problems, or maybe it’s because I now work in the field. Either way, the battle has just begun.

Fear, False Beliefs and Blame in Mental Health Stigma
How Long Can Someone Be Punished for Having a Mental Illness?
Linda Baron Katz
May, 29 2012 at 6:19 am

I liked your blog a lot. I think the change is both. Although there is still a lot of stigma it is changing. People are more aware about mental illness than ever before and I think it takes someone like you and myself who is working in the mental health sector to educate people in order to let go of the stigma that is around us.

This is very true. It's a long battle ahead but we are definitely making headway. Keep up the good work!

Definitively, stigma to mental disorder indicates a great and impassable impediment in adequate treatment of person with mental problems everywhere and any time. Even, it was make epochal achievement in neuroscience research, it remain many trivial and primitive attitude toward mental health service, as well as to psychiatric patient. Your upsetting experience, Mr.Curry, confirms this ascertainment. Without an essential and functional antistigma campaign, in international dimensions, it isn't possible to solve the ignorant and scornful view of public at psychiatric patient that should to return in their natural life milieu, as current intention. I would to stress the fact that an appropriate treatment of any psychiatric patient promises that the same could be a functional and useful member of its social network.

So glad that you came out of your psychiatric turtle shell to bravely share your story Chris. Thank you
Hugs & Love Lee

Thank you for the kind words Lee. All the best