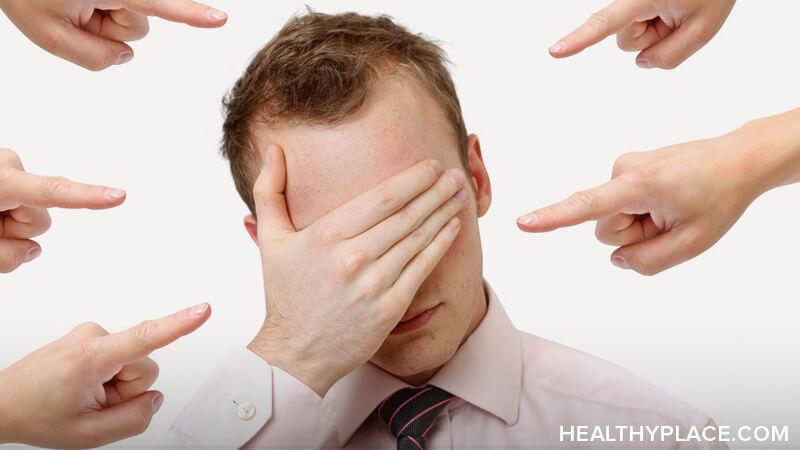 Using mental illnesses as insults is invalidating and harmful. These days, it’s hard to go far without coming across the topic of mental health and mental illness. Considering it’s still such a taboo subject that people shy away from, this seems like something we should be rejoicing over as advocates and activists — and I would, but for the fact that it’s still being spoken of in negative, stigmatizing words. Although people are mentioning mental illness seemingly more and more, all it’s doing it adding to the already existing stigma since mental illness is being used to insult people.

Slinging around mental illness like a weapon or an insult is not trying to explain why someone is behaving or thinking the way he is, or to trying to help, it’s trying to shut him down and shut him up. It's trying to invalidate what's being said, to verbally abuse someone into submission.

In conversations lately, especially over politics, mental illness is being used as an insult and a synonym for dangerous, reckless, and wrong, and that’s not okay. Just because you disagree with someone, it doesn’t mean he’s any of those things anyway, and if you think he is any of those things, just say so.

This is particularly true for the President of the United States right now — many are balking at his decisions, seeing them as irrational and threatening, so they’re trying to figure out what mental illness could be causing it (Stop Speculating on President Donald Trump's Mental Health). The problem is we don’t know if he does actually have a mental illness, so to continue to speculate about it only serves to further the stigma that mental illnesses and those who have them are dangerous. Perhaps he just has dangerous ideas, and until we know one way or the other, we should just be addressing that instead. Even if it does turn out he has a mental illness, it still shouldn’t be used as a weapon or insult.

Likewise, supporters of the President are flinging mental illness accusations in that invalidating way right back at those speaking out against him. This needs to stop.

As I’ve written before, mental illness sometimes does play a part in some pretty heinous things (How Does Mental Illness Affect Criminal Behaviour?). As I also mentioned in that same blog post, we need to properly predicate those kinds of discussions with as much information as we can to avoid the stigma that is created from passing comments.

I think to fairly talk about it, we need to be able to accurately pinpoint the cause and effect relationship between the mental illness and a person’s actions because when we don’t, we’re left with blanket statements, such as mental illness equals being dangerously unstable. People seem to forget that with mental illness, people take statements directed at one person and apply them to all.

How to Stop People from Using Mental Illness as an Insult

I have two simple recommendations to counter the problem of mental illnesses being used as insults.

Stigma is continuing to rear its ugly head, perhaps more than it has in a while, but we’re not helpless against it.

How We Ask About a Person's Mental Illness Matters
How to Stop Dehumanizing People with Addiction
Tasbih Al Alim
July, 3 2019 at 7:02 pm

Perception puts the ill in illusory.
Think before you think. Heh.
Morality puts the real in realizing.
Sincerity is the best therapy. Capisce?
Sincerely saying you're sorry is true therapy.
Repenting is therapy.
See the reality?!
Istiadha..

To be honest, telling a normal person that he or she has a condition might just be a reflection (or a hasty description) of a person's behaviour, rather than being derogatory to the disabled. Here I also encourage those with mental problems to seek help asap. Prolonging the problem never helps anyone. Get well soon.

I see what you’re saying, but there’s a difference between telling and insulting. There are many instances where it’s very clear that someone’s not just trying to describe how a person is behaving, but is rather using it to tear that person down. That’s what I’m focusing on in this blog. I do second your recommendation though of people seeking help. It’s an important step in recovery.

See it their way is no healthier than see it your way.
Perception puts the ill in illusory.
Exactly the freakin point. Exactly.
Unfair mind is worse than mental illness.
Fair mind, fair respect is the reality of mental health! Istiadha..

This is a big one. We have to be more mindful of our language. How we are using it, what we're actually saying with it. Throwing around mental illness terms as insults simply must stop. The newer piece of this, using mental illness as a blame or reason, for generally "bad" behavior is not helpful to anyone. Unless we are clear that a mental illness is causing behavior to speculate about it only puts those who really live with it in a horribly stigmatized place.