What Does Standing Up for Mental Health Really Mean?

By now, I would hope that you all have heard about the Stand Up for Mental Health campaign that is running here on HealthyPlace. But, what do we really mean when we say ‘stand up’ and what can you do today to make this project a success? 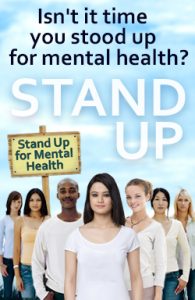 The idea behind the campaign is that if more people ‘stood up’ and publicly acknowledged their battle with mental illness, the shame behind it would diminish. After all, 46 million Americans suffer but I would wager only a small percentage of that number are actually public about their mental illness.

Let's Get Down to Business

Now let’s get down to the nuts and bolts about what ‘standing up’ really means.

I came out of the mental health closet just over a year ago. I did so in a somewhat fantastical way that most people would likely not be comfortable with. I wrote and published a memoir detailing my struggle with depression, addiction and drug-induced mania and psychosis. I also started writing this very blog that often goes into personal detail surrounding my battles in mental health.

Two years ago, barely anyone but my family knew about my struggles. Now, nearly everyone I talk to knows all the nitty-gritty details. And I have yet to experience a single negative consequence because of it.

You Don't Have to Scream It From the Rooftops

Not everyone is going to write a book and blog about their struggles. But standing up doesn’t need to be that elaborate. It can be as simple as changing your Facebook status to ‘I have struggled with depression, anxiety, bipolar disorder, schizophrenia . . . and I am talking about it.’ It can be letting your co-workers know that the last bout of the flu was actually a bout of depression. Or even just talking to your friends in more detail about what you’ve experienced.

So if you’re hiding in the shadows, it’s time to come out. Talk openly, talk honestly but most importantly, just talk.

Tags: stand up coming out

APA Reference
Curry, C. (2013, February 4). What Does Standing Up for Mental Health Really Mean?, HealthyPlace. Retrieved on 2021, October 19 from https://www.healthyplace.com/blogs/survivingmentalhealthstigma/2013/02/what-does-standing-up-really-mean

Remembering the Forgotten: Your Response to Dementia
The Self Fulfilling Stigma
Dr Musli Ferati
February, 12 2013 at 10:35 am

I greeting the initiative of Healthy Place to promote and to actuate mental health issue through genuine experience of mentally ill patients. This hopeful project, on the other hand, will contribute to grow up the awarness on mental disorders as primary hendicap of the current human race. Beside this acquisition, over original declaration of psychiatric patients on their dealing with their mental illness, the psychiatrist would discover and enrich the secrets of psychiatric entities as well. As the main accomplishment of this initiative would be the struggle against stigma of mental pathology with many stubornly and primitive attitudes on mental health care system. Therefore, the substantial understanding of mental health exhibits greats perspectives on efficient psychiatric treatment of mental disorders all over the world.