It's Okay to Get Mad About Mental Health Stigma 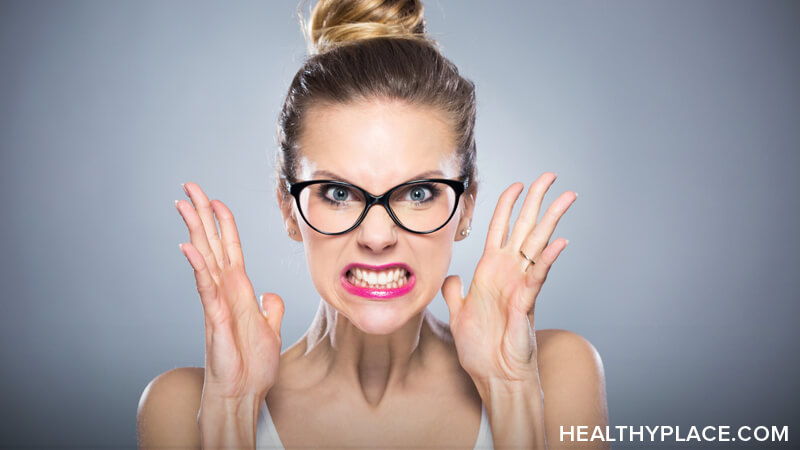 It's perhaps an odd thing to say, but it's okay to get mad about mental health stigma. The reason I wanted to broach this discussion at all is because I know many, myself included, often talk about being calm and collected when it comes to stigma. After something that happened recently, I wanted to say it's also okay to be made when stigma for mental health is perpetuated.

Recently, I got angry about a dismissive comment about mental health struggles. So angry, in fact, that it derailed (and has temporarily postponed) the blog post I was working on for this week. It felt important to talk about this anger response to mental health stigma.

Without going into too much detail about the exact circumstances, I heard someone refer to someone's mental health struggles as a "pat on the back condition." Immediately, I was fired up. What an incredibly dismissive thing to say about mental health struggles and mental illness. It gave me the impression of interpreting someone's struggles as being simple drama and someone else responding "there, there" while patting the person on the back in a condescending way. Honestly, I'm still angry about this.

It reminds me of an article I read back in 2012 from Time magazine's website. The author was writing about the coming changes to the Diagnostic and Statistical Manual of Mental Disorders, Fifth Edition (DSM-5), which was to be published in 2013. The premise of the article seemed to be to discredit the additions in the DSM-5, including excoriation (skin-picking) disorder, which the author dismissed as a "reality-show problem."1 As someone with that disorder, I was incensed.

Getting Through Anger Toward Mental Health Stigma

The difference between that situation from 2012 and this one from 2021 is in how I handled it. Getting through anger when faced with mental health stigma can be a challenge ("How to Control Your Anger"), and the way I outwardly reacted to the stigma then and the stigma now isn't quite the same.

When I read the article in 2012 claiming that my disorder was a "reality-show problem," I immediately reacted as if it were a personal attack. I rushed over to my Tumblr blog and wrote many entries about it; I wrote a letter to Time; I wrote the magazine on social media to demand accountability, and I even tweeted at the author of the article. Considering the article is still up to this day and I never, ever got a response, I'm sure you can see how that all worked out.

That's not to say I didn't vent my anger about the "pat of the back condition" comment. I ranted to a few people about it and, clearly, am writing this blog post. What I didn't do, however, was go after the person who said it. At this point, I haven't addressed it with that person at all, part of which is because I'm still angry.

Not every situation is built for combatting mental health stigma, and for me, that includes when I'm really mad about it. For me, going at stigma and the people who perpetuate it from a place of anger isn't a good way to approach dismantling stigma because I'm so focused on being angry that it doesn't become an educational moment anymore.

We shouldn't deny the angry part of our reactions because it's completely valid. However, I think it's also important to consider the role and impact the anger plays in how we address mental health stigma. In short, it's okay to be mad about mental health stigma, but be mindful of how that anger is used.

APA Reference
Barton, L. (2021, April 5). It's Okay to Get Mad About Mental Health Stigma, HealthyPlace. Retrieved on 2023, February 8 from https://www.healthyplace.com/blogs/survivingmentalhealthstigma/2021/4/its-okay-to-get-mad-about-mental-health-stigma