PTSD Stigma: Why People with PTSD Can't 'Just Get Over It' 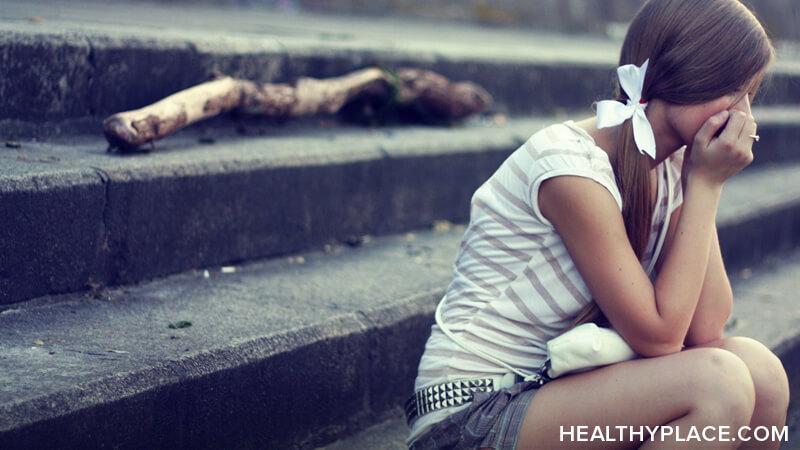 Posttraumatic stress disorder (PTSD) stigma is alive and well. If you have PTSD, you've probably heard someone tell you to "just get over" your trauma. Maybe it was a well-meaning friend or family member, like my father who was frightened by my suicidal ideations. Or maybe it was a less well-meaning stranger, like the rude New Yorker who recently commented on my blog telling me to, "Grow up and take responsibility for [my] life." Whether the statement comes from a place of love or PTSD stigma, it doesn't make sense. Here's why.

The PTSD stigma that says we should "just get over trauma" ignores three key facts about PTSD and PTSD symptoms.

The Trauma that Caused PTSD Doesn't Stay in the Past: It Exists in the Present

When people "get over" upsetting events, it's usually due to the passage of time. Take a breakup, for example. When a relationship ends, there is typically a period of grieving which may involve crying, talking to friends, getting a makeover, or having a rebound. These common post-breakup activities represent rituals that we use to process the event in the context of a cohesive temporal passage. But trauma is not the same as a breakup (PTSD Causes: Causes of Posttraumatic Stress Disorder).

While doing research on PTSD, I had the opportunity to speak with Bessel van der Kolk, a renowned trauma specialist who authored The Body Keeps The Score. One of the first statements he made during our call was that trauma is:

"not a story about the past. It's about how the past continues to live in your body . . . you're in a constant state of heartbreak and gutwrench."

I don't think there's a better way to describe PTSD.

For those of us who have undergone or witnessed a severe, life-threatening or sexual trauma, that experience becomes trapped in our minds and our bodies. Even when we are unable to clearly remember the details of the event during the everyday, we can suddenly become transported to that moment as though it is taking place once again. Trauma doesn't feel like something that happened a long time ago. It feels like it's just happened, or is still happening. How does a person get over something that is still going on?

For people who experienced trauma during childhood, there may be an added component of neurological damage that affects memory and emotional regulation.1 Even before this relatively recent biological discovery, psychology has long recognized the phenomenon of arrested emotional development, which is associated both with early trauma and early drug use. Essentially, someone who experiences a disruptive event during a time period when she is still maturing can become emotionally arrested at that age.

If someone is emotionally stuck at an earlier developmental stage than his physical age, he is likely to exhibit behaviors that others might find odd or immature. It doesn't mean that everything he says or does will sound like a 10-year-old. This is not an intellectual deficit. It does, however, mean that someone who experienced trauma at age 10 might respond to disappointment by raging or "throwing a tantrum" due to emotional stunting. This can also manifest in less obvious ways, like an under-developed perspective on the world, often labeled as "black-and-white thinking."

For people who experienced childhood and early adolescent trauma, moving past the event includes the added difficulty of correcting emotional stunting that likely results from neurological changes. That is no easy feat. It's certainly not reasonable to expect that person to magically get better if you tell him to "just get over it."

The Trauma that Causes PTSD Is Extreme

Finally, you need to remember that if someone has PTSD, she has experienced an event so extreme it disrupts her cohesive life experience.2 Traumatic events are so affecting because they fall radically beyond the expected human experience. They cause people to make illogical connections, such as between success and danger. If you have never experienced an event that makes you question the very nature of reality, then you simply cannot understand what it's like to be traumatized. Which is wonderful--but don't expect that a person who is traumatized will share your perspective of time, reality, and social conventions.

Complex PTSD and Perfectionism
The Impact of PTSD on Your Sex Drive
emmy
March, 28 2020 at 9:02 pm

Before reading this I was loathing in self hatred for not being able to stop crying from an attack. I was diagnosed at the age of 15 with ptsd and ever since have felt like i'm not "deserving" of the diagnosis because as a society we are taught that ptsd are for veterans or survivors you hear about on the news, but being accepted, especially by yourself, is a step to recovery. This helped my night plentiful, thank you!

suffering PTSD is hard, no one understands and everyone keeps telling me to just get over! well i can't, i can't do anything anymore. its horrible when people make rude and offensive comments about mental health, people need to understand that mental illness is a real thing and that its not easy struggling everyday knowing that something will happen. and i live in fear and i struggle big time. i force myself to do things. i was abused physically at the age of 7, it was s*xual assult and r*ped from my brothers. now im home 5 days a week and 2 days somewhere else sorting out my head and my life. i feel so messed up, i can't do much and i always feel confused, i don't understand myself or anything that happens. i get very bad flashbacks and i loose so much sleep, its a hard life to live. as many times as i tried to kill myself i could never be quiet successful, because people never know when to stop. people need to know boundaries of things ti say and do. but they don't. if people who don't have PTSD, Depression, Anxiety or Anger Issues don't understand the pain or hurt we suffer. everyone keeps telling me to get over it. why do you keep saying that to me?

I just kind of happened upon you by a google search and read, then kept reading and was so interested to see the mention of Complex PTSD.
My therapist told me about a month ago what Complex PTSD is and she believes that I have it. She explained that until it became listed that she cannot put a name to what I have....then she explained all of the things we have discussed for so long and why it fits me....I have been struggling with the abandon everyone toxic theory, when people are clueless about another person’s life. Do you think being an overly sensitive person makes others view one as “ toxic, no fun to be around, always a “ downer” etc. I think that, that being an overly sensitive people and also perhaps, someone who doesn’t think everything in life can be made light of.... I think that.... I am very glad that I happened upon your blog, thank you

Maribel, if you are in crisis, please reach out for help. Here is one option:
Crisis Text Line is free, 24/7 support for those in crisis. Text 741741 from anywhere in the US to text with a trained Crisis Counselor. Crisis Text Line trains volunteers to support people in crisis and can direct you to other available resources.

I'm sorry that you had to deal with so many dismissive therapists. It's a real problem that I think is often overlooked; we're taught to believe what medical or psychological professionals say without question. That's not always right. I'm glad you finally found someone who is willing to listen compassionately and help you.

Hello, I enjoyed your article but I would really appreciate if you would include complex PTSD as we experience the same relived trauma do to prolonged physical, sexual, verbal or emotional abuse. Implicit memory is activated in the same way in CPTSD - it’s not only created through single events. Thanks

Hi Sara, thanks for your comment and glad you enjoyed the article. My abuse was also not the result of a single event but rather a period of prolonged physical, sexual and verbal abuse that began as a young teenager and was preceded and followed by other singular traumatic incidents. Once CPTSD becomes an official diagnosis, I will probably meet the criteria for it. As it stands currently, however, CPTSD is not recognized as a clinical diagnosis, which is why I’m not using the term—but you’re right that neither PTSD that results from singular events or prolonged abuse can be just “gotten over” the way some people seem to believe. I hope that CPTSD is recognized by the APA and WHO soon, but until it is you can definitely read my articles on PTSD to be inclusive of all types of trauma (unless otherwise specified), not just that which results from a single traumatic event.

I'm so tired of trauma and trying to get anyone to understand that I see their point of view but mine is very different. 23 years of serve abuse and no help or understanding available mirrors the original traumas. I don't know why we have to educate other people they should education themselves or get lost as far as I'm concerned now. It's so exhausting

So. Exhausting. I got to the point during the trauma when I *HAD* escaped and was able to get into town with other people besides my abuser to 'help' me...by the first couple of times of trying to get help and trying to explain what unbelievable circumstance I was in and after *I* realized "Yes. THIS is really happening. There is a 'person' out there that not only will but DOES 'This'."....my patience and lack of sleep and food and mental stability was SO disrupted I just screamed and flipped out on the police, EMS, Hospital staff, social workers blah blah ...
I swear the repetitiveness of it and effort trying to get ANYONE to even remotely understand the degree of which I needed help, kind of help and ugh the "why?"....omg it was just like talking in circles while my abuser was INCESSANTLY gaslighting me, exhaust me and make me MORE disoriented and isolated.
I can logically rememeber now that *I* litterally was unable to conceive the first week of the abuse and I try to remember that but...it really is a horrible catch 22.