Anxiety Denied Is Not Anxiety Extinguished

Fear denied, repressed, suppressed, or put out of mind is not fear extinguished.

Treating anxiety: 'as if'

I've been told that acting 'as if' I'm not nearly as anxious as I am is a helpful thing. It's also dangerous. As with almost any technique sometimes is fine but if you're anything like me and you'll do whatever you have to do to be able to put your anxiety aside and function, and if what you want is to go on with as much of life as you can, uninterrupted by fear, then it can become destabilizing.

I minimize the impact the anxiety, the PTSD, has had on my life, still has in my life. In my head at least. So I think unless you treat that tendency to dismiss the anxiety before you go ahead and act 'as if' you're OK anyway then you're setting yourself up for some difficult times ahead.
The issue being that you might not fail at this acting gig but then you're stuck in a situation where your real emotions -including the anxiety- are so far off you don't really know what they are. That's like opening the door for depression and inviting it in for a cup o' Joe.
Things might seem alright, on the surface but like I said, fear denied is not fear extinguished. 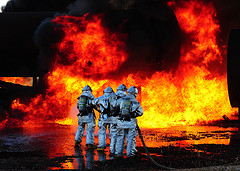 My goal here really is to not be afraid anymore, no matter how deep and far I may be able to bury the fears, no matter how well I could cover them up and get on with things and nobody would know it wasn't the real thing and I wasn't peachy. Nobody except me. Often as I minimize the realities of anxiety, and much as my self-esteem has had more than a few hard knocks, I know I want to feel well within myself way more than I want to feel 'as if'. Because 'as if' is alone, and 'as if' is pretty lonely.

Being told to be less real seems like a bad plan to me. Especially when you spend a significant portion of your waking life stuck in loops of time past, or derealized, scattered, confused, frightened, paranoid, lost and certainly alone enough already.

In any event, whilst 'as if' can be useful in the moment -if it's a particularly tough moment and you do just have to get through it whatever way you can, in as functional a seeming fashion as possible. And whilst that's great, useful, it also needs a time limit. It needs to come with a big caveat because it really isn't a good idea to rely on 'as if'.

These stop gap measures are meant to be options in a repertoire of tools to manage anxiety. But when you're flip-flopping between Coping Skills 317 and OMG Get Me Out of Here 102, the whole repertoire thing is more just theory.

Hi Kate,
Thanks for this article. I agree that acting 'as if' can be harmful if it leads to a denial of feelings. Facing feelings is incredibly important for anxiety sufferers.
I also wonder if making a lack of anxiety the goal could also create problems.
A third alternative could be to 'ride' the anxiety. Not deny it, but view it as energy and adrenalin that can assist in achieving whatever the challenge is.
Learning not to fear my anxiety, not to react to it with more anxiety - to tell myself it's okay to be frightened and not to automatically stifle my fear - that's what I'm aiming for.
Of course the anxiety would have to be at a manageable level to do this. Getting the anxiety level down enough so it can be tolerated is a challenge in itself, requiring many tools.

Well done Kate! I always knew your impact on the world would be great! Jean will be proud too!!
Take care,
Bunny.