Granted, now that I'm away from the verbal and emotional abuse barrage of yesterday, the thoughts are not as detrimental to my Self as they once were. At least now, when I have an AHA! moment, it reflects more "what he did" than "how bad of a person I must be". I am grateful for that.

I take responsibility for my horrid words, spoken from the corner into which he pushed me, and vow to never allow myself to be in that corner again. I've forgiven myself. I think that is the main reason my thoughts have turned from blame to understanding. 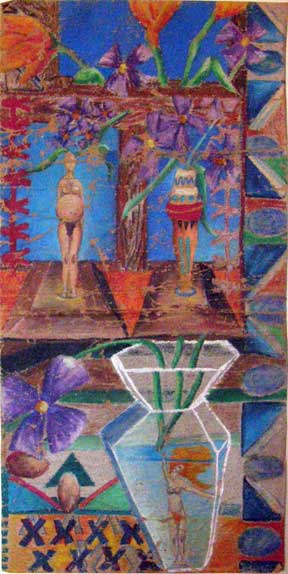 I drew the picture you see here soon after I married my husband. It reflects pregnancy and children, flowers and fertility. I wanted to be a mom, but not because I wanted to be a mother. The child was an afterthought to the idea that my husband would have to respect me if I was a mom.

He told me military women were no good, but he adored his mother. She was an embodied goddess to hear him speak of her. He implied that if I were more like his mother then he would worship me, too.

I jumped on that bandwagon without a second thought. Worship sounded a whole lot better than what he was giving me - verbal abuse, emotional withholding, sexual inconsideration, and all the rest.

I really didn't think that one through. But my subconscious did, and it tried to warn me.

Consciously I drew a celebration of motherhood. Subconsciously, I told a true and accurate story of not only the abuse I currently endured, but a picture of what was to come.

Let's break it down.

What My Subconscious Knew

She represents the charming way he implanted false beliefs and promises into my mind. She is naked and proud of her role as mother, yet she is faceless. She is only a mother. She has no other identity.

"Mother" serves to prove his role as father only. Abusers do not give importance to who you are only to what you do for them. That's why we pretend to be a happy family in public - it serves the abuser. He trains us to behave that way so his world appears perfect.

The vase represents the shell I would wrap myself within in order to hide from his abuses. I played his game for a long time. I pretended to be someone I wasn't so he might love me more. I forced myself into the roles he specified, whether I liked them or not...whether I liked me or not.

And all the while, the ideas he implanted in my mind flourish over my own.

When I drew her, I thought she was the water giving life to the flowers. I now know she is drowning in the water, holding on to the bit of life that exists in the cut flowers to sustain her. We all know every cut flower dies. The same will happen to her. She is dying whether she knows it or not.

Water symbolically represents emotions. She is drowning in emotions that have no where to go. That vase is solid. It's not going to spill or break. There is no outlet for what she feels. There's no communication (you can't talk underwater). She's alone. Isolation is key.

These simple, innocent images chill me to the bone. They foretell that he will treat our children as dolls. Dolls are and do what you want and only what you want. Our children, the most precious people in my lifetime, are (to him) nothing more than proof that he is a man.

He's already physically abused one of our sons. It's only a matter of time before our younger son "goes against" his father, too.

I dearly wish that you would pull out your current drawings, journal entries, and family photos. Look at them with an objective eye. Do you see evidence of abuse in your relationship? What is your subconscious telling you?

Please comment - let me know you are saving yourself.

Another point I can relate to - My x saw me only as a "woman" or as he said "the woman he married & wants a child with" / "I want a child with you (you = wife" not the woman I love") - He basically should have said "I married you (woman) in order to have a baby - How dare you refuse to give what is my right as a husband"
He never truly saw me as a person with an identity/personality because it didn't matter. All he wanted was a womb to bear his child so he could prove to the world he is a "man" and worship me as "the mother of his child". I refused to becoming a mother & when he realised I meant it - I no longer was a normal woman cos all normal people i.e. 100% of women in the world desire to be a mother only an evil/damaged woman chooses otherwise. So the emotional & mental abuse increased over time. He eventually walked out on me and straight away is looking for wife no.2 or should I say a willing womb (woman) to spread his seed (with the encouragement of his family who believe I am an abuser). "I love you" is just words used to manipulate you to give them what they want when coming out from the mouth of an abuser/narcissist.

I absolutely love your painting. I heard someone say once, "that picture moves me." I laughed so hard I thought I was going to pee. I had no idea what the person, who happens to be my sister, was talking about. I really do now. Your painting speaks to me. Because this is a mental health site i feel the need to say that the painting does not literally speak to me lol... I really like all the sharp angels. Do you sell your art?

I enjoyed your comment, Carrie. Thank you for the compliment and the giggle. I would sell my art if I had any left to sell. After 15 years of sitting in a leather portfolio, my paintings lost their luster. I took pictures of them before throwing them away. Now I express myself through writing and the occasional graphic image. But if I do get back to painting, I'll let you know.

Even after my last relationship, I do not with him. I can look at my emails, my texts, hear the voicemails, the few photos... there was no abuse there.
The relationship before that, yes. Emotional. I knew it at the time. I have confronted him on it. I also have told him never to do it to another woman again and I call him out on his actions often.
The abusive one: I see things all the time. I knew it was abusive the first time he hit me. I didn't have any AHAs until I looked at what he expected of me when I was still in Grad school our first year together: it was all a build up that I should have recognized. Now I know HOW to.

this scares me the most as i still live in denial ..my inner voices speaks bu my body is paralyzed to move out.
I justify my actions for the kids for the house
I understand how it feels..what i want to feel more than ever is that weight off my shoulder and freedom
COngratulations on your rebirth

ttt, I empathize with your position. Take it easy on yourself - you're just not ready to leave, and that is okay. The stress of thinking you "should" leave will cloud your ability to see clearly the things you can do to protect yourself while you stay.

I cannot believe the insight of this post. I thank God this post came when it did. You may be an angel. I have been out of abuse for a few years now. Just a few days ago, I wrote a few pages on my experience. I had to force myself to - I have been intensely wrestling with putting this past behind me. I have been wrestling with telling my story and facing the shame that it causes me.
I have made a career as a writer, but the past few years I have been paralyzed in my ability to express myself. What I wrote a few days ago was the first in a very long time. When the memory starts to fade and I wonder what happened - I can read it. It's shocking. I want to read it until it doesn't hurt me any more.
I cannot believe how well your painting displays the twisted dynamic of abuse! I went through something so similar and more abuse with others later on. I didn't understand how deeply the abuse programming had woven into my mind, so after a disturbing pattern developed, I knew I had to work at intensive de-programming. It has been years since I have even tried to date, but after several years of counseling and learning to find, as well as CREATE love (non-romantic love, of course) in my life, I truly have found a life of bliss! I am carefully considering the possibility of a new relationship.
Your final question about creative works that express my feelings was shocking when I considered my answer. To please my ex - the one who violently abused me on every level - I BURNED every notebook I had (15 years worth) in our firepit! I let him burn old photos from before I met him to PROVE that he was my one and only forever - the only one who mattered. The truth is, forsaking my past would never be enough.
He made sure to let me know about a month ago that he had made a baby with another woman (he was sure to let me know that she was also younger - rather than "old and bitter") while he was "working it out" with me. He didn't refer to her as wife, lover, girlfriend - but "woman I have a child with."
This comment reminds me of your story.
I'm so glad I left.