Abusive Relationship Feelings During the Routine

The victim, now a martyr of sorts in his or her mind, feels burnt out and overburdened by negative emotions. S/he can treat the abuser flippantly or with scorn because s/he feels the abuser tests him or her on purpose. Victims feels as if they are weighed down with the heavy burden of being a better person than the abuser, all the while losing control over their behavior. As the routine establishes itself in the relationship, the victim may seek help for depression or anxiety caused by having become someone s/he does not like, but not because of the abuse itself. 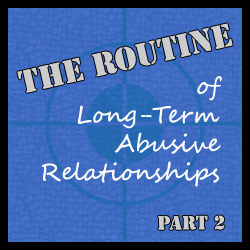 Simultaneously, the abuser feels that it may be necessary to hurt others to stay true to oneself. Abusers' feelings of self-centeredness provokes them to win every argument (or turn every conversation into an argument to win). Saying "I told you so!" and proving their righteousness becomes imperative to the abuser as being right equates to retaining power over their victim(s). Abusers might profess that they like who they are and see no reason to change. The problem is that the abuser's concept of who they are springs from fear and confusion; that state of altered reality allows them to abuse without admitting they do so. Therefore, the abuser does not feel as badly as the victim imagines them to feel. The abuser feels just fine and the victim's efforts to make the abuser happy adds to the abuser's confusion.

Abusive Relationship Behaviors During The Routine

The victim comes to find that they are to be the stable, responsible ones in the relationship. This often looks like caretaking (ensuring the abuser has all s/he wants at the right time) or perfectionism (distrust of others to do things the right way). Of course, right is defined by the abuser, not the victim. Victims of abuse use their behaviors in attempt to prove their worth to their partner, and in the process cement the idea of idealistic martyrdom in their mind.

During the routine, the victim may display abusive behaviors. Victims can find themselves behaving as badly as their partner, but embarrassment prevents them from acting this way outside of the home. Victims become experts at appearing to fine to the outside world because they behave as if they want the responsibilities their abuser refuses to accept. Unfortunately, taking on so many responsibilities (including acting as if they asked for all the responsibilities), acting like their abuser and martyring themselves in the name of love can lead abuse victims to substance abuse, emotional eating and fatigue in addition to mood disorders.

The routine allows the abuser to indulge in their self-centeredness and refuse to do anything s/he consider beneath his or her stature. The abuser may or may not take on mundane tasks like paying bills, washing laundry or mowing the grass. However, whatever tasks the abuser takes on will certainly match his or her self-concept, but may appear hypocritical to the victim, yet match an outsiders expectations exactly.

Abusers behave as if they have their cake and eat it too (because they do). Sometimes abusers brag about their partners to outsiders, but these backhanded compliments reveal the abusers' power over their partners more than the partners' skills. As a person of leisure (in essence, if not appearance), the abuser allows his or her feelings of entitlement to come out in behaviors such as belittling his or her partner, temper tantrums or pouting, depending on what works best to promote the abuser's public image.

Unfortunately, the tell-tale signs of abusive behavior take a back seat to the impression the abuser makes on outsiders. Usually, the community at large either admires or fears the abuser, and that is exactly as the abuser intends. If s/he creates a circle of admiration, then abusive behavior is dismissed as nonsensical. If the abuser creates a circle of fear, then no one wants to call the abuse upon themselves by speaking against the abuser. The abuser keeps the family emotionally isolated because the family knows everyone else thinks the abuser is either above reproach or are too afraid to do anything to help.

The routine gives abusers absolutely no reasons to change anything about their behavior because it works for them. The abuser is as happy as s/he could ever be. The victim deals with much more denial, anguish, suppressed hostility and other negative emotions than the abuser ever would. These undercurrents of discontent eventually force the victim into complete denial, complete acceptance or completely abandoning the relationship. No matter what the victim eventually does, the abuser will do whatever is necessary to gain and maintain complete control of his or her altered reality.

Long-Term Abusive Relationships: The Routine vs The Cycle of Violence
Can You Protect the Children from Domestic Abuse?
Laura Scheierman
December, 7 2014 at 12:11 am

I left my 6 year marriage this past September. I felt like I was on the verge of a nervous breakdown. After leaving I began to realize just how serious the emotional abuse was and how seriously it has affected me. I need help. I need a counselor who is trained in this. I guess this is how I found this site...due to my search for help.

So very true. I am in a verbally abusive relationship and could have written this article!!!

I find these articles on this topic fascinating. I don't want to end my marriage because we started this pattern only a couple years ago and it has spiraled out of control and we both know it. I'm sure we could use couples counseling but in afraid to have him make an ads out of me. Being bipolar these abusive exchanges cut deep . He tells me I'm imagining things. Or he'll say " that's not what I said" when I know exactly what he said. He will use whatever he needs to keep the upper hand. With others he is calm, almost sweet. This is crazy and I'm hoping to find a solution. He is 63 and I'm 53. I really don't want to start over. He will never admit or apologize to any of his behavior and his new thing is to not have a conversation with me.He says all I do is bitch. Maybe that's true.Thank you for the eye opening articles.

the description for the victim sounds more like a personal reflection than a general description. The first post you wrote about this was spot on. This one, not so much and also somewhat insulting.

Great article! This really illustrates how people can get locked into abusive patterns without realizing what is really happening. And many times outsiders never know about the abuse because of how well it is hidden by both the abuser and the victim.