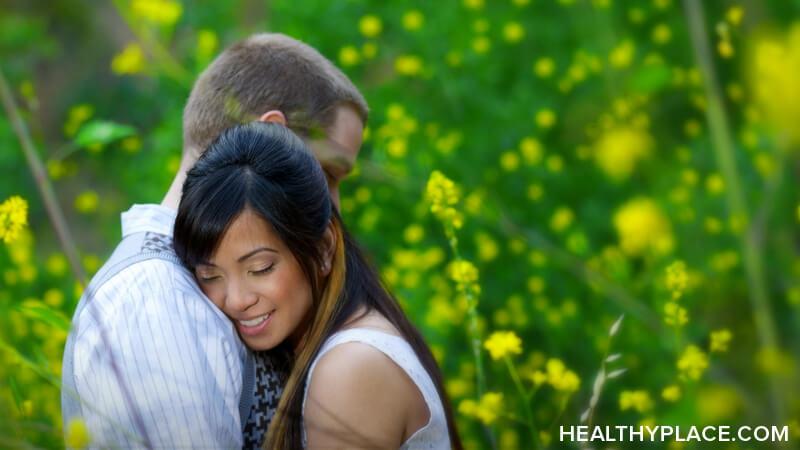 Giving affection to your abusive partner can trigger verbal abuse. Verbal abusers may lash out because they can't give affection. Don't get me wrong, they can provide acts of love when it suits them, but they aren't able to give and receive affection mutually. Often, verbal abuse and problems with physical contact go hand in hand: abusers may withhold affection or contact from partners as punishment, or criticize them for being too affectionate or needy. But it all boils down to the same underlying problem. If there's one thing my past relationship taught me, it's that verbally abusive personality types can't give affection in a healthy, mutually beneficial way, and this is why.

Hot one minute, cold the next -- we've all heard this used to describe a lover or partner. But what does it mean when a rocky relationship also involves verbal and emotional abuse?

The author and philosopher Alain de Botton explains in a short video, In Defence of 'Needy' People, that the problem of neediness doesn't necessarily lie with so-called needy people, but with their partners. A person's intolerance of a needy girlfriend or boyfriend comes across as hatred, when it is, in fact, it is self-hatred that keeps him or her from being affectionate in a reliable, consistent way.

Are Verbal Abusers Are Fuelled by Self-Hatred?

So what does this tell us about verbal abusers? Well, the theory explored by Alain de Botton suggests that abusers withhold love because they remain unconvinced of their own lovability. Because of this deep-seated self-hatred, they see us as gullible and weak for falling for their charms, and we end up becoming easy targets for their abuse.

But aren't abusive people self-assured and confident? Don't they consider themselves above everyone else? Yes, on the surface, but if you think about everything we already know about abusive personality types, the idea that they act out of self-hatred (rather than a hatred of their partners) fits rather well. Underneath, they are afflicted with a sense that it's peculiar to be loved or to love -- perhaps from their early relationships or due to trauma experienced as a child (Verbally Abusive Men and Women: Why Do They Abuse?). To an abuser who withholds affection, showing love is a precondition of weakness, not of strength as we know it to be.

Power over others is weakness disguised as strength -- Eckart Tolle

Here are some examples of verbal abuse triggered by affection, taken from my own experience:

Do We Have a Right to Affection Without Verbal Abuse in a Relationship?

It's worth pointing out that people have the right to their personal space, and no one should ever be forced into being intimate with a partner. However, lack of affection such as hand-holding, kissing and hugging, creates real problems in a relationship -- especially when such acts of love are withheld to manipulate a situation. In a relationship, both partners have the right to be comforted or hugged by the other, even during a disagreement.

So, what can we learn from this? That our "demands" for attention and affection aren't really demanding at all, they are merely polite requests for love and comfort.

What my ex-boyfriend saw as demands were just prerequisites of any romantic relationship: intimacy, discussion and honest communication. Perhaps these requests only came across as demands because, for better or worse, I was so desperate for the relationship to work that I'd forgotten how to show my feelings without worrying about "getting it wrong" (The Codependent Love Addict and Verbal Abuse).

We've learned that actually, the problem isn't that we're too needy. The problem lies, once again, with the perpetrator of verbal and psychological abuse. And it's not our problem to fix.

In Defense of 'Needy' People, The School of Life Youtube Channel, Feb 2017.

The Power of Now: A Guide to Spiritual Enlightenment, Eckart Tolle, 1997.

Hi. I'm essentially stuck in a relationship that I didn't want to be in in the first place. She won't leave. She won't move out. And being that she's always been a friend, I find it hard to serve her eviction papers.
I withhold affection, I withhold sex. I tell her my feelings about how I'm done with our relationship.
She demands hugs. She demands kisses.
I argued that, affection is something that should be offered, not something that's demanded. I try and google my situation and it seems like ever article I see is about how being a woman is ok and men are bad terrible human beings.
I'd be the guy depicted here. I'm a verbal abuser because I've had it with a failed relationship?