How to Recognize Covert Verbal Abuse 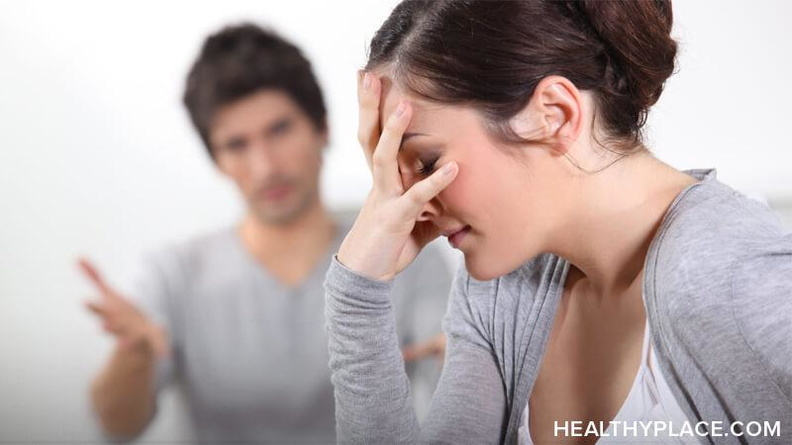 What is covert verbal abuse? When we hear the term “verbal abuse,” it’s easy to conjure up name-calling or demeaning comments spoken in anger. Verbal abuse isn’t always so obvious, however ("The Signs of Verbal Abuse").

One of the most dangerous methods of delivery is covert verbal abuse. This type of verbal abuse takes place when the abuser hides the abuse inside the context of the conversation during which the abusive comments are made. Abusers who engage in this type of behavior still intend to humiliate and demean the victim. Instead of doing it directly, however, they are able to deny that they intended to do so because they create an ambiguous situation where they can avoid responsibility.

How to Spot Covert Verbal Abuse

Covert verbally abusive comments can be disguised as neutral comments or even compliments. The context or sometimes their frequency gives away their true intent.

I once knew a woman who was very good at this. An evening together would include incidents such as the following:

She would come over and ask me what I had been doing. I would tell her that I had been writing. She'd say, "God, I'd hate to live with a writer. They'd just be sitting around in their heads all the time thinking." She would ask me to borrow some of my perfume, and I'd tell her to go ahead and choose some. She would then respond in a sour tone of voice, "Nevermind. I don't want to wear something fruity or sweet." The two of us would go out and if a man approached me, she'd later mention that she could tell he thought that American women were "whores" and that's why he had talked to me.

The comments did not attack me directly. Instead, they were comments about a group I belonged to, such as "writers" or "American women," or about things I owned, such as the perfume.  At first, I hadn't wanted to believe that my friend was intending to be hurtful, but as their frequency increased, it became impossible to ignore. Combined, the comments were designed to try to undermine my self-worth ("Signs Your Best Friend Is Verbally Abusive").

Covert verbal abuse is not always so subtle, however. Sometimes the attacks are more direct, but the abuser claims the abusive comments are not serious. This was how my ex-boyfriend tended to get away with covert verbal abuse. He would wait until we were in front of his friends and then make comments about my appearance or clothing, claim I was flirting with other people, call me insulting names, or refer to incidents that he knew had the power to hurt me.

Sometimes his teasing tone of voice alone was part of the abusive nature of the comments. Other times, if I became upset when he made a comment with a straight face, he would then claim I was being too sensitive and he was only joking.

Being covert about their verbal abuse can allow abusive people to avoid responsibility for the harm they cause. It can also have devastating psychological consequences. Covert verbal abuse can begin to erode the reality of the victim over a long period of time when abusers insist that they're not intending any harm.

I am reaching out to you for help/guidance by reading all of the articles related to abuse and narcissism via "Fairy Tale Shadows" because I am scared that this is what is happening to me, being inflicted by a man I love dearly. I am an intelligent, logical, analytical woman with a scientific mind so I am dumbfounded as to why I can't or won't accept that this is true. I then think that I am overthinking this and being too analytical and to "just go with the flow". The best way to describe how I feel is that I am the marlin and he is the game fisherman...keeps on playing me by making me feel that I am at arms length and then when he thinks he's losing me he says or does something amazing that reels me right back in.
This is probably not the right forum for this but I am feeling desperate and confused.

I feel your pain.

I felt like that for years until I realised what was happening thanks to a friend who told me to look up trauma bonding. Today is particularly hard, but then I re read the abusive texts and emails and ground myself in the reality that people who love you do not abuse you. He chooses not to abuse his colleagues or family so he does have control over his behavior. I have been no contact for 7 months after trying so many times before. Listen to your body, not your head. Trust your feelings. Thanks to blogs like Kristens I am reminded that I made the right choice.❤ to you. You're not alone in this x

Jane,
If it feels like it, it is. Your experience in valid. You are in the process of recognizing the abuse, which is a healthy place to be. If you don't know what's wrong you can't fix it, and you are recognizing some thing is wrong. You could leave, but you are still in love., yes? And that is hard to do. You can call him out on his stuff, by asking and identifying his bad behavior. Questions like, "what exactly do you mean by that?" Or even "Ouch! That hurt" after he delivers one of his hidden ambiguous abusive comments. There is something wrong with someone who does this to you, he jealous, he's insecure and perhaps a narcissist or all of the above. You allow what you tolerate. Don't allow anyone to put you down in any way and let them know you don't like it, set a boundary. If he respects it there is hope and perhaps couples therapy can help.

Hi Jane: What you are going through is a normal part of the cognitive dissonance of knowing on the one hand in your gut that he is hurting you and you don't feel safe, while not wanting to believe that is the case on the other hand because you are deeply in love with him. The conflict is the result of the types of abuse you have been subjected to that keep you from accepting the truth and making up your mind. Someone else mentioned a trauma bond, and I would second the recommendation to research the topic. Once you are ready to accept it, which is incredibly painful, the next steps will be to save yourself. I'm so sorry you are dealing with this pain-- this war within yourself is so incredibly painful. Please stay strong and keep educating yourself until you learn your truth. Thank you for reaching out and listen to the others. -Kristen

Thank you that was very helpful.

You are welcome, Kitten. Thank you for reading.