Opiates, such as heroin, codeine, oxycodone (OxyContin), hydrocodone (Vicodin), hydromorphone (Dilaudid), morphine and fentanyl (Duragesic) attach to proteins in the brain, with multiple effects. They reduce the perception of pain, and therefore, their most common prescription use is for pain relief. They also affect the reward and pleasure centers of the brain, and therefore, can produce a euphoric effect. Simultaneously, opiates depress the central nervous and respiratory systems, which can lead to minor side effects like constipation, but also respiratory or circulatory failure and death. 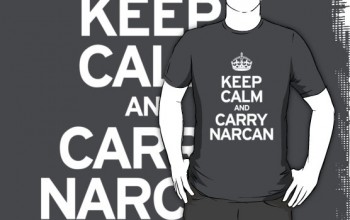 Naloxone works by physically pushing the opiate off the receptor and attaching itself there instead. Within seconds, the person to whom naloxone has been administered is thrown into withdrawal. While opioid withdrawal is extremely unpleasant, it is not, by itself, lethal.

The Opioid Overdose and Withdrawal Cycle

Opioid withdrawal is not, in and of itself, lethal. There is some concern, however, that naloxone could increase the likelihood of a second overdose. The reasoning behind this is as follows: Naloxone's effects wear off more quickly than the opiate's effects. So even though the person is technically in withdrawal, they may still have significant quantities of opiates floating around, waiting for an opportunity to re-attach. Then, if the person goes out and seeks opiates in order to relieve the withdrawal symptoms, they are more likely to overdose because they still have the previous round of opiates in their system.

Right now, very little data has been gathered about the opioid overdose drug--it is just too new. We do know, however, that naloxone has so far been effective in reducing death from drug overdoses in areas where it is in use. In December 2014, The Atlantic ran a feature on the drug, in which the author discussed naloxone use in Quincy, Massachusetts. In 2010, Quincy became the first town in America to equip its police force with the drug. Over the following year, fatal overdoses decreased by by two-thirds.

The more common argument against naloxone is that it encourages reckless drug use. The debate here retreads familiar ground: zero-tolerance-versus-harm-reduction territory. One school of thought says if people know they can be saved by a drug like naloxone, they are more likely to engage in excessive drug use. The other school says that in fact, millions of Americans are already engaging in excessive drug and they are better served by making a life-saving drug available (Treating Addiction to Prescription Opioids).

I would wager to guess that if you asked opiate users and the people who provide services for opiate users, the vast majority would say that addicted people are not thinking about whether or not their city has naloxone available before they shoot, smoke, or ingest an opiate. Personally, I have not been addicted to opiates, but I have struggled with (and nearly succumbed to) alcoholism. The deeper a person falls into addiction, they less they are able to care about anything other than feeding it. In other words, the idea that naloxone availability will increase drug use rests on the assumption that drug abuser are acting rationally when they are not. With or without naloxone, people will continue to overdose. I would rather live in a society where they can get this life-saving drug when they do.

What to Do When Old, Addictive Behavior is Leading to Relapse
New Addiction Recovery Program: Buddhist Recovery Network
David
March, 23 2016 at 3:20 am

............it doesn't help that we have troops in Afghanistan over seeing the poppy production. 120,000 hectares of NEW production in the last year alone. Let's be clear, this crisis is NO accident. And, U.S. troops in Afghanistan has NOTHING to do with freedom and everything to do with heroin. How many lost sons and daughters over there defending the world's heroin supply? How many have lost sons and daughters to the heroin itself? We are ruled over by the most heinous among us. Believe it.

Thank you for your comments David. I can't say that I know much about drug production. But you raise an interesting point. I can't tell you how many times I've heard people say they started on pills (either for a surgery or recreationally) and eventually went to heroin because it was much cheaper.

First time I've heard of this drug, thanks for sharing the knowledge! Although today I just read something on Health Canada - prescription no longer required there! http://www.cbc.ca/news/canada/british-columbia/naloxone-canada-no-prescription-1.3503316

Thank you for reading and commenting Sheryl. It will be very interesting to see how the new OTC availability in Canada turns out. Of course I hope it is successful in saving lives. I would also be interested to read more about what drug treatment availability is like in Canada.

Thank you for sharing your thoughts as well as all these links to articles Gary. I was wondering if you could say a little more about what you think the best route should be--proper training on recognizing the signs of an overdose? From what I have read about Naloxone (and I grant that it is not close to all the information that's out there) the drug should have no effects on someone who does not have opiates in their system. (If they do but they are not overdosing, that's a different, potentially dangerous story). Also, with regard to poly drug deaths, wouldn't administering naloxone at least give the person a better chance of surviving, or is it completely ineffectual on poly drug intoxication? I was under the impression that at least it would stop the effects of the opiates, thereby reducing the overall intoxication.

Yes Naloxone is benign for non OD's. Mandatory stabilice the patient first poly drug OD multiplies the affect of respiratory depression, supplying breaths mandatory. Hypoxia can cause heart dysrthymia giving Naloxone can increase this heart condition. Many areas are now handing out 4mg Naloxone nasal sprays this very large dose can cause fulminated opioid withdrawl a major complication layperson may not be able to deal with. Google Clinical Opioid Withdrawl Scale. Toronto's Mayor John Tory (knows his friends and family that never used a drug are being assaulted/murdered and said something) Toronto's Mayor and Barbara Yaffe MD MOH Quoted drug OD issue "Ventilations (rescue breathing) most important"
Chest compressions still being taught!! Read comment box YouTube https://youtu.be/CycS5GeylbM
Quotes Mayor above press conference at 37 minutes "When you have a CRISIS...one thing that often stands in the way...different protocols people have...that they have protocols that are well agreed upon...this person didn't tell me that...we have a different system here...this is what causes people to lose their lives quite literally." Drug OD can mimic any breathing emergency rescue breaths ASAP your life depends on this.
http://www.citynews.ca/2017/01/09/officials-meet-in-toronto-to-tackle-fentanyl-issues/
My deputation BOH March 20, 2017 https://youtu.be/uz7GBCZrRek
Information package given to all board of health members https://aliascpr.wordpress.com/2017/03/22/board-of-health-200317/
My letter ‘Flaws in Toronto’s Opioid Overdose Prevention Program’ EMN 2015; 37(12):31 With hyperlinks to Public Health Ontario’s training literature, and also the proper protocol.
http://journals.lww.com/em-news/Fulltext/2015/12000/Letter__Flaws_in_Toronto_s_Opioid_Ove…
Correct protocol Dr. Nicholas Etches Medical Officer of Health for Calgary district http://www.cbc.ca/player/play/895066691568/
Your pet eats a poison or drug Veterinarian will give respiratory assist and any antidote, not torture them with chest compression's only. Why would we allow this to our women and children?
It's a mental illness called Anosognosia a severe form of denial. Anosognosia is quite different than simple or temporary denial. It is not simply denial of a problem, but the genuine inability to recognize that the problem exists. Usually this is caused by brain damage and/or FEAR!
Agnotology is the study of culturally induced ignorance or doubt, particularly the publication of inaccurate or misleading scientific [medical] data. Agnotology focuses on the deliberate fomenting of ignorance or doubt in society. Google @GaryCPR for more info
Best Wishes

There is another aspect to this drug that is really scary to me. I am opioid dependent. I suffer from a host of illnesses and I have an implanted intrathecal pain pump. The medication I use is Sufentanil. I also take morphine for breakthroughs. I became very sick in 2011 and they had no idea at the time, as to what was wrong with me. I was unconscious when the EMT's got to me and they just assumed that I was suffering from an overdose. I was given Narcan. Needless to say, withdrawals set in. Wasn't a nice way to discover I had a congenital heart defect. With no one to speak for me, it could have turned out a lot worse. Don't assume everything is an overdose! https://m.facebook.com/story.php?story_fbid=1020232324738003&id=100002537369226e what

Thank you for sharing your experience Tanya, and I'm sorry you had to go through that. It does seem like there ought to be some way to determine if an overdose is the reason behind someone's state or not. Thank you for bringing this to my attention and the attention of the wider public, it's a very important component of this conversation.

This is a great blog post. I have been struggling with personal issues for 10 years and have found reaching out online to seek the advice of others has helped me through the good and bad time. I have always had relationship issues and have started to follow the advice of Dr. Robi Ludwig. I saw her on a tv show once and I really appreciated her take on current psychological issues. I have been following her twitter for updates and advice https://twitter.com/drrobiludwig?lang=en