The Spectacles of Schizophrenia

Schizophrenia has allowed me to glimpse into the hellish nightmare of realities and existence beyond the human condition. It has cursed me with falsehoods and phantasms that exist from elsewhere able to defy the human senses. What is this reality that plagues me? Scientists speak of chemical imbalances and psychotropic medication, yet the experience of psychosis feels more spiritual and surreal than any science textbook can describe. The very nature of my illness has allowed me to glimpse into a different dimension, that plagues the afflicted and strikes fear in others.

Schizophrenia Has Changed Me 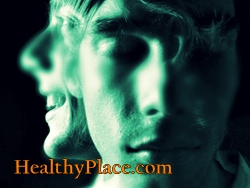 Consumed by this nightmare, I have become bonded and forever changed. Even now, recovered and outside its grasp, the thought of Schizophrenia frightens me. The idea of returning there scares me. Despite the pain however, it has given me insight and knowledge into mankind's fragility. It has given me humility and made me a believer in religion and alternate realms. It has taken so much, yet given these special gifts in return.

I see Schizophrenia, not through the spectacles of science alone, but through a metaphysical existence that defies the confounds of rationality. We are cursed with this forbidden perspective that, at times, makes our very existence questionable. Our behavior sometime becomes strange, making us question our own morality. Ethics becomes secondary to our undying beliefs in this world of impossibility. No amount of evidence can shake the foundation of our belief system as we do not simply believe in the impossible, we live in it. We can see and hear it where others do not.

We are an enigma to those around us. Our existence creates paranoia and fear in others, because our reality is as baseless to them as theirs is to us. These realities clash and sparks fly. A war is waged, but the winner is clear. A rationale based on physical existence, rather than metaphysical thought, is more utilitarian and less hellish.

Who knew a thought could be so destructive? That a belief system based on falsehoods could create such chaos? We are believers in impossibilities that cannot be rationalized. Thought, itself, becomes a weapon. This can make us a liability to ourselves and others. An understanding and curse that I will forever live with.

APA Reference
Hoeweler, D. (2013, March 6). The Spectacles of Schizophrenia, HealthyPlace. Retrieved on 2021, May 16 from https://www.healthyplace.com/blogs/creativeschizophrenia/2013/03/the-spectacles-of-schizophrenia

Schizophrenia Poetry Series
The Two Paths Of Schizophrenia
CoreySpenner
January, 6 2014 at 7:24 am

I was atheist before this illness struck me, now I see visions and demons all over the place. Sometimes I think I'm God or God is talking to me. Help me cure this!

I wish I could cure you, but I am unable to. I do not understand why some people recover and others don't. I really don't have all the answers, and can only tell you that you should probably see a psychiatrist who knows how to treat Schizophrenia. Hopefully you will be amongst the ones who recover.

Thank you,I to suffer from schizoaffective disorder. Bipolar type.You seem to have captured so many Protruths that define us.Thanks so much..IT REALLY HELPS TO KNOW WE ARE NOT ALONE IN OUR STRUGGLES.

Dan, you so acccurately articulate the experience of schizophrenia by highlighting the metaphysical and spiritual nature of it. My brother suffered from it and was absolutely brilliant as well as a spiritually minded person. The illness took him on a journey through hell that he experienced literally as hell. It is experiencing other dimensions, spiritual planes and with that my brother experienced tremendous pressure feeling it was all some sort of test he had to endure in order to fulfill God's will. It brings me comfort to read how well (and rationally) you describe the illness to others to help them understand. Until someone you love is going through it, it's very difficult to see it as anything other than just plain "crazy." Once you see someone you love and cherish go through it, your eyes are opened to horrors you would rather believe no one has to endure. Your survival, spirit and intelligence are truly awe-inspiring especially after having seen the devastation this puts someone through. Thank you for still being brave enough to face it and talk about it even after recovering from it. I cannot thing of anything worse a person could endure.

My son is 38 and has suffered from this horrible disease since he turned 16, brought on by smoking marijuana and a very shy personality at times. He has it in control but every now and then he gets horrible disgusting thoughts that send him nearly crazy but when he is well he is fantastic. The trouble is he is married and has a beautiful little boy but his wife finds it hard when he has his horrible outbursts, because he hates himself and thinks people will think so badly of him.
I wonder if anyone else can share their story and perhaps some suggestions to try and conquer this. I help him all the time but I worry when I am no longer here; will his lovely wife find it too hard.

However, human life and existence exhibit a great mystery, which one remain a coercive ground for scientific, philosophic and religious conceptions. The disentangle nature of schizophrenia has given an important contribute to disclose this provocative mystery. Your genuine observations give evidence to this statement. Furthermore, most of symptoms and suffering of schizophrenic patients are frequent psychic signs of mentally health persons through daily psychosocial problems and challenges as well. The ability to be critical and to correct these psychic spectacles distinguish mental health integrity from schizophrenic turbidity. Current psychiatric treatment and management of schizophrenia should be directed on willingness of respective psychiatric patient to face in adequate manner with many emotional and thoughts disturbances, as principal psychic disorders in schizophrenic patients.

Schizophrenia is living in darkness. If you truely understand what darkness is. Im not talking about pitch black. Im taking about the fear of not knowing if youll be attacked. The dellusion that you have it all together when your in the dark. Its a glum that hovers over you that you cant shake. Its the parania that causes you not to trust those closest to you. Its what will drive you to lose it to where you wind up some where if God shows favor on you in a psyci facility. Its the striping of your dignity. Its the humbiling of your spirit. When your mind is awake but you cant cummunicate. When its past caring if people are judgeing you, your minds on another planet. Where istolation is a warm blanket. And voices are telling you to good or to bad thoghts. Thats my description of it.

Regarding the article by Dan Hoeweler, my son, John, has had some of the described behaviors of Schizophrenia. How did Dan overcome his rationalisms in the impossible? My son truly believes some the impossibilities. Sometime I feel he is totally disconnected with reality.

Hi Dan,
This isn't directly related to your posting above. Instead - I wanted to give you an evaluation account on our new web-based software for people who suffer from schizophrenia or psychosis. Below is a little information about the program - please contact me at the email address listed if you would like to learn more.
Our new software program for people with schizophrenia is called "CopingTutor" and the first peer-reviewed paper has been published in the journal of Schizophrenia Research. The software is available at http://CopingTutor.com . It is the first clinically-tested web software that teaches CBT techniques and skills to people with schizophrenia and psychosis. It can be used either in concert with a CBT therapist (who might not have been trained in CBT for psychosis / schizophrenia), or as a standalone application in "self-help" mode.
This paper is documenting the successful first clinical trial that we did last year (at that time we called the early clinical research version of the software "coping with voices").
You can see the full paper attached, and a summary at this link:
http://www.schres-journal.com/article/S0920-9964(13)00015-7/abstract#
People might be interested in this interview with the developers and clinical researchers behind this clinical trial and product. That online video is at the link below:
https://www.imhro.org/brain-waves/online-cbt-schizophrenia-dr-jen-gottlieb-and-brian-chiko
Three more clinical studies are underway - including a 3 year long, 700 person Multi-site study funded by the Center for Medicaid and Medicare Innovation, and focused around reducing hospital admissions.