What Is the Freeze Response?

The body is a pretty amazing thing. Both animals and humans possess the fight, flight, and freeze responses when it comes to dealing with fear and trauma. These responses are what allow us to instinctively assess and deal with dangerous situations.

Imagine that you are walking along and come upon a rattlesnake that is poised to strike. Your body senses 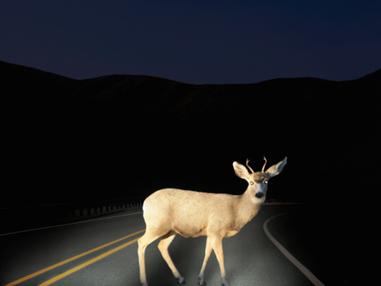 the danger, and you respond by quickly moving away or fleeing from the angry snake. This assessment happens almost instantly and instincts take over to get you away from the danger. The same goes for the fight response. Exchange the snake for an angry person who you know you can't outrun. Your response may be to try to fight that person instead of trying to flee.

The freeze response is a little different. Fight and flight responses have one thing in common: hope. There is hope that one or the other will get you out of danger and fear and return you to your normal state of being. The freeze response kicks in when there is no hope of fighting off, or fleeing from, the dangerous situation. It is the response that causes some animals to "play dead" instead of running or fighting, and sometimes it works.

The Freeze Response in PTSD Recovery

Keep in mind that the freeze response is normal; it's the body's way of trying to keep you safe. It can be very useful when you are facing a traumatic or terrifying event. However, it isn't something that you want to experience in most of your day-to-day activities. In those of us who suffer from PTSD because we have been traumatized in some way, the freeze response can be triggered even when there isn't anything to be fearful about. Symptoms of the freeze response include: feeling stuck in some part of the body, feeling cold or numb, a sense of stiffness or inability to move, holding breath, sense of dread, and even dissociation.

Ways to Overcome the Freeze Response

Check out this PTSD recovery video for some tips on how to overcome the freeze response.

Grounding Techniques For High Anxiety in PTSD Recovery
Using A 12-Step Approach for PTSD Recovery
Jeremy
September, 6 2019 at 10:15 am

To all of us who has PTSD, the main reason for even coming to this website is to find at LEAST a way to fight this symptom. I have been through multiple therapists in the past five years and they have helped greatly, but for people like me who have experienced a lifetime of a series of unfortunate events it helps to understand that we at least have PTSD possibly on a day-to-day basis (it maybe the case), if there is any possibility of finding a way to help fight this, please let us know.

It's very debilitating freezing to the spot I can't go anywhere on my own now, which is demoralizing as if coping with flashbacks wasn't bad enough. However I can tell you what works for me and hopefully it will work for you.
Ok when I freeze to the spot my wife or whoever's with me will put some lemon juice in my mouth or use smelling salts. This usually does enough to get my head moving and if you're like me the rest of the body shortly follows afterwards. The only problem is you're left with that horrible lemon juice taste in your mouth so take so mints out too. Hope this helps out till you get sorted pal

This has been happening to me, i havent been diagnosed ptsd but I have anxiety and depression and ive been going through a great deal of constant tragedies in my life, starting with 6 years of physical abuse. What happens to me is ill be in an argument and all of a sudden i feel like im trapped inside my head i cant move or talk. Id be screaming or trying to put my 2 sense into the argument or what their saying , but it feels like i cant like if i do id get introuble or hit. Like im actually scared too and even if i wanted to i wouldnt let myself.

So yours was the most informative of these videos on childhood trauma and the freeze response. So, my question is why can no one explain the freeze response? I mean, no therapist video or article explains this response as it happens, leading me to believe these therapists haven't even experienced what they are trying to explain. I have vivid memories of age 5-9 of this response in action, so I am wondering why no one can touch on this? I'm asking you because I have "black" memories but can remember the horror of this response and being stuck in a body that will not move. If you haven't, I can tell you about it. I have a MA and am not the typical crazy messaging you - I can only assume it gets bad. Let me know.

Read “Healing Developmental Trauma” by Lawrence Heller. Many therapists are are not trauma-informed. Lay book by Pete Walker “Complex PTSD: From Surviving to Thriving: A GUIDE AND MAP FOR RECOVERING FROM CHILDHOOD TRAUMA” is also outstanding. Both describe the freeze response, how and why it develops, how it gets triggered, and how to heal.

Freeze response occurs cognitively as well. Do you have any info on this.