Dealing With Medication Side-Effects When Recovering From Mental Illness

I remember the first time I was told I had bipolar disorder. I was twelve years old and confused. I was further baffled when my psychiatrist told me I would need to start taking psychiatric medication. I asked her what kind. I was certain that one pill--similar to the vitamins ground in my cereal each morning when I refused to swallow them--would be the same. I was told, in no uncertain terms, that it would be wonderful (!) if the first bipolar medication worked. Of course, it did not, and it does not for most of us.

What are the Worst Psych Med Side-Effects? 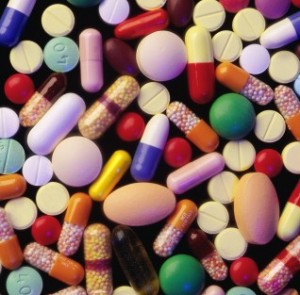 An example from my own life: When I was twelve, I was put on medications that made my small waist large. It seemed this happened overnight. Largely because of my age--feeling like I had to look like the other children--I refused to take medications that caused weight gain. It was explained to me, over and over and over again, that the weight gain would slow down and, they asked me, wasn't it better to be healthy and stable? Suffice it to say, I had no idea what stability was save for understanding that I did not have it. I jeopardized my own recovery.

Weight gain is one of the worst side-effects when taking psychiatric medication. Some of the best medications cause weight-gain and when you're feeling low, or a bit too high, the prospect can be frightening. We wonder: Will the weight gain stop? When?

I'm certain that we are all familiar with the exhaustion that often arrives alongside new medications. You start a new medication and find yourself in bed forty-five minutes later. You might wake up twelve-hours later only to have to take your medication again. When you have lived an active life, or even a life in which the ability to move was taken for granted, the exhaustion is frightening. We wonder: Will it subside?

Medications often affect our body and our mind. We might be fighting changes in our weight while also baffled by an increase in our appetite---another common side-effect. We might find ourselves standing in front of the fridge, half asleep because the medication has made us so tired, looking for something to eat. And forgetting we have done this the next day. Side-Note: When you find cracker crumbs in your bed it's a bit disconcerting.

Perhaps this is the worst of the massive lot: Changes to our ability to think. What do I mean by this? Well, we may have been unstable before, but the medications can make us feel confused. We can forget what day it is; put on pants that don't match our shirt, or put our shirt on backwards. I took medication's that made it impossible to read; the words in a book would blur together and my frustration became palpable.

I only have so many words so I need to narrow it down and mention these as well:

>Weight gain or loss. Yes, I talked about weight gain because it is common, but weight loss also occurs.

I could really go on here but it's sort of depressing.

Wait--Accepting? Perhaps we should think of this word in a different way. Think of acceptance as the understanding that side-effects usually do lesson or go away entirely. If they persist talk to your mental health care team and try something else.

We need to take recovery seriously, and without working to accept medication related side-effects, we cannot become well.

I try to think of it like this: Would I rather be a bit tired sometimes, have a few migraines, and be stable? Yes. Weigh the positives and the negatives and remember that self-care often helps us feel grounded and even eliminates side-effects.

News Flash! Living With A Mental Illness Does Not Make Us Crazy
Please, Stop Telling Us What Medications We Should or Should Not Take!
Evans
June, 29 2015 at 1:14 am

Nice comment .... "Fantastic writer, you are. Thank you. The whole weight gain thing is so overwhelming and of course, depressing. I apologise for myself all the time."

Most medication side effects go away...MOST, but not all. Severe weight gain can be detrimental to our physical health, too!
It took a while, but I finally found a cocktail that worked with little weight gain. Thank God!

I know what you mean about the mental confusion that meds give us. Iwork as a cashier and I constantly have to double check what I do. Sometimes I have trouble with numbers reversing them. SometimesI just forget to do a step. I have been working a year and a half and everyday I fear losing my job. Our family depends on that income. All I do is pray a lot and hope for the best. Time issues= if something happened two weeks ago I might not remember it or figure out that it was two weeks ago time i guess is relative.
Thanks for sharing

My Lithium works very well. But It is the sole reason I have Exploding Head Syndrom. I have been able to narrow it to the lithium usage as I have to go on and off it sometimes. It is hard to get appt.s with prescribing Dr.s because I have no insurance. The Exploding head episodes are easier to handle in the sleep now that I am used to them, HOWEVER, at moments of stress, I mean at ANY GIVEN MOMENT of stress of any kind, I cringe as if it could happen. As if an asteroid is shooting into our atmosphere and headed right for me. It makes it difficult to drive with my eyes half closed !

Fantastic writer, you are. Thank you. The whole weight gain thing is so overwhelming and of course, depressing. I apologise for myself all the time. Anyway, you're brilliant. I found you through Face book and will visit your blog again.
Fiona

You really hit the nail on the head girl! When they ask: Don't you want to feel "normal" again, like the new medication is going to do that. HA! I have recently had a 45 pound weight increase and it just doesn't come off like it goes on. This one side effect is one that causes me the most stress. Good article Natalie!