3 Herbal Remedies People with Anxiety Need to Know About

Do you know there are herbal remedies for anxiety? I have an extremely annoying neighbor. He was up all night laughing last night, which means I didn't get any sleep. This has been going on for weeks. Talking to him hasn't done any good. My anger and annoyance, fueled by sleep deprivation, are rapidly approaching homicidal ideation. Fortunately, there are three herbal remedies I know that help ease the raging anxiety.

Golden milk is an ancient Ayurvedic remedy. This herbal remedy for anxiety is good for just about everything, it contains turmeric, an herb which has shown promise as an antidepressant (Curcumin and major depression: a randomised, double-blind, placebo-controlled trial investigating the potential of peripheral biomarkers to predict treatment response and antidepressant mechanisms of change.). Research into turmeric's antidepressant effects are still relatively new, but it appears to work by increasing the production of serotonin and dopamine.

A study in the Journal of Affective Disorders reports:

From baseline to week 4, both curcumin and placebo were associated with improvements . . . From weeks 4 to 8, curcumin was significantly more effective than placebo in improving several mood-related symptoms . . . Greater efficacy from curcumin treatment was identified in a subgroup of individuals with atypical depression. 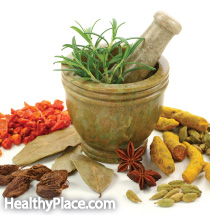 To make golden milk, first you make turmeric paste. Mix half a cup of boiling water with one-fourth a cup of turmeric. Stir constantly until it makes a thick paste, then add one teaspoon ground black pepper--the fresher the better. Add one teaspoon of turmeric paste to one cup of warm milk, add one-half a teaspoon of sweet almond oil, and enough raw honey to sweeten to taste. Vegan milk may be used in place of cow's milk.

Golden milk should not be used by people with gallstones or bile duct problems. Pregnant women should consult with their doctor before using golden milk.

Golden milk acts relatively quickly; I noticed a difference within half an hour.

The good news: anxiety herbal remedy flaxseed has been shown to be as effective as fish oil when it comes to mental health benefits. The bad news: you're definitely going to need to flavor the tea.

Flaxseed contains omega-3s and healthy fatty acids, which help the brain to function more effectively. Flaxseed has been found to alleviate stress, whether chronic, mild stress or chronic, unpredictable stress, in mice. Mice have metabolisms and psychological profiles very similar to humans, so flaxseed tea might work to lower anxiety.

There are many different ways to drink flaxseed tea, depending on whether you have meal or ground seeds. Here are the directions, according to Livestrong:

I like to add 1/2 teaspoon ginger, a pinch of cayenne pepper and some raw honey to flavor the drink. Cayenne and ginger may have anti-anxiety effects as well.

From the Sydney Morning Herald:

Ginger extract showed “significant antidepressant activity” in a study that was published in the "International Research Journal of Pharmacy."

My favorite ginger tea recipe is from Extending the Table, a Mennonite cookbook by Joetta Handrich Schlabach. The recipe, from the Dominican Republic, calls for one quart water, one sliced one-inch piece of ginger, 1/4 teaspoon ground allspice, and about 1/4 cup of brown sugar. Boil the first three ingredients and simmer for half an hour, then add the brown sugar. Serve hot.

One advantage of this anxiety herbal remedy is it also alleviates antidepressant-induced nausea.

These remedies are not meant to be medical advice and you shouldn't use them without consulting with your doctor. I'm just sharing what helps me when my anxiety is through the proverbial roof. What works for you? Have these remedies helped? Leave a message in the comments section.

Omega-3 for bipolar disorder: meta-analyses of use in mania and bipolar depression. http://www.ncbi.nlm.nih.gov/pubmed/21903025

APA Reference
Oberg, B. (2015, March 23). 3 Herbal Remedies People with Anxiety Need to Know About, HealthyPlace. Retrieved on 2023, February 5 from https://www.healthyplace.com/blogs/recoveringfrommentalillness/2015/03/three-herbal-remedies-people-with-anxiety-need-to-know-about

When Depression Causes a Lack of Motivation
Mental Health Crises and Calling the Police
Devbabbar
September, 26 2017 at 1:56 am

First and foremost, I love your blog! These remedies are very effective for anxiety without any side effects. Thanks for sharing this wonderful post.

Anyone know if you can take these remedies with other meds. I am afraid to take any herbal remedies because a lot of them interfere with other medications.

http://www.healthyplace.com/anxiety-panic/anxiety-information/herbal-remedies-for-anxiety…
This is a list of other herbs for anxiety, you can even buy some in the form of tea so you don't have to make it yourself. Of course ask your doctor first

Becky, I have recently found out that have Hikikomori it is a psychiatric disorder. same as a recluse in american. i debilitated because i was id-thefted which made me worse. it is listed in the dsm somewhere hikikomori is a japanese term, and worth reading about. Debra