There is a lot of stigma when it comes to living openly with mental illness. When I was a child, HIV/AIDS was the bogeyman. The stigma, driven by fear, was strong, which kept people from talking about it and contributed to the spread of the disease. People were afraid you could get the virus from a toilet seat, and the thought of touching, let alone kissing, someone with the disease was unthinkable. It was worse than a death sentence; it meant that you died a leper. Mental illness is where HIV/AIDS was 30 years ago. Living openly with mental illness equals feeling stigma.

Feeling the Stigma of Living with a Mental Illness Openly 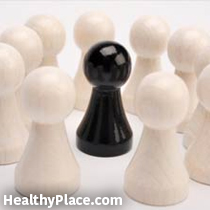 So how was the stigma conquered? Brave men and women came forward to share their diagnoses. Educational programs in schools became mandatory. People talked about their fears and those fears were dispelled.

We, as mental health consumers, need to do the same. But this decision is not for everyone, and it's not without its risks and benefits.

There is nothing to be ashamed of if one has a mental illness. The brain, like any other organ in the body, sometimes gets sick. When that happens, medication can help it recover. Living openly with mental illness is no different, in theory, than living openly as a homosexual--those who perpetuate mental illness stigma are uneducated and need to actually meet the people they fear.

Watch my video for more on the stigma of living openly with a mental illness.

APA Reference
Oberg, B. (2016, May 27). Stigma and Living Openly With Mental Illness, HealthyPlace. Retrieved on 2022, November 27 from https://www.healthyplace.com/blogs/recoveringfrommentalillness/2016/05/stigma-and-living-openly-with-mental-illness

How to Handle Repeated Suicide Threats
How Are We Supposed to Afford Mental Health Treatment?