What Doctors Won't Say about Medications: Side Effects

On one psychiatric medication for mood swings, I had wild mood swings so severe they left me unable to move. On a psychiatric medication for my alcoholism, I threw up and struggled with nausea. One of my antipsychotics has caused me to gain 70 pounds. One of my antidepressants has caused a heart condition that until recently would frequently put me in the emergency room. And most antidepressants have a black box warning label saying they can cause thoughts of death or suicide. As helpful as they are--I find my life to be much easier, side effects aside--psychiatric medications have side effects the patient has to learn to live with or find a new medication.

I've been on almost every major psychiatric medication and have experienced a lot of side effects. I have found which side effects I can live with. Weight gain and the heart condition I can deal with. Turning into a zombie, sleeping all the time, mood swings, and tremors I can't; so I've changed medications that caused those side effects. You have to decide what works for you. I can put up with weight gain and my heart condition if it means not being suicidal all the time, not hearing voices, not seeing things, and not being depressed. 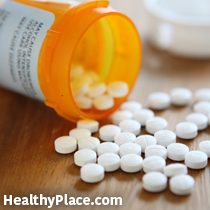 When I was in the state hospital, a medical error almost cost me my life. I demanded to speak to the doctor, but he refused to talk to me. So I did the only thing I could think of--I went on a treatment strike. I refused all medications and did not participate in groups until the doctor met with me. This lasted five days, and during those five days I was physically ill: shaking, nausea, pain, and so forth. Psychiatric medications are powerful drugs, and they have withdrawal symptoms.

It goes without saying that your symptoms of mental illness may return if you go off psychiatric medications, along with some severe symptoms similar to drug or alcohol withdrawal symptoms. When I went off my medications to join the military, I was so agitated my family begged me to go back on them. Going off the medications, plus the sleep deprivation and stress of training, literally caused a nervous breakdown that probably would have happened just from going off the medications. Psychiatric medications have withdrawal symptoms, and they can last for several days or even weeks.

I take about $1,000 worth of medication in one week. Thankfully, since I'm on disability, most of this is covered and what isn't covered has a small copay. Psychiatric medications are expensive--one of my antipsychotics costs about $300 a month. If you have coverage this may or may not be a problem, but if you don't have coverage you may find yourself unable to afford your medications. Since the enactment of Medicare Part D, many insurance companies have cut or eliminated their patient assistance programs--back before I went on disability, these programs were how I afforded me medications, along with the free samples the drug companies gave to my psychiatrist.

No one should have to set up a crowdfunding page to fund mental illness treatment so they don't die. This is as true for mental illness as it is for physical illness. We, as a society, need to come up with a way to help patients not have to choose between rent and medications, or food and medications. When the drug companies charge outrageous prices for cancer drugs, there's massive public outcry. We need that to be the case for psychiatric drugs as well.

How Are We Supposed to Afford Mental Health Treatment?
Self-Injury: What Few People Know About Self-Harm
Dr Musli Ferati
June, 13 2016 at 8:03 pm

The writer of this article is doing a great disservice to those folks who would greatly benefit from meds by focusing so much on the possible side effects! Those who would greatly benefit are going to be scared away after reading this article. Those who would greatly benefit from psych meds are going to use this article as an argument AGAINST even trying them! Since 1986, I have been on Prozac, Wellbutrin, m.a.o. inhibitors, Mirtazapine and Effexor... not all at the same time, of course! And if the side effects didn't diminish over time or were intolerable, my psychiatrist would try something else. In managing my depression, what worked best was a combination of anti-depressants and regular talk sessions with a psychotherapist.

Our stories are so similar! I've been on every classification of psych meds and had unacceptable side effects from the majority of them. My body also gets used to a med quickly, so I am constantly getting med increases or changes. Withdrawal, especially if not done right, is horrible. Then cost, luckily I have good insurance through my husband's employer, but between my psych meds and the meds to help counteract their side effects, I spend about $250 a month, but at times it's been as high as $600! Then my deductible for my therapist is $60. I owe a hospital over $10,000 from psych stays dating back to 2001, before I got disability. All illnesses are not treated equally!