Should Incarceration Include Mental Health Treatment?

Should incarceration include mental health treatment? My youngest brother scared his wife half to death once. He texted her from work, "We are all okay, but we just got robbed." His budget cell phone deleted the first part of that message, so she spent several hours trying to find out that a man walked into the Petco without a mask, demanded money (no weapon), and left plenty of fingerprints and a superb profile on the CCTV. He got away with $100. We later learned drugs and mental illness were involved (Treating Criminal Justice-Involved Drug Abusers and Addicts). He committed the crime because he was sick. That raises the question, "Should incarceration include mental health treatment?"

When a Person with Mental Illness Commits a Crime

In my town, Indianapolis, the number one provider of mental health services is the Marion County Jail. The Washington Post reports that there are 10 times more people with a severe mental illness in jail or prison than in a state hospital. There are a lot of people in the criminal justice system that shouldn't be there because we give psychiatric services to the lowest bidder.

When a person with a mental illness commits a crime, we need to assess them and determine where to go from there. Some deserve punishment, some can be referred to the state hospital system. The object of prison is to punish the offender so they don't re-offend. But we need to treat inmates with a mental illness so they don't re-offend rather than punish them for something they in all likelihood could not control (A Broken System: Mental Illness and Correctional Facilities). Recovery is real and possible for people who have committed crimes, but only if they get the mental health treatment they need. 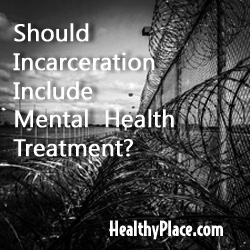 A friend of mine named Hector served in the 82nd Airborne during the Gulf War and developed posttraumatic stress disorder, which he self-medicated with drugs and alcohol. In the middle of a flashback, he fired a gun. Although no one was hurt, the police arrested him and charged him with felony discharging of a firearm (the charge is now a misdemeanor). As Hector was not an American citizen (he'd been told he was), he was sentenced to jail and afterwards given a lifetime deportation by a judge who thanked him for his service. He's celebrating his Fourth of July in a Mexican border town filing papers for repatriation.

Hector should have been sent to the hospital instead of jail. He would have benefited from treatment. Did he deserve punishment? Yes, and he paid his debt to society. But he also deserved treatment. This is not what he got. He is struggling as I write this because he has difficulty getting treatment--he can't go to the Veterans Affairs and Mexico's mental health system leaves a lot to be desired.

But in spite of this, Hector is recovering. He works with other banished veterans, helping them conquer their demons, find housing and support, and frequently keeps in touch with his family in the US. He is sober. Recovery is real, and every offender deserves a chance to recover, veteran or not. It's the moral thing to do.

My Story of Mental Health Treatment without Incarceration

The only reason I don't have a criminal record is the understanding of the Indianapolis Metropolitan Police Department. In my active addiction, my symptoms were chaotic, and I would often get drunk and threaten violence, or dissociate and threaten violence. The police would be called, they would see I was a mental health consumer because of specialized training, and they would take me to the hospital as an immediate detention (ID). I never spent time in jail despite committing crimes because the officers responding knew I was mentally ill.

I entered treatment against my will. I was convinced that I didn't have a problem other than hating my life. After managing to convince three psychiatrists that I was dangerous and gravely disabled, I was sent to the first of two state hospitals, where I got sober and stayed sober for three years after discharge. After the transfer to the second hospital, I got specialized treatment for my illnesses, and eventually learned not to drink and how to control my temper.

Jail wouldn't have helped me. It would have made me more likely to reoffend. Treatment does work, even if involuntary at the start. I'm living proof. Incarceration should include mental health treatment if the offender is mentally ill. The crimes may have been symptoms of the untreated mental illness. It makes no sense not to treat a sick person. If treatment can prevent a person from reoffending, then it's worth it.

The statistics in canada show that a "offender" in a psychiatric institution has a 30 % chance of reoffending, 60% reoffending rate in a prison. Dont have the stats website but that stats from the 2010's'- 2014's. Hope this helps answer your question a bit. God bless you

No soul can thrive in concrete walls.
No soul can survive behind bars.
Some are deemed unfit for trial in canada and go to an institution but not always prison. Some mental health issues are treatable outside of prison with medication.
Everyone needs support, in canada we see that support for mental illness amongst the lost souls on the streets who live a constant battle within their own body and souls. Some are war veterans, young kids, adults and seniors. Im sure this is a global issue. People need to be aware that prison generates money, hospitals do not. Ptsd is very real and i am grateful you raise the awareness and spread the poweerful message of your word and the truth. Why are children taught to learn incarcerated ? Why wouldnt we do the same for the mentally ill, it doesnt mean its right. If the person is not a threat to people or public or themselves then i do not agree with incarceration, however it is a liability and policy again that controlls the outcome. Canada once had great amazing ahead of its time psychiatric care and with cutbacks that facility was closed. It was callled riverview hospital and it was a hospital, it was closed 7 years ago and those patients are on the streets.