Recovery from Posttraumatic Stress Disorder: What Helped Me

There is a such thing as recovery from posttraumatic stress disorder (PTSD). I have had posttraumatic stress disorder since college. At one point, my symptoms were so severe I was involuntarily committed to the state hospital system. That was eight years ago. Now I'm living on my own and running a small freelance writing business and I recently published a Bible study for sexual assault survivors. My symptoms are usually manageable. Recovery from PTSD is possible, and here are three things that helped me.

I recently gave a talk to a church audience about one of my traumatic experiences--hospitalization in the state system. Long story short, abuse and neglect were rife, ranging from denial of medical treatment for appendicitis for several hours, to a staff member actually hitting a patient. I was stripped down to nothing--even bathroom breaks were on the staff's schedule. I had no choice but to seek my Higher Power in order to survive. I only got through the experience by the grace of God.

One of the best examples of a relationship with a Higher Power is in Fiddler on the Roof. Tevye argues with God, complains to God, jokes with God, and the villagers observe:

Even when our hearts lie panting on the floor.

How much more can one be joyful.

When there's really something to be joyful for?

There's a big difference between joy and happiness. You can be joyful--I prefer the term hopeful--even when life goes from bad to worse. You can have a sense of hope without happiness, but you can't have happiness without hope. And that hope comes from a Higher Power. 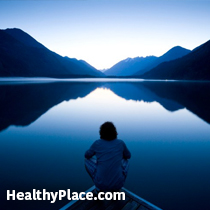 I didn't grow up in the healthiest of families, so by the time I reached college, I had no clue how to function in a world that wasn't hostile. It did not help that my depression manifested in college. I sought therapy at first as a way to stop the flashbacks, and discovered I had a lot of baggage. To use a construction analogy, you have to dig a hole before you build a foundation, and you have to have a firm foundation to build a house. And I was in a hole, getting referred all over Waco before I finally found a therapist who wouldn't give up after a few sessions.

The process of seemingly unending referrals began again when I moved to Indianapolis. Eventually, I moved across county lines to get the specialized treatment that was right for me--I was finally assigned a therapist who specialized in the worst cases in the system. If this happens to you, do not be discouraged--the right therapist is out there. Look for someone who empathizes with you, calls you on your self-defeating actions and beliefs, and is not going to bail when the going gets tough. Do whatever it takes to find the right therapist. If you had a physical illness such as cancer, you would not rest until you had the best doctor possible for your case. Mental illness is no different.

You have to recognize your limits and honor them by taking time to nourish yourself when recovering from PTSD. How you do this varies according to who you are. I spend my free time playing video games such as River City Ransom and Star Wars: TIE Fighter. I also have become a frequent player of a Christian game that is actually good (most aren't)--Journey of Jesus: The Calling. I take time to nourish myself by doing things I enjoy and things that benefit me. That's vital to recovery.

You are a strong person or you would not have survived up until this point. But even the strongest of people have limits. It is important to recognize those limits and not push yourself beyond them. Take time to be mindful. Take time to just be. Nourish yourself--it's the best thing you can do for yourself in the long run.

Those are three things that helped my recovery from PTSD. What have you found to be helpful?

APA Reference
Oberg, B. (2016, September 12). Recovery from Posttraumatic Stress Disorder: What Helped Me, HealthyPlace. Retrieved on 2021, May 10 from https://www.healthyplace.com/blogs/recoveringfrommentalillness/2016/09/recovery-from-posttraumatic-stress-disorder-three-things-that-helped-me

Three Lessons Vital to Rape Survivors
Addiction Is Not a Moral Issue but a Mental Health Issue
Mark chugg
September, 4 2020 at 6:57 pm

Hi there, my name is Mark and I am a believer also. Reading your message brought tears to my face. This is ok , just an emotion of my past cercumstancers, and being a victim. I want to thank you that I found your message and I will use your tools to help me, thank you so much, blessings through God, cheers Mark.

Hi there, Mark. I'm not the author of the blog, but have lived with C-PTSD my entire life and I also love the message in this post. Sending you strength! All the best of everything, Court

Recovery from PTSD is available now. See it at: Se-REM.com then be free.

Discovery is Recovery. Must discover your area in life. Once you find your purpose it seems that some joy and happiness follows.