Drug Abuse vs. Drug Experimentation: There Is a Difference 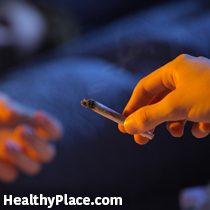 We need a better standard than all use of illegal substances is abuse. Doing marijuana twice over a six-year period is hardly a drug problem by any stretch of the imagination and it's foolish to say it is. We need to ignore the legality when determining drug abuse and look at conduct--what will the person do for the substance? Is the substance more important than anything else including food and shelter? Is the person willing to risk it all for the substance? If yes, it's abuse. If no, it's experimentation.

What do you think? Is there a difference between drug experimentation and drug abuse? Leave your thoughts in the comments.

APA Reference
Oberg, B. (2016, December 14). Drug Abuse vs. Drug Experimentation: There Is a Difference, HealthyPlace. Retrieved on 2022, August 9 from https://www.healthyplace.com/blogs/recoveringfrommentalillness/2016/12/drug-experimentation-vs-drug-abuse-there-is-a-difference

I have a 27-year-old who is addicted to steroid inhalers. She uses them about 8-10 times a day. Any suggestions would be appreciated.

I've heard of this, actually. Have you tried contacting the doctor who prescribed the inhalers for a referral to a mental health professional?