Anorexia Stole My Life: Reclaiming Myself in Recovery

For months, I have felt consumed by anxiety and depression. I would sit down to write something, only to feel that the blank screen was taunting me. I would attempt to read something for graduate school, but could only manage to read a few sentences until my mind wandered off into nothingness. At its worse, I would pace the house and twist my fingers into knots, trying to will away the anxiety and do something, anything, useful.

Today it hit me — anorexia nervosa has stolen key parts of my life and now I must fight to reclaim myself. 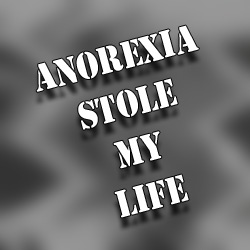 I have struggled with depression and anxiety all of my life. But nothing like I have since developing anorexia in 2007-2008 at the age of 42.

Anorexia didn't just steal my weight and my health during these past few years. It has been far more insidious. It has stolen some very important intangibles that I considered key parts of my personality, including my self-confidence, a strong sense of self-worth, and the belief that things will be okay in the end.

Now I struggle at times to write, and I have doubted my intelligence and abilities since I entered graduate school in August 2008.

This ties in with my self-esteem. I admit I did struggle with self-esteem issues, particularly surrounding looks, for most of my life. I often felt I was ugly compared to other girls. Still, I was able to move beyond these feelings and date and have relationships.

Now I often wonder why anybody would want to be with me.

Finally, in spite of depression and anxiety, I had this innate sense that things would be right with the world. I thought if I worked hard and went to college, I would be able to support myself and live a rich and full life.

Now I am look at the future and sometimes I'm terrified.

And these are the reasons I had to take time off from blogging—the anxiety was just too much.

Today I spent most of the day struggling not to cry because the anxiety was so bad. I went to see my eating disorders psychiatrist, who basically said everything is coming out now that I am not restricting my food intake and have been at my healthy goal weight. I'm being flooded by emotions and thoughts that I couldn't feel while in the midst of anorexia.

Then this afternoon I had an epiphany—anorexia is a thief that has stolen my self-confidence, my belief in myself and my ability to take care of myself, and my dreams of a full, rich, joyful and normal life.

I want back what anorexia has stolen. I want to again be self-confident, engaging, at times a dreamer and believer in miracles.

I want my personality back from anorexia. Like any thief, anorexia isn't going to just give me back the traits it has stolen from me. I will have to reclaim each trait myself, and nurture it until it is again part of me. I have to take back my stolen life.

APA Reference
Gambrel, A. (2011, May 6). Anorexia Stole My Life: Reclaiming Myself in Recovery, HealthyPlace. Retrieved on 2023, February 3 from https://www.healthyplace.com/blogs/survivinged/2011/05/a-stolen-life-reclaiming-myself-after-anorexia

Surviving ED — Taking Care of Myself As Part Of Recovery
Eating Disorder Recovery: One Bite At A Time
Kayla
January, 21 2013 at 4:16 pm

I suffer from this too, and it's managed to take everything out of me without me even realizing. I'm just now trying to get back on my feet and it's good to know that there is hope, although it's difficult to find my old spunky self. But I love your confidence for posting such a personal blog :)